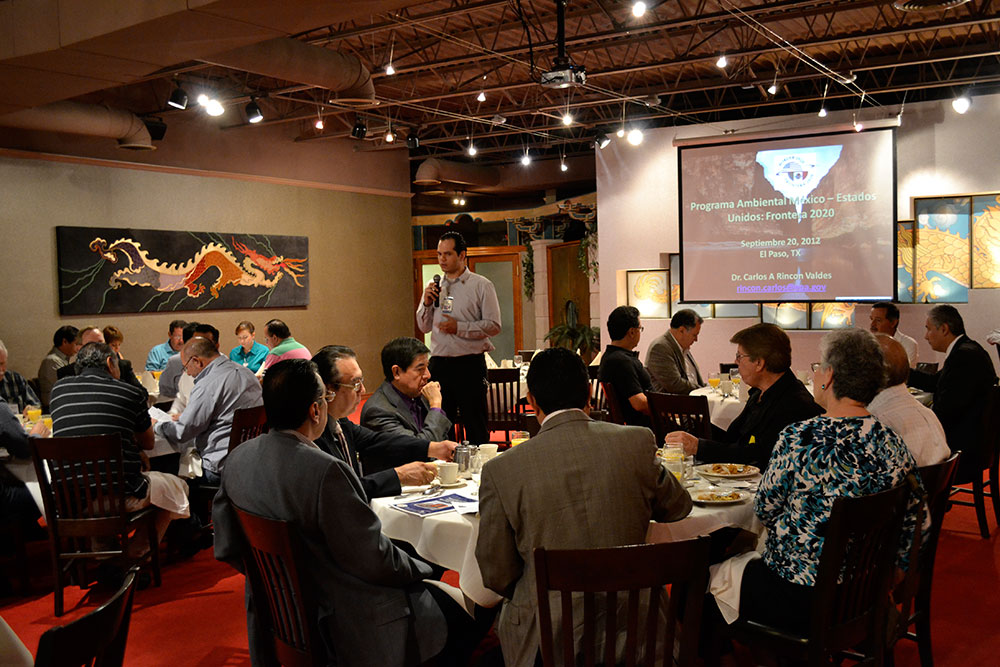 Miguel Gómez, former president of La Red, talks to a group of members at their weekly meeting on September 30th. (Hecko Flores/Borderzine.com)

EL PASO – The violence in Ciudad Juarez has had a huge impact in the cross-border area economy in recent years as businesses relocated here to become successful enterprises. The emigrating business owners, however, did not sever all ties to Juarez.

The drug war and the climate of criminality it spawned took a huge toll on the Mexican economy, closing down businesses, chasing away clientele and most importantly stemming cash flow. This caused a large number of establishments to slash prices, cut jobs and eventually just close down.

Many Mexican investors took a leap of faith and transferred their assets across the border to find a safe environment where their business would flourish. Miguel Gómez, former president of La Red, talks to a group of members at their weekly meeting on September 30th. (Hecko Flores/Borderzine.com)

Miguel Gomez, former president of “La Red,” a group of Mexican investors and business owners here moved to El Paso from Mexico City in 2004.  He sees El Paso as an economic “oasis” that has not been truly damaged by the American economic downturn of the past five years.  He cites three main factors – “First, our geographic location; second, the growth of Fort Bliss; and third, the flow of professionals and investors from Mexico.”

However, Mexican nationals have encountered many obstacles and challenges in order to open their businesses on this side of the border. “The legislation is very different and the rules for businesses are also different. It’s not easy and some are not prepared,” said Gomez. The El Paso Hispanic Chamber of Commerce (EPHCC) has helped open over 800 businesses that came from Juarez in the past few years. (Hecko Flores/Borderzine.com)

There have been some local efforts to help out these immigrants and their businesses. The El Paso Hispanic Chamber of Commerce (EPHCC) offers many services to this community and has helped open over 800 businesses that came from Juarez in the past few years.

EPHCC’s Cerrissa Cuellar claims that Juarez investors have always tried to “break ground” in the U.S. to reach a stronger market and the current situation has only accelerated the process.

“Many of the businesses that we council are present here [in El Paso] and in Juarez. They have always had the intention of coming over here and are not necessarily opening their doors here because of what’s going on over there – it only encouraged them to do it sooner,” said Cuellar.

Successful Mexican businesses have been migrating to the U.S. for more than 50 years. Paco Wong, 54, is a successful Mexican investor and restaurant owner in El Paso with over 30 years of experience. “These have been tough times for all of us in both cities, but recently I feel that there has been some growth in the culinary industry in Juarez,” said Wong.

Although Wong believes the trend is starting to change, the violence of recent years still has not allowed other types of businesses to “get back up on their feet” and has diminished their economic growth.

Pepe Yanar, 54, a Juarez furniture factory owner, was kidnaped in 2009 by a criminal group but managed to escape after being held hostage for 19 hours. He immediately fled his hometown and settled in El Paso along with his family.

“The insecurity in Juarez doesn’t allow us to feel safe. I rarely go now; sales in Juarez are low.  I can’t do much over there,” said Yanar. Investors from Juarez await for the best time to go back to Juarez. (Hecko Flores/Borderzine.com)

Even though Yanar suffered this traumatic experience and refrains from traveling to Juarez, he still keeps his business there and manages it through technology such as cameras and Internet telecommunications.

“I have an office here [in El Paso] and manage my business from there. I hope that someday I will be able to go back personally to manage everything myself instead of using cameras,” said Yanar.

Like Yanar, many investors in Juarez have found creative ways to hold on to their businesses as they await a recovery.

“We’re still putting our money on Juarez, I have faith and do not plan to open my business anywhere else. As long as we can make things work how we have done until now, we will stay there,” said a hopeful Yanar.