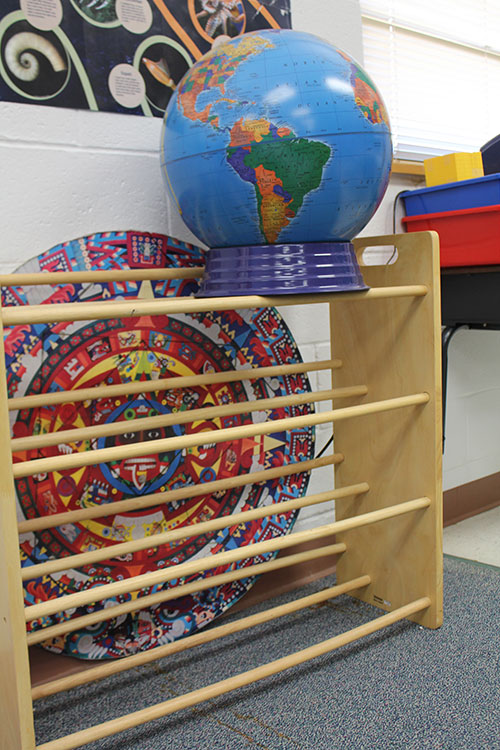 The calendar lies forgotten in a corner of the classroom. (Meili Robles/Borderzine.com)

CANUTILLO, Tx. – While many schools are integrating bilingual studies into their programs, one teacher went beyond the two-language system at Canutillo Elementary to include Nahuatl, the Aztec language.

Carlos Aceves, a fifth grade teacher at the school, began teaching Nahuatl and the Aztec calendar to his students in 1995. But in the same way that the Spanish did away with the Aztecs, the need to prepare students to take the state mandated achievement tests purged the Native American language from the curriculum. “The first year I did it without telling anybody,” recalls Aceves. “The second year the administration found out because I asked permission to do a school wide event.”

Luckily for Aceves, former principal Hector Girón was completely aboard and from then on Aceves and the children looked into the Aztec Calendar for cultural enrichment and insight into the traditions of many El Pasoans.

“Learning about the languages of our forefathers is very important, it’s something I think would be very beneficial to me,” stated current C.E.S Principal, Consuelo Parker. “For the past two years he’s taught Nahuatl to our children, but in reality when we’d really see him (teaching the Calendar and Nahuatl) was in the Christmas and Mother’s Day programs.”

According to Aceves, the Aztec Calendar enriches the understanding of literature and the sciences. “It’s a model for education,” he said. The calendar lies forgotten in a corner of the classroom. (Meili Robles/Borderzine.com)

Unfortunately this model is not necessarily understood by all administration and since Aceves’ move to teaching fifth grade rather than second grade the pressure of the State of Texas Assessments of Academic Readiness (STAAR) has forced this cultural learning experience back into the history books.

“Since he is a fifth-grade teacher, the curriculum is more emphasized especially because our children are transitioning to the middle school. More emphasis has to be given to core curriculum,” explained Parker.

Aceves, who also does workshops in the community as well as nationwide, highlighted how what he teaches can actually benefit the students rather than take them away from academic focus.

“I would teach them how the calendar was constructed using the human body. By doing that they would also understand high levels of geometry and other forms of mathematics. In reality, what I do could actually enhance the preparation for the test, but the pressure has become so great that the test is stifling innovation in education.”

Whether or not Aceves can reintegrate the Aztec calendar into his curriculum, students who have heard of the course or had him in the past remain very much interested in what he teaches.

“I know Mr. Aceves because one of my friends use to be in his class. He taught the Aztec calendar and taught them how to do Tai-Chi,” remembers Alderete Middle School student Vivyka Grier. “You can sometimes go anywhere around the world and you need to know a second language. I’d like to learn Nahuatl and more of the Aztec calendar. If he taught it outside of the school, I would like to go.” A garden that former Canutillo students planted as prescribed by the Aztec calendar. (Meili Robles/Borderzine.com)

“I remember he used to trace me to make the calendar. It was a long time ago but I know it had to do with your body and lots of math,” commented 19 year-old Canutillo Alumni, Jose Robles.

“I’ve done workshops all over, Community College, libraries…. I’m doing one in Austin soon, and at the University of Arizona in Tucson,” said Aceves.

While students like Grier may not be able to attend all out of state workshops, they know they don’t need to go that far to immerse themselves in a world of culture. In fact, C.E.S has a biologically diverse garden that former students planted as prescribed by the Aztec calendar.

“What the calendar prescribes is that you plant with diversity. That when you have diversity in your agriculture it is more productive, it is more sustainable. That garden is probably the most diverse garden in the region,” said Aceves with pride.

2 thoughts on “Nahuatl, the Aztec language that once graced Canutillo Elementary was displaced by pragmatism”