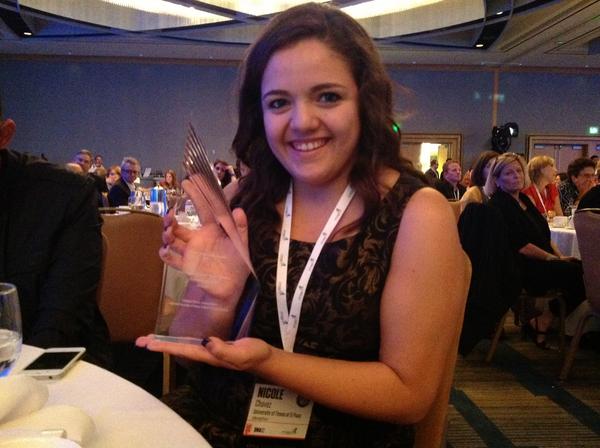 EL PASO – Winning a national prize for an outstanding piece of journalism like the one awarded to Borderzine’s Mexodus project last week by the Online News Association goes way beyond public recognition for a job well done.

To me the classy, foot-high triangular glass trophy that UTEP student Nicole Chavez brought home to El Paso is confirmation of what great work journalism students can produce when educators bust open traditional journalism classroom walls to create a teaching newsroom within the academy. That’s how we did it at our school on the U.S.-Mexico border five years ago when we created Borderzine, a web magazine by students about borders that is the capstone class in our multimedia journalism degree program and is run like a professional newsroom.  While some journalism education programs continue to resist technological and news industry changes, we’re proud to be in the company of major-league journalism schools that have adopted similar “teaching hospital” models.

Our teaching newsroom produced Mexodus, a semester-long reporting project about the exodus of Mexican middle class families, businesses and professionals fleeing drug war violence in Mexico.  The project broke linguistic, national and even professional-student boundaries by including nearly 80 students from four universities, two in the U.S. and two in Mexico, journalism faculty and news professionals like Lourdes Cárdenas, who has run newsrooms in the U.S. and Mexico.

The collaboration produced 22 professionally edited print stories and various multimedia, all of it translated and published in English and Spanish.  Trainers from Investigative Reporters and Editors, Inc. (IRE) came to UTEP to teach professors investigative reporting techniques that they in turn taught their students who used them to report and write the project.

The students delved into immigration databases to seek statistics on the growing number of Mexican citizens applying for investor visas and political asylum. They searched census reports for data on Mexicans fleeing Mexico, on the number of Juarez children enrolling in El Paso public schools. They interviewed demographers, businessmen, and sociologists. The result was solid journalism filled with facts, figures and compelling human-interest stories.

It was hard work taking more than a year to plan, teach, report, edit and translate and seek buy-in from news media companies willing to run the stories. The local newspaper, The El Paso Times, ran the series over two days on its front page.

Online outlets like Voxxi and FoxLatinoNews carried the stories.  Other news outlets and social media promoted the series through blogs and hyperlinks.  We are proud that two of the student writers on the project have since graduated and moved on, one to the graduate program at Columbia School of Journalism and the other to the Minneapolis Star. The El Paso Times says it wants to discuss future collaborations with Borderzine. We are already developing another idea for a long-form collaborative multimedia journalism project in 2013.

We are thankful that major media foundations, like Scripps Howard Foundation, Ford and Knight Foundations and Ethics and Excellence in Journalism Foundation, which provided the grant for Mexodus, have supported our vision of a multimedia teaching newsroom on the border.

We still have miles to go, but the road traveled so far has been worthwhile. Our recent multimedia graduates now working in Oregon, Minneapolis, Houston and Connecticut are proof.

To journalism educators who continue to resist journalism reform, I say: sí se puede.  We did it; you can too.