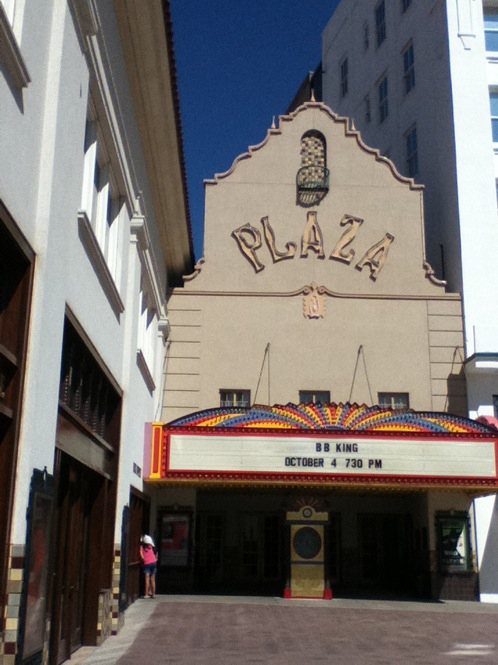 EL PASO – Nostalgia is a wonderful thing when you are well along in life. The memories of youth many times built around classic films are resurrected during the very rare film festivals held from time to time. Well, more than 80 classic films will be shown in El Paso in August.

The Plaza Classic Film Festival will be held August 2 – 12 at the historic Plaza Theater. The festival was created in 2008 to celebrate this country’s rich cinema history and rekindle the joy of going to the movies. Movie going in El Paso was a special time as the historic Plaza theater was an integral part of culture in El Paso for many years and seeing a movie there was a special event.

The Plaza Theatre, located in downtown El Paso, just up the street from the iconic Camino Real Hotel, was built during the Great Depression begun by Louis Dent and finished by Paramount-Publix of New York, at a cost of $1 million. In its youth the Plaza was referred to as one of the most beautiful theaters in the country and heralded as the “Southwest’s most perfect theater.”

When it opened on September 12, 1930, crowds swarmed the theater, enjoying its “atmospheric” architectural style. The design of the main auditorium was such that it made you feel that you were sitting in the courtyard of a Spanish hacienda. There was little argument that the Plaza Theatre was the grandest of the region’s movie palaces and the crown jewel of El Paso’s theater district.

The Plaza was originally intended to accommodate road shows and grand opera but it was primarily intended to show motion pictures, however, all things must come to an end and after a continuous run of over four and a half decades, the Plaza closed for good in the late 1970s. In a move toward modernization, there was even a plan in the works to demolish the grand old theater. But the plan to do away with what had long been part of El Paso life for over four decades angered a number of residents and grassroots efforts arose to save the Plaza from the wrecking ball. Pacino will present an intimate evening detailing his illustrious career in Al Pacino: One Night Only. (©Thomas Schulz)

In answer to the demands of the community, the El Paso Community Foundation stepped in to take up the challenge of saving, preserving and finally restoring the Plaza Theatre to its original grandeur. After many years of effort and almost $30 million in renovation costs, the Plaza Theatre once again reopened as the Plaza Theatre Performing Arts Center on March 17, 2006.

The Plaza Theater is now the home of the El Paso Symphony Orchestra and El Paso’s finest venue for music concerts and Broadway shows, however, movies have not been forgotten. The El Paso Community Foundation took the lead to fully restore this venerable movie palace to its historic glory: in the spring of 2008 the Foundation purchased and installed a state-of-art film and digital projection system and an enormous 50’ wide screen.

For generations of El Pasoans, going to the movies, meant going to the Plaza Theatre. It was the first public building in El Paso to have air conditioning and refrigerated water fountains. Such things are long remembered by the older movie going public. So it was with great anticipation that people looked forward to going to the movies at the Plaza once again. Thanks to the overwhelming community and corporate support during the Plaza Classic Film Festival’s first year, the festival has become one of the most anticipated events in the region’s cultural calendar.

The Plaza Classic Film Festival is more than a nostalgia trip down memory lane for older El Pasoans. One of the goals of the festival is to educate audiences about the history and art of the cinema and reawaken the joy of watching great films. With the help of special presenters and through educational outreach programs and film talks, the festival provides many opportunities to expand your knowledge and appreciation of these “classics.”

The Plaza Theatre is, without a doubt, once again one of the finest movie palaces in the country. It is also interesting to note that the Plaza Classic Film Festival is a non-commercial, all-volunteer effort and a special project of the El Paso Community Foundation. All proceeds from the festival go to the Plaza Film Fund to be used to provide grants to local filmmakers, underwriting for alternative film festivals and to support educational film initiatives in the area.

This year the Plaza Classic Film Festival will include more than 80 films including Breakfast at Tiffany’s, Duck Soup, To Kill a Mockingbird, American in Paris and many others. Among the presenters will be such luminaries as Tippi Hedren, star of Alfred Hitchcock’s classic The Birds, Eva Marie Saint, star of Alfred Hitchcock’s classic North by Northwest, Mary Badham of To Kill a Mockingbird and last but not least, the one and only Oscar winning actor Al Pacino. Pacino will present an intimate evening detailing his illustrious career in Al Pacino: One Night Only at the historic Plaza Theatre in El Paso, Texas, on August 4 at 7:30 p.m.

During this 10-day festival, the Plaza Theater, the gem of the southwest, will once again shine as brightly as she did almost 80 year ago. Audiences will participate in that brilliance as El Paso goes down memory lane during a night at the movies.