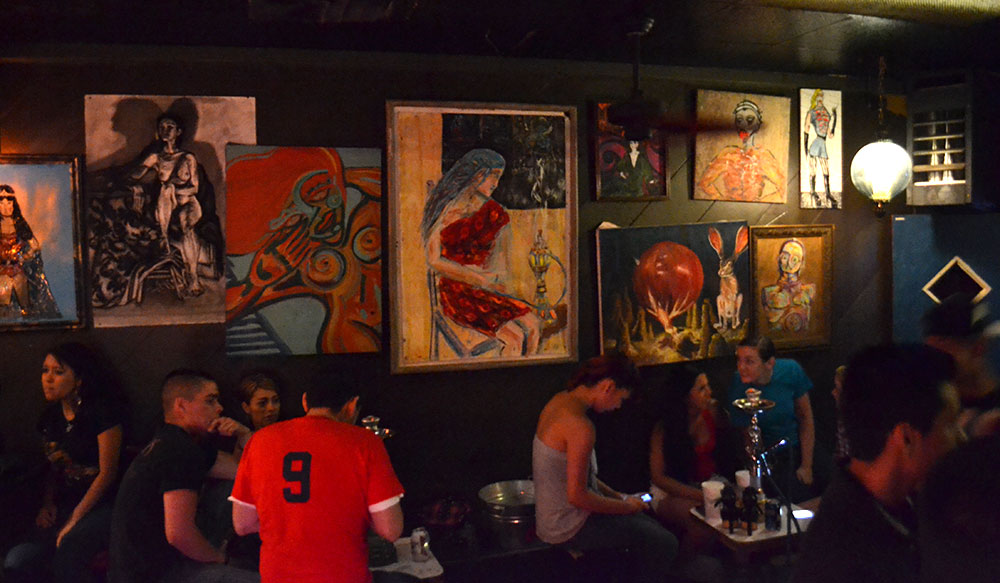 The Lounge also works as an art gallery. (Kristopher Rivera/Borderzine.com)

EL PASO – A new lifestyle is sprouting on the corner of Mesa and Rio Grande where the Sumatra Hookah Lounge weathered by a blend of cultures and creativity has become a point of origin for many talented artists in the area.

“The culture is kind of growing into more of like a musical inclined thing,” said David Zubia (bass/vocalist) of Squids Ltd. “We have a lot of electric music scene, and it’s kind of cool to see these rock bands come out and then connect with the crowd, have a good time with the crowd, and involve them.” The lounge also works as an art gallery. (Kristopher Rivera/Borderzine.com)

The Genesis of this movement began with the ambitions of David Aver, owner of Sumatra Hookah Lounge, took over the tavern from its previous owner on December 2010.

“With Sumatra it was primarily a hookah but there were so many young artists that would come and visit my establishment that I decided to kind of make it my mission to contribute to the community by providing an outlet for local musicians,” Aver said. “So as far as on the music side we’re having a lot of people and everyone’s welcomed.”

David Zubia, Stan Zubia and Manuel Hernandez have played a few shows at Sumatra and are an example of the local talent that use the venue as a starting platform.

“Even our first time playing here they hadn’t heard us,” David Zubia said. “They said, ’Yeah just come in and play,’ we showed them we’re pretty good musicians and we try, that’s how we do it.”

Besides the local music that rocks the venue there are vivid paintings that add a striking touch to the character of the venue. Local artists are allowed to display their art within the walls. What started as a hookah lounge is now a music venue and art gallery. (Kristopher Rivera/Borderzine.com)

“Local artists are encouraged to leave their artwork on the walls,” Aver said. “We’re also known as a gallery so if there’s any art that’s on the walls it’s usually for sale. Sumatra does not take any type of commissions for selling a piece of artwork.”

The dynamics of art promoted at Sumatra exceed just music and paintings. Poets and percussionists have performed at the venue as well. One band even chose to film part of their music video there.

We Are Augustines, an alternative rock band from Brooklyn, NY filmed a music video in Sumatra for one of their songs titled, Juarez. This band has made notable appearances like Late Show with David Letterman, Last Call with Carson Daly, KEXP Radio Live, and will appear at the legendary Leeds Festival in the UK. Aver said the band was intrigued by the culture on the borderland.

Sumatra has a back bone made up of mostly college students, however over the 16 months that Aver has operated the venue he has noticed something special about the individuals that walk in.

“Since I’ve taken over I’ve seen a huge influx of the Hispanic community, the displaced citizens from Juarez that are now in El Paso due to the violence, “Aver said.

Juan Carlos Bolivar and Efrain Del Pardo are two young men who found Sumatra to be their new safe haven after the spur of violence haltered the nightlife in Ciudad Juarez, Mexico.

“With all the violence and all that stuff I started living over here and so did Efrain,” Bolivar said.

Both Bolivar and Del Pardo wanted to find a spot that was original, fun, and had an underground feel, avoiding the regular night life spots in El Paso. They eventually discovered Sumatra and immediately felt connected to it.

“This guy was playing some reggae records with a turntable and the music was really cool, it was a really chill spot, we really enjoyed it,” Bolivar said. “I approached the owner about playing there and he was like, ’Yeah, you can come and play.”

Bolivar and Del Pardo make up a DJ duo that goes by the name, Mextape. They once played at parties in Juarez but now found a new home. Since their first set at Sumatra Mextape has established itself as a common act. “There’s so much talent here,” Aver said. “But also being an internationalized border town one of the things I think Sumatra is really encouraging is to be bicultural.”

Although Sumatra is in its infancy right now Aver said they have a ton of plans for the hookah lounge. He has an idea of opening up a Sumatra live music venue that will provide a bigger stage that can accommodate to two to three hundred people.

“For me to have this I feel like I’m obligated now to give back to the community and I enjoy stepping up to the plate and seeing if I could assemble an establishment or a hookah bar that can add to the night life in El Paso,” Aver said. “I get so upset and so angry when El Paso is compared to larger more developed cities such as Austin. Austin is great and fantastic but El Paso is fun too and I think we’re proving that by having these bars and having so much art around here.”