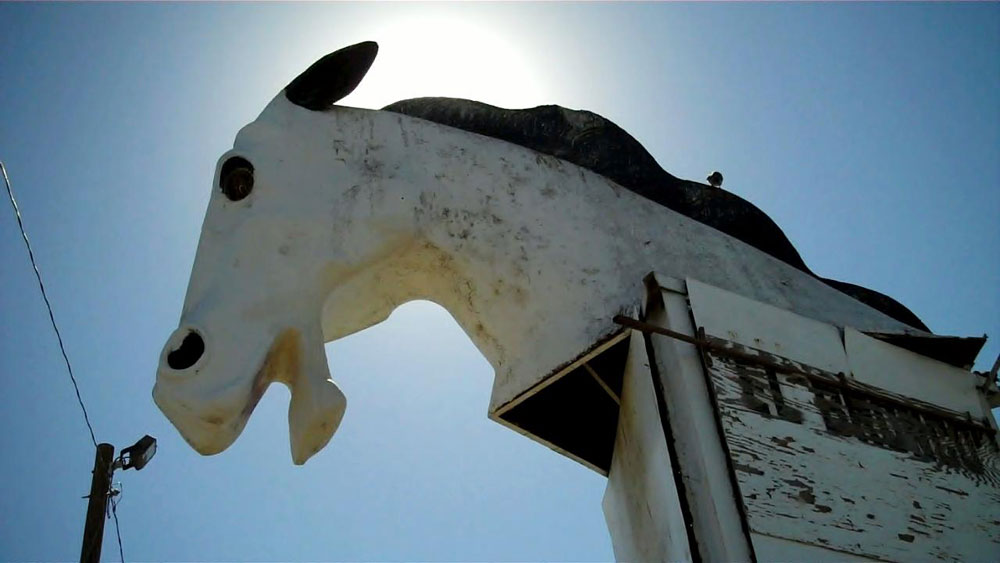 EL PASO – The aroma of fresh churros, the clamor of vendors and blaring radio stations and tables of bric-a-brac are the usual stuff of a border city flea market.

But between the bootleg DVD’s and fake designer handbags at the Bronco Swap Meet here customers unable to afford drug-store prices can also find cheap prescription drugs brought from Mexico. The Dance Hall/Swap meet sign sits in the front parking lot of the property. (Amanda Duran/Borderzine.com)

Vivian, who asked Borderzine not use her surname, is a single mother of four who has used the Bronco Swap Meet at 8408 Alameda Avenue for years to fulfill some of her family’s medicinal needs. After a close friend told her about the availability of prescription antibiotics at Bronco, Vivian said she found that she could buy medicines at a reasonable cost at that relatively convenient location.

“I have insurance from my work,” said Vivian, “but even with it, medical expenses are extreme and would significantly cut into my tight budget.”

Vivian said that at first she was very hesitant about purchasing antibiotics at the swap meet, let alone use them, but, when one of her daughters became painfully ill and she found herself in financial difficulty, she relented.

“My friend who told me about the place had used [the swap meet’s] products many times and said they had worked just as well as the ones from an American pharmacy,” Vivian said.  That reassurance plus having attained an official diagnosis and prescription from a U.S. physician left Vivian confident enough to try the illicit medication. She bought it and administered it to her daughter who was soon feeling well.

That incident was a few years ago and since then Vivian has relied on the Bronco for her antibiotics. She agreed to let a Borderzine reporter accompany her on a recent trip to the swap meet to purchase antibiotics.

“I know the Bronco doesn’t sound like the safest place to buy medicine, but it’s been a lifesaver,” Vivian said, “and I want to make sure people know that I’m not just guessing on what to give my kids. I do use my insurance to take them to our family practitioner and then bring his prescription along to the swap to use kind of like a shopping list.” “Don’t want to go to Juarez? We’ll go for you.” (Amanda Duran/Borderzine.com)

On that day’s shopping list – 100 milligram-strength Ampicillin for her third child.

Vivian and the reporter arrived at the Bronco Swap Meet on Alameda at around 8:30 a.m. on a Saturday morning. The place was buzzing with activity, but they were still early enough to find parking in the small lot.

They walked into a tiny air-conditioned shop within the confines the Bronco’s property. The shop mostly displayed diet, nutritional and vitamin products that are widely available in Mexico and legal to sell in the U.S. without a prescription. According to a shop employee, antibiotics are the only illegal product they carry and are bestsellers along with natural arthritis ointments.

Vivian approached the sales desk and asked for the medication she wanted. The antibiotics are kept out of sight and are only brought out for the customer upon request.

A woman who works as a sales clerk in the store agreed to answer some questions if allowed to remain anonymous. She works at the store part-time and said people buy from them because they have a need and are outraged and unable to pay the cost of medications in the U.S.

She does not currently have health insurance, but says even when she did she would still rely on the shop to attain certain medications because of the cost reduction when compared to American pharmacies.

“I remember growing up, we’d get sick and my mom would self prescribe and give us shots she would buy in Mexico,” said the store clerk. She said that even if you were to go into Mexico and pay a doctor to diagnose you and provide a legal prescription, it would still be cheaper than using your insurance to do the same process in the U.S.

“Mexico and its products were accessible before, but the recent violence in Mexico has promoted the business we can offer here,” the attendant said.

The store employee said she was unaware of who purchases the bulk pharmaceuticals in Mexico. She only knows that the store owner receives the products from a contact in Mexico and brings them into the shop.

The price of the drugs offered recently went up because the contact in Mexico who provides the items raised the prices, she said. Many food vendors dot the corridors of the flea market. (Amanda Duran/Borderzine.com)

The prescription products sold at the Bronco store range in price from $10 to $30 and are available in name brands and generic forms. The saleswoman said the owner only charges about $7 more than what the medications initially costs, “I tell her to increase her prices because what we are doing is too much of a risk, but she’s that type of person…she only wants to help people-it’s not for profit,” said the store attendant.

The employee said that the business in no way advertises its products. People become aware of them by word of mouth. “Those who know are like a family…a network, and they don’t cause us any concern for trouble with the law since they see what we do as a favor to them,” she said. “You don’t go turning your back on family who do favors for you.”

Another shopper at the swap meet said she is ‘out of the network’ and was previously unaware of the sale of prescription antibiotics from Mexico at the Bronco.

“I do have insurance, but I suppose if I was really desperate I would buy from them,” Cindy, a mother of three, said, “It’s dangerous in the sense you are running the risk of not knowing what you need and how much.” She also pointed out that you can’t be absolutely sure of the medicine’s potency and whether the label actually matches the contents.

According to the U.S. Department of State, any drug classified as a controlled medicine, including antibiotics, by the government of Mexico cannot be purchased in Mexico without a Mexican prescription. A federally registered Mexican physician must write the prescription. Mexican pharmacies cannot legally honor foreign prescriptions. Doing so can lead to arrest and a maximum of 48 hours of incarceration without charges being filed as allowed by Mexican law. A group of musicians and singers entertains for tips. (Amanda Duran/Borderzine.com)

The International Travel section of the U.S. Department of State warns that U.S. law enforcement officials believe that up to 25 percent of the medications available in Mexico are counterfeit and/or substandard. Such medications pose serious health risks to consumers.

The importation of prescription drugs into the U.S. can be illegal under certain circumstances. U.S. law permits persons to enter the United States only with “an immediate supply (i.e., enough for about one month)” of a prescription medication as defined by the U.S. Department of State.

According to the Texas Corporation Wiki, the Bronco Swap Meet and affiliate business with the Bronco name are on private property owned by Sandoval Capital, Inc. When contacted for any statement regarding their sales policies, the company representative who answered the phone declined to comment.