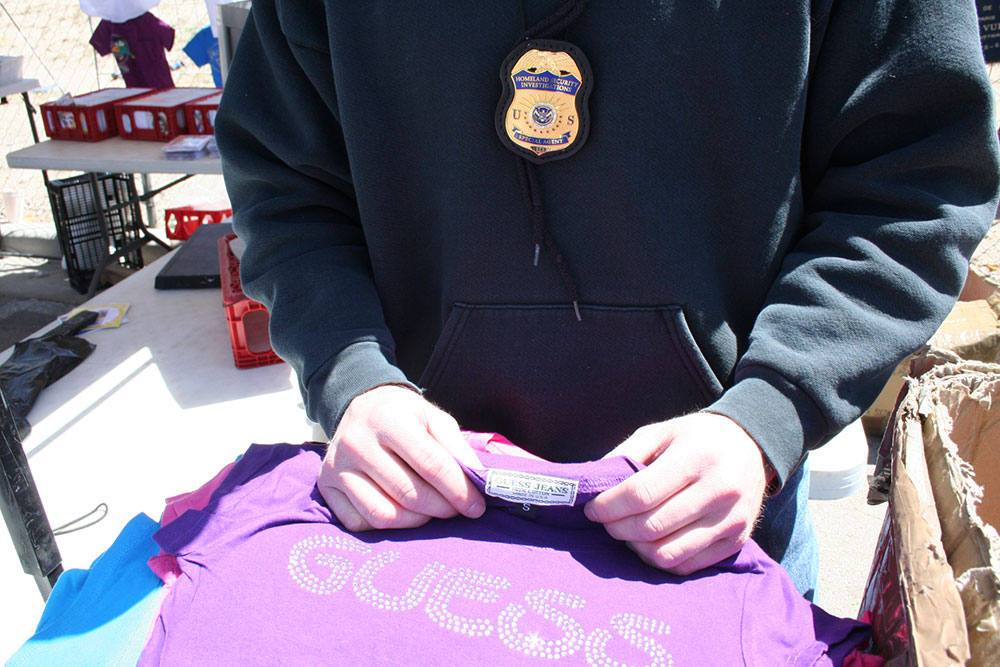 EL PASO – Federal agents in El Paso are investigating the link between counterfeit and pirated merchandise and organized crime, specifically Mexican drug cartels. According to U.S. officials, a knock-off Michael Kors handbag sold here can be connected to the bloodshed in Ciudad Juarez. “It (trafficking of counterfeit goods) is not a victimless crime as people would believe. You’re putting money directly into the pockets of the cartel. Those $15 that go to the cartel, could’ve bought a round of ammunition that killed an innocent person in Juarez.”

Hagelsieb said that not only does this type of criminal activity violate intellectual property rights laws, but it is now directly affecting El Paso and surrounding areas’ public safety and economy. The presence and criminal activities related to drug cartels, which are prominent across the U.S.-Mexico border, are filtering into El Paso. Acts of violence in Mexico have been confirmed by HSI in El Paso, Hagelsieb said.

As flea market shoppers strolled around the bustling parking lot, HSI agents inspected and boxed everything from pirated DVDs and CDs to fake designer purses and Nike high-heeled shoes. Months before the enforcement action in one of the oldest and most popular swap meets along the border in El Paso, HSI agents began following investigative leads and making undercover purchases of counterfeit merchandise peddled in Fox Plaza.

The investigation is ongoing. And while no direct tie has been made between Fox Plaza vendors of counterfeit goods and drug trafficking organizations, Hagelsieb said HSI has confirmed that connection elsewhere.

In Monterrey, Mexico, where Hagelsieb was assigned before taking the post in El Paso, members of criminal organizations have monopolized the world of piracy. He said that cartels leaders collect either a percentage from vendors’ sales, or they are themselves vendors profiting directly from sales of counterfeit and pirated goods.

“They (vendors) were either asked to give up their particular market, or they were killed off.” Hagelsieb added that cartel involvement has also been confirmed in Juarez. If vendors don’t give up a percentage of their sales or meet a specified quota, then they face the risk of being hurt.

This new surge in cartel involvement in counterfeit merchandise is a direct result of the high demand for fake merchandise. And cartels, opportunistic by nature, are taking over the bootleg business to make money. This money is being used to supply firearms, ammunition and other artillery to wage war between cartels.

“What you see here along the border, specifically in Juarez, you see a lot of threats and a lot of violence. We’re trying to educate the people that it’s not a victimless crime, and you (counterfeit merchandise buyers) are directly affecting lives. It’s a direct link, and we can’t just turn a blind eye,” Hagelsieb said. “If people would realize what the impact is, those vendors wouldn’t exist because there wouldn’t be a demand.” Patrons who visit Fox Plaza on the weekend do so as a weekly ritual. They indulge in the various foods offered at the swap and occasionally purchase a bootleg DVD or handbag. However, paying $50 for the latest Michael Kors knockoff handbag is no longer as innocent as one may think. People who purchase counterfeit and/or pirated goods are ultimately funding criminal organizations.

As a consumer, one might not necessarily be violating any laws by purchasing a pair of counterfeit Ray Ban sunglasses. However, the money spent on the knock-offs can load a bullet into the gun of a criminal.

Born in El Paso and raised in Cd. Juarez, Sofia grew up appreciating the best of both cultures by traveling frequently between the cities with her family. From an early age, she began reading anything she could get her hands on and from there developed a passion for writing. Sofia enjoys writing about the topics she is most interested in: music, technology, philosophy, and politics.