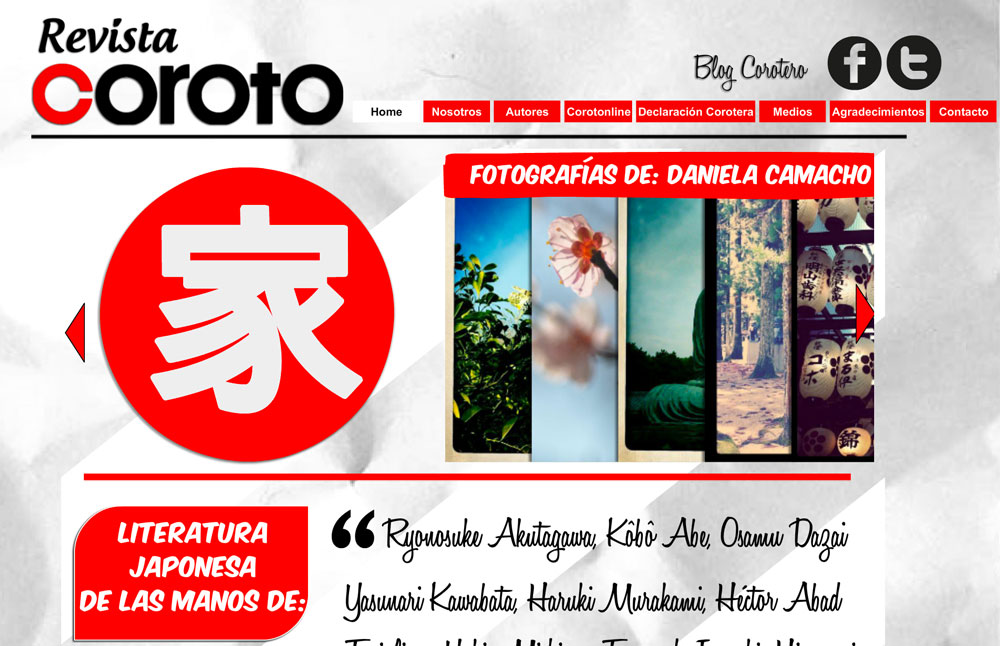 EL PASO – Webster’s dictionary describes serendipity as “an aptitude for making desirable discoveries by accident.” UTEP Master of Fine Arts in creative writing students Daniel Ríos Lopera and Daniel Centeno, and 2011 graduate Diego Bustos, could have written the book on serendipity – or rather the magazine – and it seems they have.

Revista COROTO is a slick literary magazine brimming with poetry, prose and photographs contributed by more than 20 writers, some of them Nobel Laureates and Cervantes Prize winners from five Latin American countries as well as France, Japan and England, all translated into Spanish. The first issue, printed in December 2011, is a compact, full-color edition with the theme El Fin de la Inocencia (the end of innocence). The weight of its 150 pages makes it feel more like a softcover coffee table book than a magazine, and the cover has a velvety feel.

The circuitous swirl of serendipity began when Columbian international students Ríos from Medellín, Columbia; Bustos from Bogota, Colombia; and Centeno, from Puerto de la Cruz, Venezuela, met in UTEP’s Department of Creative Writing while pursuing their MFAs. Centeno, with previous experience as an editor in Caracas for the publishing house Alfaguara, first joined forces with Ríos to produce the Rio Grande Review, a bilingual journal of contemporary literature produced bi-annually by two selected students within the creative writing department.

Ríos and Centeno flew to Washington, D.C. in February 2011 to present the Rio Grande Review at the Association of Writers & Writing Programs Annual Conference, one of the largest and most popular literary gatherings in the nation. Escaping a brutal winter storm that no one had been prepared for, they sat talking late one night in the warmth of their D.C. hotel lobby. To brave the cold, Ríos had been wearing his luchador wrestling mask since he had not packed a hat or scarf. (No, he is not a luchadora – he carries his mask because “It’s just funny!” he said.) Playing around, Centeno grabbed the mask and put it on, and moments later recognized Michael Wiegers, executive editor of Copper Canyon Press, striding across the lobby floor. Wiegers had spoken at UTEP on the subject of publishing poetry in the United States just a few months earlier. Forgetting he was wearing the luchador mask, Centento sprinted over to Wiegers, waving a copy of the Rio Grande Review in front of him. What followed in the next five minutes was the most unique ‘lobby pitch’ in history, ending with a superb literary contact for future marketing and networking – and a promised contribution of three poems by American poets for the next issue of the Rio Grande Review. Serendipity indeed. From left, Daniel Centeno, Diego Bustos and Daniel Rios are the UTEP students and graduate behind the Spanish-only literary magazine, COROTO. (Courtesy of UTEP Communications)

The creation of the Rio Grande Review sparked an idea in Ríos, who pitched the idea to Centeno – to publish a full-fledged literary magazine with a diverse group of contributing authors, completely in Spanish. They dreamed of a publication of literary integrity and beauty, with poems, essays, photos and graphics to showcase talent among writers and artists worldwide. The pair asked Bustos to join them. Bustos was very willing to brainstorm with them, but nearing his own graduation, was at first reluctant to jump on board.

“We convinced him,” Ríos said, smiling at the memory.

One obstacle loomed large – they had no money to become publishing magnates. Selling to advertisers was not initially considered, but has not been totally ruled out either.

“Of course, we want to sell magazines – but we don’t want to ‘sell out’ and compromise what we want the magazine to be,” Ríos said. Their intention is not another weekly news publication full of advertisements, but a high quality literary magazine, a work of art with faithful readers who will anticipate the next issue.

Starting first at the door of the UTEP Student Government Association (SGA), they began to seek financial assistance for their yet unnamed magazine. The SGA referred them to the on-campus offices of the Center for Research Entrepreneurship and Innovative Enterprise (CREIE).

Gary Williams, Ph.D, director of the center, and associate director Jeni Clark immediately recognized the potential in the idea and recommended they enter as a team into the Camino Real Venture Competition – a business plan contest where they could compete for startup money. Although the rigorous demands of graduate school prevented the trio from pursuing the competition, the idea and passion to create COROTÓ did not fade. The team continued to receive encouragement from the staff at CREIE.

“They [CREIE] are always on the lookout for other avenues of help for us,” Ríos said.

Ricardo Blazquez, a favorite professor among students in the graduate program at the College of Business Administration (COBA) and informal advisor to the COROTÓ team, said of this unique endeavor: “This is seriously one of the most amazing things I have ever encountered while here at UTEP. These three UTEP students have created this literary magazine which has garnered the attention of award-winning authors who not only praise their work, but have contributed their writing to the magazine’s content. It’s astounding.”

Bill Conwell, a UTEP lecturer who oversees the Corporate Engagement Project (CEP) in the College of Business Administration, which enlists the help of Master of Business Administration students to work with business owners on issues like supply chain management, HR, finance, and in this case, creating a business strategy to get a product to market, has assigned a group of MBA students to do just that for COROTÓ.

Daniel Martinez, one of several students appointed to work on the development of the business plan, said, “One of the most important things in developing a business plan for the creators of a new product or company is having a sustainable and clear idea of where you want to go, and a financially viable plan of how you want to get there. This is what we’re working on for COROTÓ.”

Laura Uribarri, assistant dean for MBA programs, said the fledgling publishing project “symbolizes the enormous synergies we can bring together at UTEP when students from different disciplines work together toward a common goal.”

“The business school has been blessed in terms of meeting these three students – the whole project is a reflection of everyone involved harnessing the power of the collaborative spirit of UTEP,” he said.

Starting with what literary contacts they had, the creative trio began to put the word out for authors to contribute. Submissions would be pro bono, so they were not sure what to expect or who would respond.

In the summer of 2011, Ríos attended a launch party in his home town of Medellín for famous Colombian author Alberto Salcedo Ramos, promoting his new book La Eterna Parrenda (The Eternal Celebration). He approached Salcedo about the idea for COROTÓ and to his happy surprise, Salcedo was enthusiastic about participating. Salcedo’s work can be read in the first issue of COROTÓ, and developing that contact has provided the team with many more connections.

Meanwhile, Centeno was in Guadalajara, Mexico promoting his own book, a nonfiction piece titled Retratos Hablados (Spoken Portrait) about famous writers, filmmakers and musicians from all over the world, when he was approached by international photographer, attorney and filmmaker Erick Estrada. Handing Centeno his card, Estrada said, “I heard about your magazine – I’d like to be involved.” Estrada’s work can also be seen in the first issue.

“Here we were, two Colombians and a Venezuelan – UTEP students living in the American border city of El Paso, Texas, which we consider quite exotic and diverse – promoting a Spanish-only literary magazine with authors from as far away as Japan. People were intrigued and it drew them to us,” said Ríos, still amazed at the course of events.

The target audience is all of Latin America – and the marketing strategy is still a work in progress. A website is up with an online version of the first issue at www.revistacoroto.com.

The team secured printing services at no cost for the first two issues from Juan Garza, director of the publishing department of Universidad Autónoma de Nuevo León in Monterrey, Mexico. But Ríos admits there will be a jumping off point in the future when they will need further industry guidance to successfully expand into mass printing and distribution in multiple countries.

The second issue – going to press any day now – is for the most part authored by Japanese writers whose work is translated into Spanish; with contributions from poets from other countries writing about Japan as well. A Mexican photographer living in Tokyo is producing many of the photographs.

At the recent launch party for COROTÓ, hosted by the Consulado General de México en El Paso, the wine and cheese affair put an exclamation point on the consulate’s help to the team.

“They have helped us find talented writers, cover some costs, seek out financing and acted as a liaison to the press and broadcast media,” Ríos said. “Their help has been invaluable.”

The bright young founders of Revista COROTÓ did not know exactly what to look for on their journey to publication, but it seems that special “something” – the magic of the written word, the accidental good fortune, a little help from their friends and the rewards of their passionate efforts – has sought them out at every twist and turn, serendipitously.