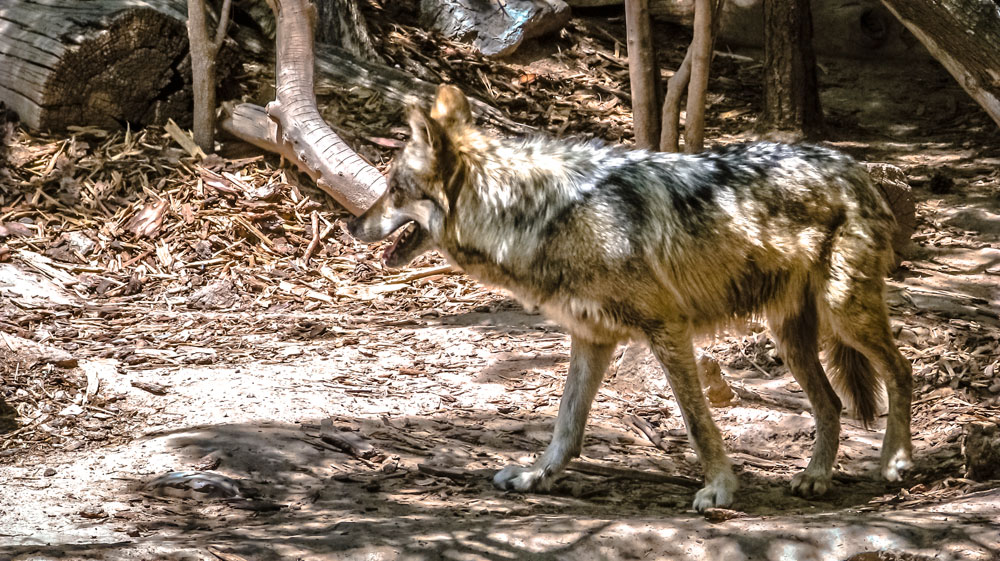 The Mexican gray wolf is a subspecies of the Gray Wolf. Mexican wolf at the El Paso Zoo. (Ezra Rodriguez/Borderzine.com) The Mexican gray wolf is a subspecies of the Gray Wolf. Mexican wolf at the El Paso Zoo. (Ezra Rodriguez/Borderzine.com)

EL PASO – After almost 14 years of effort to reintroduce the Mexican gray wolf into the American southwest, less than 60 lobos roam today in the 4 million acre territory along the Arizona-New Mexico line.

It seems that life is not getting any easier for the lobo. In 1970, predator control programs almost drove the wolves into extinction until efforts to reintroduce them started in 1998.

Currently in New Mexico and Arizona only 58 Mexican wolves survive, according to the U.S. Fish and Wildlife Service.

In 1998 wildlife officials estimated that by 2006 the wolf population would have reached 100 in the region. Federal trapping and shooting and illegal killings have contributed to keeping the numbers of Mexican gray wolves low.

Even though it is rare to encounter one of these creatures in the wild because of their small numbers, humans are the main threat to their existence.

Poachers and ranchers have shot many wolves illegally. Others have poisoned wolves both intentionally and unintentionally by the use of pesticides.

Groups such as the New Mexico Cattle Growers Association have opposed the reintroduction of wolves since the program began.

“The New Mexico Cattle Growers Association does not support the reintroduction of wolves because the program has been a complete failure from its beginning because the plan did not take ranchers into consideration,” said Caren Cowan, Executive director of NMCGA.

Many ranchers share the belief that wolf reintroduction has not worked. Their main opposition has been concern for the protection of their livestock.

“It’s impossible to come up with a number for lost cattle, you hear everything from hundreds to tens of thousands, it’s somewhere in between that” said Cowan.

In 2010, the National Agriculture Statistics Services reported predators throughout New Mexico had killed 9,900 head of cattle, a $5.3 million loss. Wolves accounted for 2.4 per cent of that number. Only nine confirmed livestock depredations by wolves were recorded that year.

Ranchers who have been affected have been reimbursed according to the Center of Biological Diversity website. Wolves usually prey on large animals, but if given the opportunity they will hunt down young animals.

The NMCGA does not believe the amount paid by the reimbursing program is enough to cover for the loss.

“The compensation program is just a band-aid on the problem, the program didn’t take into account that a heifer could have given birth to 10 or 12 more calves” said Cowan. A head of cattle is valued at $894 and a head of calve is worth $354 in New Mexico according to the United States Department of Agriculture (USDA) Cattle Death Loss report for May 2011.

Like every living organism, the Mexican gray wolf plays an important role in their natural ecosystem by keeping the populations of prey species under control.

“Wolves, target the weaker members of elk and deer herds, this is a way of keeping the herds healthy because they lower the number of ‘weak links,’” wrote Breanne Cordier, the research technician in the Behavior Lab at the New Mexico State University, in an email.

In the 1920’s gray wolves were killed off in Yellowstone National Park, which had a dramatic impact on the ecological balance of the area.

“Elk and deer population had gotten too large and had began to over-graze areas immediately on rivers and creeks, which decreased vegetation that birds used for nesting, beavers used for habitat, insects used for food and fish used for concealment,” said Cordier.

Mexican gray wolves also compete with other canines for territory. Coyotes have accounted for about 25% of the total cattle losses in New Mexico according to the USDA Cattle Loss Report.

“If wolves where to be completely killed off, the coyote population would grow too large for a healthy balance,” Cordier said.

“In the case of coyote overpopulation, rabbits and rodents may drop in numbers, decreasing the prey base for owls, hawks, falcons, snakes, and other species. This would also potentially affect the dispersal of plants, as rodents and rabbits spread seeds by eating them then passing them in their feces,” said Cordier.

The Mexican wolf, a subspecies of the gray wolf, is the smallest and one of the rarest gray wolves in North America. On average, a Mexican gray wolf weighs between 60-80 lbs. and is about the size of a German Shepherd. Male wolves are typically heavier and taller than their female counterparts.

Like most wolves, Mexican gray wolves live in a complex social structure of extended family groups known as packs. The packs consist of a breeding adult pair (alpha male and female) and their offspring. This social hierarchy of dominant and subordinate animals in parks is what helps the pack to work in harmony.

Mexican gray wolves are known to prey on large hoofed mammals, referred to as angulates like elk and deer. They also eat small mammals like rabbits, squirrels, and mice. The social problems arise on the rare occasions they prey on livestock.

Their mating season starts in the first two months of the year. Female wolves have a gestation period of about 63 days and may give birth to four to seven pups.

Pups are born blind and defenseless and are taken care of by the pack until they reach to 10 months. In captivity, wolves are known lo live up to 15 years.

The Mexican wolf was listed as endangered under the Endangered Species Act of 1973 with efforts to keep the species alive starting in 1982. But it was not until 1998 that the Secretary of the U.S. Department of Interior gave approval to reintroduce 11 Mexican wolves to the wild in Arizona and New Mexico.

Defenders of Wildlife have been joining forces with Arizona and New Mexico landowners in efforts to keep cattle and wolves apart. In 2010, Defenders of Wildlife aided in the installment of fences and the employment of additional range riders in order to help avoid conflict between prey and predator.