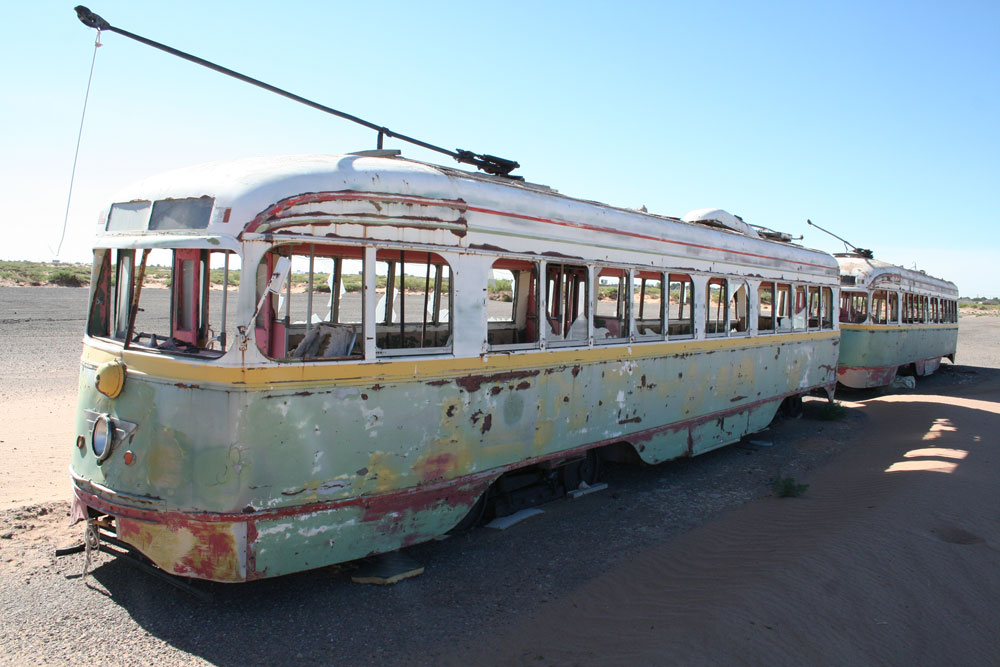 A street car service was present in the El Paso/Juarez area from 1881 until 1974. (Amanda Duran/Borderzine.com)

EL PASO – In an effort to explain the longstanding and sometimes complicated ties between border city El Paso, Texas and its Mexican sister city Juarez to fellow classmates at the School of Visual Arts in New York City, Peter Svarzbein decided to create a fictional advertising campaign for the revival of a trolley system that would connect the two municipalities.

But he never expected his hometown to incorporate his graduate thesis art project into an actual city planning proposal that could possibly stimulate the economy in both countries, and reduce the risk of drunk driving accidents.

“I wanted to challenge the negative media representation about the border by using the media itself,” said Svarzbein.

Svarzbein, who now lives here, hosted a presentation on the El Paso Transitional Trolley Project recently at the University of Texas at El Paso. His talk, entitled Bridging Borders, was sponsored by UTEP as a part of the school’s DYNAMIC Communication Lecture Series. A street car service was present in the El Paso/Juarez area from 1881 until 1974. (Amanda Duran/Borderzine.com)

Svarzbein, 31, said his intentions were never to push the project into reality, but now that his ideas have gathered support from local residents, he said he is very excited to see the concept receive passionate enthusiasm from others. “It’s hard to have a better future for ourselves as a city if you can’t even imagine one,” said Svarzbein.

The better future he imagined was proposed in the thesis in the form of a poster ad campaign because he thought that medium would have more lasting impact than the more traditional methods of an essay or documentary. Svarzbein said the method he chose to go with was unexpected and would therefore actually get people to stop and question what they were seeing and perhaps get excited about the possibilities.

Svarzbein started working on designs for the logo of his faux international trolley in February of 2010. Before and during the project, the eager artist spent some time researching the streetcar system that did, in-fact, once exist connecting Juarez and El Paso.

The original streetcar line that once ran throughout the Southwest sister cities was viewed by Svarzbein as a reference to a happy time in the history of the metropolis, where frequent commutes between the two cities was the norm for the majority of citizens and reflected a positive relationship between the U.S. and Mexico.

A street car service was present in the El Paso/Juarez area from 1881 until the Juarez counterpart objected to further operation in 1974. The fixed rail streetcar system was the first bi-national trolley system in the world. Currently, six of the nine trolley cars that were once generously used now sit rusting away in a lot at the El Paso International Airport. The fixed rail streetcar system was the first bi-national trolley system in the world. (Amanda Duran/Borderzine.com)

El Pasoan John Chacon, present at the presentation given by Svarzbein, encouraged the artists’ point that the streetcar system would serve as a metaphor for a thriving relationship between the two cities. Chacon reminisced about the Sunday trips he would take with his grandmother to Juarez via the streetcar system. “As a kid, the streetcars were something to look forward to, and an adventure themselves.

With the finalization of the official logo for the El Paso Transitional Trolley Project complete, and installment of Alex the Conductor, the project’s official mascot, Svarzbein and friends set to work in early 2010 putting up posters throughout El Paso county. Most of the images were concentrated in high traffic downtown areas including pedestrian bridges and abandoned buildings, most notably the old location of the El Paso Saddle Blanket Company store.

“We were aware that there were various instances of people calling the city to find out more about what exactly these posters were all about,” said Svarzbein, “and that is kind of exactly what we wanted– to generate dialogues about what is and what could be.”

Svarzbein noted that in June of 2010, the same year that he launched his ad campaign, his mother sent him an article from the El Paso newspaper about a local city council member who had seen Svarzbein’s posters around town, received numerous questions about them, and took an interest wanting to revive the very same streetcar lines that influenced Svarzbein’s project.

That same summer, the now graduated artist had the choice of staying in the Big Apple or moving back to El Paso where he could “fully embrace what the ad campaign could be.” He came home and hopped aboard the border, spearheading the now bona fide advertisement campaign he had launched as a student project.

Svarzbein and El Paso city representative Steve Ortega say that reviving the streetcar lines is the key for future economic development on both sides of the border. An estimated $80 million dollar price tag is attached to making the system become a reality according to a 2010 Cambridge Systematics study.

Representative Ortega tries to ease the sticker shock of the proposal’s price by noting that the two freeway overpasses currently in construction over Joe Battle Boulevard will cost about the same amount as reviving the trolley system. Ortega points out that the overpass construction has received little if any negative feedback from the community based on the amount it will cost to complete.

Aside from expected traffic delays during construction, there is little to no opposition to freeway projects, yet the trolley revival-another transportation endeavor is having a difficult time gaining similar support.

The main trolley route would run from the Paso del Norte International Bridge in downtown El Paso to UTEP. According to Ortega, between 5 million and 7 million pedestrians would utilize the streetcars annually, making the city’s initial investment turn into a 12 to one return in dollars over a span of 15 years.

Proponents of the fixed-line system are hoping that with continuing support from the public, their cause will make its way into El Paso’s upcoming November $500 million Quality of Life bond election that will determine which projects the city will pursue and invest in during the coming year.

Svarzbein, Ortega, and other promoters of the fixed rail streetcar trolley system insist that the negative environmental impact, cut down on drunk driving and promote tourism.

Ortega said that with San Antonio currently in the midst of finalizing its own streetcar system, El Paso would be the largest city in the country without a similar installation. Svarzbein says the city needs to get with the program or else be left in the dust while other cities benefit from downtown revitalization.

Svarzbein says that those amazing retro streetcars that now sit abandoned in an airport lot are very viable options for restoration should the project make headway. Feasibility studies have been done, according to Svarzbein, and the results indicate that in fact the bi-national trolley system could be a reality with the abandoned cars once again in use.

The historic streetcars are currently for sale by the city, but Svarzbein says, “instead of selling our history, we should celebrate it.”