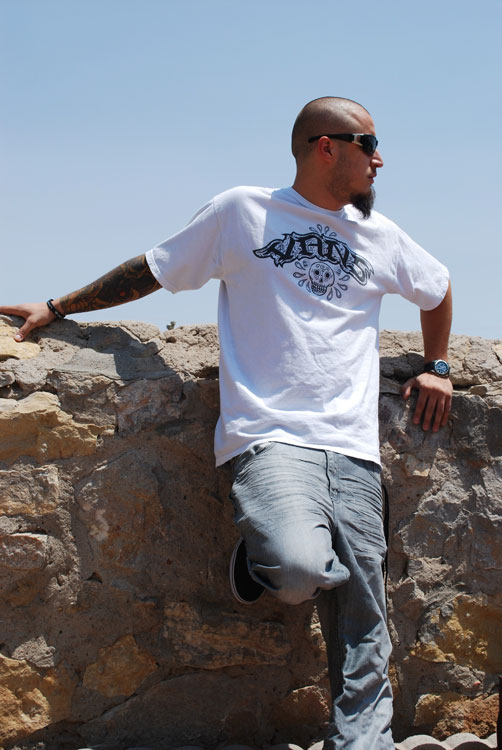 At age 16 El Paso’s Steady began compiling verses in his school notebooks. He still keeps all the old notebooks in a box. Although he admits he’s come a long way from those initial rhymes, he still recognizes his attachment to them. He looks back to what he wrote in his youth and can see how much he has progressed since then, now 10 years later.

“My music is not about ambition, but personal expression,” Steady said.

Looking past Steady’s rowdy exterior  – 6’3”, shaved head and tattoos on all his extremities – you see a musician interested in the power and complexity of words. His lyrical Hip Hop style is self-described as multi-syllabic. Meaning that the artist rhymes multiple words with each other within one sentence.

He says that rhyming that many syllables in one sentence is a difficult feat that many musicians do not master. Steady says that he has rhymed up to 14 syllables at a time in some of his songs, placing him in a unique position amongst others in his genre.

“The greatest thing that music gives me is a way to express myself,” Steady said.

The lyricist has been keeping busy preparing his third CD launch. The material he didn’t use for this album, he reworked and developed into a book entitled, The Thinking Man’s Game, which is to be published soon.

Aside from these two upcoming projects, Steady adds to his plate by playing in a reggae band called Steady Shakedown and is a member in the group called G.O.D and many other collaborations with other artists here.

Recently, Steady has started to perform Spoken Word, which he says allows him more freedom in writing since he does not have to key to a melody or tempo.

Advances in technology and networking sites have changed the game in music from performance, editing and distribution to promoting, but according to Steady the new availability of programs, software and equipment have also made it easy for uncreative people to claim the title of musician. Music according to him has taken a nosedive due to the easy access to specialized music programs.

The borderland doesn’t have a shortness of musicians, he said. The proof according to Steady is the multitude of music shows that are held on any given day of the week in all parts of town. All of them reflect the large number of musicians trying to get heard by El Paso audiences. In Steady’s own words he sticks out like a sore thumb among other hip hop artists in the city. Mentioning that many artists currently follow trends to find profit and lack creativity and passion for music.

Steady’s influences are drawn from personal experience – love, religion, and pain. The most difficult part of writing a song, he said, is relaying a message and making the music mean something to others.