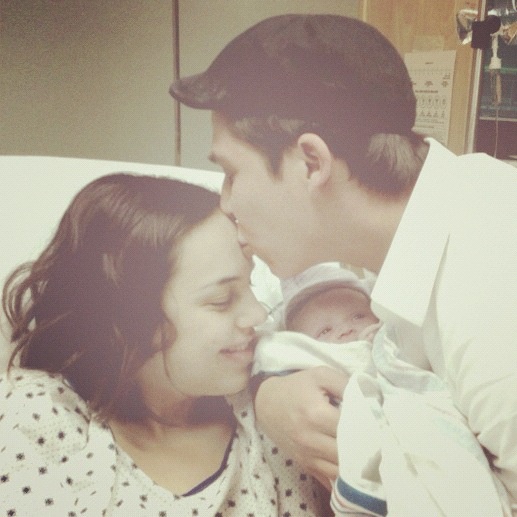 Welcome to the world, Lucca! Happy first Mother's Day Natalia! Papa Beto looks like he will be a wonderful father. (Courtesy of Natalia Strobach Oronoz)

EL PASO – With Mother’s Day upon us, I am reminded of how mothering skills are acquired.  Most of the world thinks mothering comes naturally, including women, until they have their first child and feel completely helpless. Pregnancy does convey some sense of connectedness to what will likely become a beloved child. Your body is invaded for nine months, so whether birth is the culmination of incubated love, or the relief of having your body back, it is truly a shocking miracle to be holding your first child. What you don’t yet know is that this tiny thing, now outside yourself, will engulf you for the rest of your life, and until you learn how to swim in these waters, the “you” that once existed may drown forever. In some countries and in some families, there isn’t even an expectation that your prior self is important enough to resuscitate. Welcome to the world, Lucca! Happy first Mother's Day Natalia! Papa Beto looks like he will be a wonderful father. (Courtesy of Natalia Strobach Oronoz)

I believe that we can learn to become good mothers and not drown ourselves in “motherhood.”  But we can’t do it alone. By itself, the birth of a child does not convey any substantial knowledge about how to care for it.  Older women can help if they themselves have not been swallowed. Fathers can help if they can recognize the dilemma; the problem is that it has never been a dilemma for fathers. Fatherhood is about provision and protection, not about being swallowed by a role. Fathering, moreover, appears to be optional unlike mothering. Books can help, but friends going through the same thing can probably help the most, even if it appears to be the blind leading the blind. The experience of mothering has given me great joy in my life, but it didn’t come naturally. I managed to heal some of my own childhood wounds and expanded by memory of joy in other memories by sharing them with my children.  It was and still is awe-inspiring to watch their worlds grow ever larger along with their navigation skills. As adults, I find them interesting and stimulating to talk to about almost any subject. I don’t think I would have experienced such joy had motherhood been forced upon me or had I not been able to do additional things with my life. Wild creatures in my neighborhood don’t have the same luxury as I did; the cats in heat on my street are repeatedly stalked and raped. Every single female is impregnated every single spring.  They usually have their kittens in our yard. A silly young finch has decided to make a rather messy nest in a dead palo verde tree limb in the front yard, killed by the great freeze of 2011.  Accompanying new life are new mothers, without whom life could not continue, but the cat and bird mothers I have been watching seem almost as inept as new human mothers. The finch’s nest, aside from being messy, is not concealed in any way. It has no shade and no protection against sun or rain or wind. It has already rained on the nest. It is so loosely woven, it looks as if the eggs could fall through; the feral cats will be waiting for that, or for fledglings to fall out. The good thing is that there will be an abundance of sunflower seeds for the young ones to feast on.

Two of the pregnant cats were just adolescents themselves, less than a year old. Each of them had only one living offspring. We know that one of them had a kitten that died. The living one was moved to the fig tree, where it was thoroughly watered before I realized it was there. The older mother, who we now believe is deaf, had three kittens. When we found an adoptive home for the first kitten, that mother decided to steal the older mother’s kittens. So, we had quite a circus repeatedly returning stolen kittens to their biological nursing mother from the ever vigilant one who was no longer lactating, but with whom the kittens went willingly. Why are these feral cats having kittens in our yard? Our neighbor feeds both the cats and the pigeons in the neighborhood and does not make any attempt to claim them as pets or take them to be spayed or neutered. Every spring, my daughter tames and feeds kittens in our yard and then finds homes for them. This year she was able to tame and find a home for one of the mother cats as well. It seems to be a never-ending process, since she is rarely able to tame the mothers.

Most human mothers think anything less than an optimal outcome is their fault. They think everything is their fault, and society tends to support that notion. I think this idea lays more guilt than necessary at the feet of the mother. If there is only one child, it is easy to believe that what one does is so important, but if there are two or more, it is obvious that each child is unique and different. All mothers are also different, just like all children. The mama cats were all different as well, and so were their offspring. There probably is not one right way to mother; there are probably hundreds, but they have to be uniquely tailored to each child. And I personally believe that both mother and child are liberated when the mother has outside interests, activities, and accomplishments. It gives both of them room to breathe, unencumbered by expectation or guilt.

Now that the season of kittens is over, I have my eye on the bird’s nest. I want to see what becomes of that experiment.

2 thoughts on “A Mother’s Day note”