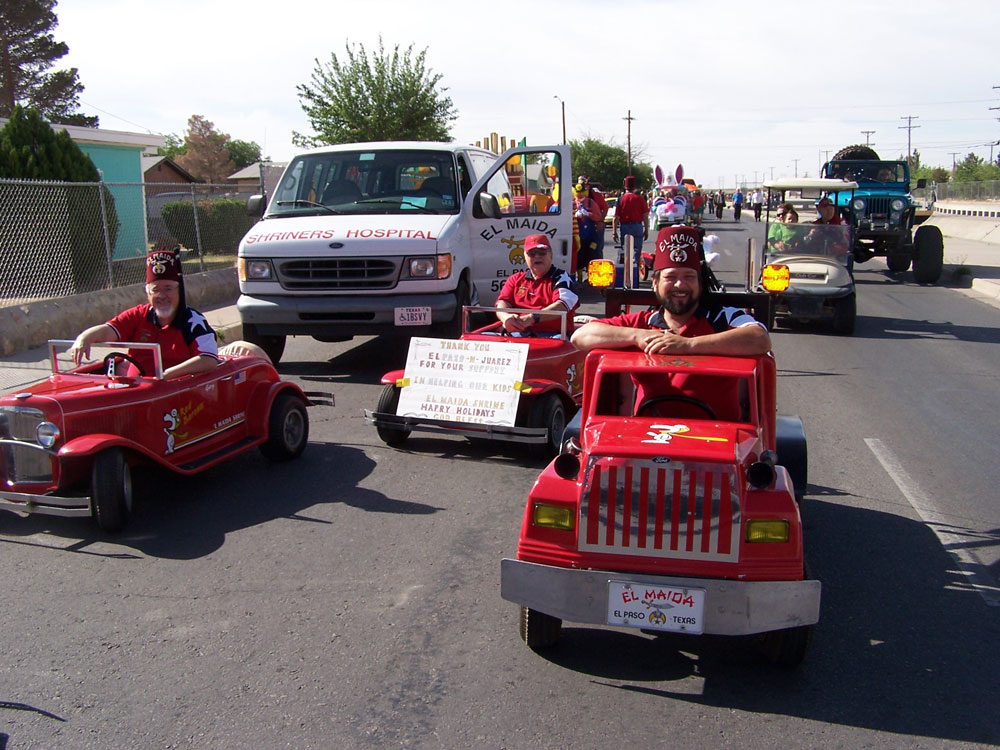 EL PASO – It’s a parade! Flashing headlights and light bars on vehicles, cheerleaders of all ages, people on horseback, floats, clowns, VIPS in vehicles and on floats. We’ve all seen them in parades as we stand on the sidelines with cameras as they pass by, but nothing compares to vantage point I got during the Northeaster Parade held on April 7th, 2012 in Northeast El Paso, where I was able to be in the parade for the first time. That was an experience beyond comparison. My morning started when I awoke a little after 7 a.m. after sleeping for about four hours, having gotten out of work a little after 2 a.m., and getting home and to sleep around 3 a.m. I may have slept only a few hours, but I felt energized and ready to go. Lady shriners in their golf cart ready for the parade. (Courtesy of Ron Smith)

Everything was already in motion when I arrived. The Lady Shriners where preparing their golf cart for the parade, the Calliope was uncovered and hitched to one of the El Maida Shrine’s passenger vans, and the Red Barons were double checking and loading their cars into the trailer that would move their cars to the unloading point near our starting point for the parade.

Multiple cars in a single trailer? Yes, you see, the Red Barons are the members of the El Maida Shrine who drive the little red cars that stand approximately two to three feet tall, but that was not what I was to drive.

Well there I was. We had driven down to the drop off point, offloaded all of the vehicles and were getting ready to drive to the staging area where we were to begin our journey along the parade route. I was nervous because I wanted to do a good job driving in the parade and hoping I wouldn’t mess up or have an accident. Plenty could go wrong. The tow truck uses a standard transmission, and I was used to driving an automatic. I’ve driven a standard before, but that was while in the military and I had gotten out 23 years ago.

Do you know a law referred to as Murphy’s?  Murphy’s Law, where if anything can go wrong it will. It did.

Sure enough, on the dash board staring right at me like a little silver tongue sticking out at me was the switch marked run/off in the off position. I flipped the switch, pulled on the rip cord and the engine starts. Talk about feeling like an idiot. So we’re off and running, but Murphy wasn’t finished with me yet.

We drive out of the parking lot and into the street and Murphy strikes again – the engine stalls. So I flip up the cab, get out of the tow truck, start the engine, get back in the tow truck and drive about another 10 feet when I stall out, again. This time, Daniel Bustamante, the Chief of the Knights of St. Andrew, another Masonic organization I belong to within the Scottish Rite, helps out and pulls the rip cord for me and I’m off.  I drive over to the staging area, park, and wait for the parade to start.

Then it happens, lights flashing, sirens wailing, bands playing, people marching and floats rolling. The parade had finally started. So we waited patiently until it was time for us to roll.

Finally, it was our turn. Kill switch in run position, engine starts, I get into the tow truck, put it into gear and Murphy strikes again. The tow truck doesn’t have a regular braking system; it uses a form of emergency brake where you need to push the brake handle forward to apply the brakes. Lesson learned, if you’re going to put a vehicle of this type into gear to drive, make sure the brake is off or you’re going to stall out.

Other lessons learned trying to get started and driving in the parade, take the vehicle out of gear when trying to start the engine, in a straight line stick shift if you’re going to shift to neutral to start the engine make sure you don’t go past neutral and place it in reverse. Oh yeah, Murphy had his way with me.  It would have probably also helped if I had done more than just one test drive of the tow truck before the parade. Finally!!! I was off and rolling down the middle of Diana in the Northeaster Parade. People are laughing, cheering and applauding as I start moving along the parade route.

As stated earlier, this was an experience beyond comparison. There is nothing more rewarding as when you’re driving along in a parade and hearing exclamations like; “How cute!”, “That’s cool!”, or “Look, Look, Look!”, and that was from the adults. The part of being in a parade that really makes it worthwhile are the looks on the faces of the children and the 80 and 90 year old senior citizens as you drive by and wave to them. Especially, when you make direct eye contact with the people watching the parade.

Why? Well, in my opinion anyway, when you make eye contact with someone watching the parade as it passes by, there is nothing as magical as knowing that at that moment the smile on your face and the wave of your hand has placed a smile on someone else’s face, as well as the creation of a special memory in their mind of when as they were watching a parade go by at least one person within the parade took the time to smile and wave just for them.

And so it went along the parade route smiling here, waving there and eye contact with this person and that, until just before reaching the end of the parade route when Murphy decided to make one final appearance. The tow truck stalled one final time, as if to see if I had remembered the lessons taught earlier. One pull of the rip cord and off I went to the end rally point.

My struggles at the beginning of the parade of course hadn’t gone unnoticed by other people associated with The El Maida Shrine, as during the after parade party up at the “hangar” with the smell of hamburgers and hot dogs in the air, one person commented,

“For a second there we thought we were going to need a tow truck for the tow truck.”

Was the clown laughing at me? (Robert Brown/Borderzine.com)

Lady shriners in their golf cart ready for the parade. (Courtesy of Ron Smith)

The after party. (Robert Brown/Borderzine.com)

One of many families that enjoyed the parade. (Robert Brown/Borderzine.com)