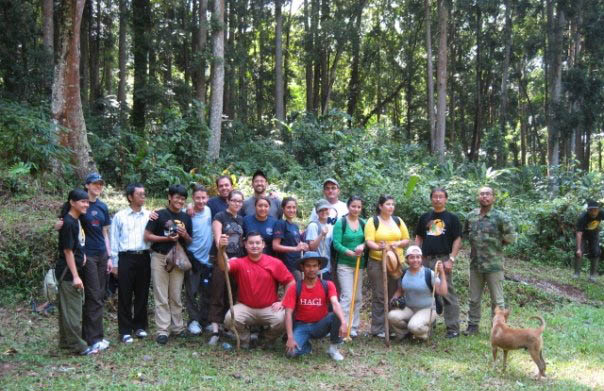 EL PASO – When Stacey Sowards’ parents moved to tropical East Kalimantan in Indonesia during her last year at Colorado College, little did she know that the new experience would guide her future academic achievements.

Sowards, an Associate Professor in the Department of Communication at the University of Texas at El Paso, first experienced Indonesia in 1994. It was not long before she started teaching Intercultural Communication at different locations in East Kalimantan.

She wrote her doctoral dissertation about environmental organizations working to protect orangutans in Indonesia. Sowards received a Fulbright scholarship in 2000 that allowed her to live in Indonesia for about a year and she has returned numerous times since then.

As a result of her extensive research in Indonesia, the U.S. Agency awarded her a $1 million grant for International Development. The grant focuses on the partnerships between the University of Texas at El Paso (UTEP), the University of Mulawarman and Rare, a non-profit conservation organization. In 2008 UTEP began partnering with Rare, as an environmental organization their primary goal is to determine the human behaviors that threaten the biodiversity.

According to Sowards’ colleague Sarah Ryan, the Master’s Program trains those who are already working in Environmental Conservation in Communication. The goal is to teach the people the proper behavior when dealing with the environment.

“The environmental conservation does not work if the citizens do not participate,” said Ryan. “We help to teach the people. It’s not okay to fish in March, because that’s when the fish are spawning.” Sowards, an Associate Professor in the Department of Communication at the University of Texas at El Paso, first experienced Indonesia in 1994. (Guerrero Garcia/Borderzine.com)

This program is taught in four locations right now – Indonesia, China, Mexico and the Philippines.

Because it is offered in Indonesia, it allowed Sowards to take more trips there, which eventually led to the partnership with the University of Mulawarman.

“UTEP has already established a relationship with Rare – now we are bringing in a new university,” said Sowards.

In the summer of 2010 Sowards took four students to Indonesia where one of their projects was to conduct a needs assessment. The findings led them to believe that the research could be broken down into five different teams.

“We based these five research teams on what the partners said that they needed,” said Sowards. “We interviewed faculty, we interviewed students and the needs emerged out of that process.”

The first team does capacity building. The team looks to strengthen the skills and abilities of the communities in Indonesia by supporting research, student-faculty exchange and interactive learning experiences for students there and students in UTEP.

According to Sowards there are five different colleges represented in this grant. There are professors from the Communication Department, Department of Biology in the College of Science, and from the Colleges of Education, Engineering and Health Sciences.

One of the goals of this interdisciplinary research is to disseminate the findings in academic publications, or through conferences and other outlets. According to Ryan some of the research coming out of Indonesia is not getting published.

“First of all, they write in Indonesian and the big academic journals here are in English,” said Ryan. This partnership will take everything that is already being done­ – it will build on it – and it will help get it published in reputable journals, she said.

The focus is to provide practical experience that makes a difference in communities. It will not only address a conservation problem, but will help support the community development that is beneficial to all.

The project will also provide the opportunity to do research in a place where most of the faculty has not. It will expose students to new ideas and expand their horizons. “It gets students involved in Academic Research and working with professors, and it builds a relationship with our Indonesian counterparts,” said Sowards.

Under the grant there is funding for student-faculty exchanges between both universities. This summer Sowards will once again travel to Indonesia with approximately 15 students and 12 professors.  In January, students and faculty from the University of Mulawarman will come to UTEP.

“It’s really an exciting opportunity to see another part of the world and learn about a tropical region where conservation is a huge and important problem,” said Sowards.