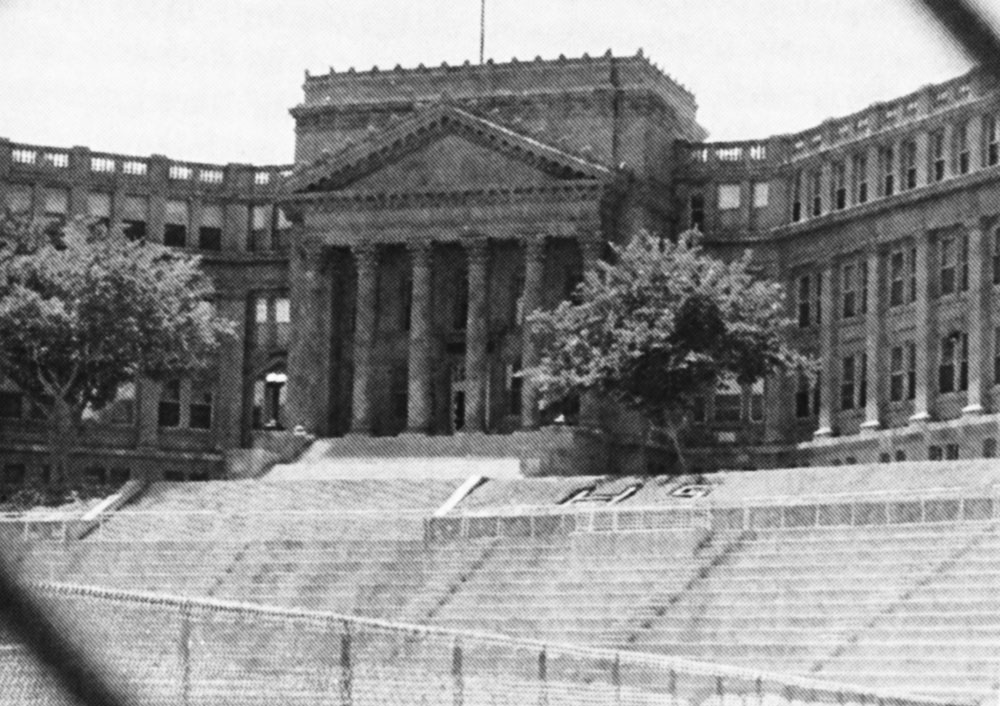 EL PASO – It’s dark and late, usually around 2 a.m. when the faint notes of the Tiger fight song begin to sound, then, more clearly, cheerleaders cheering and students laughing, and stamping feet cascading into a pep rally – in a locked empty auditorium.

You are hearing ghosts.

El Paso High located at 800 E. Schuster, opened for classes in 1916 and since then “Lady on the Hill” has graduated many prominent citizens, and has captured hundreds of trophies, plaques, and championships in all fields.

“Since the days of its construction, paranormal events have taken place at the school,” said Tovar. There have been numerous interior modifications designed to accommodate a growing student body and changing educational theories. As a result, a number of the original classrooms and hallways are no more, but there are stories that some of the modifications were done because of spirits that seem to have an affinity for certain areas of the building.

It is said that there is a hall that leads to a balcony that is also closed off.  People say they have seen an image of a girl jumping from the balcony. According to the story, every single day, mist and fog roam the abandoned hallway and there seems to be some “gooey-stuff” on the ceiling.

This unusual activity stems from an incident that happened nearly 35 years ago when a distraught teenage girl killed herself by slitting her wrists and then, throwing herself from a balcony at the end of the hallway. There were been enough sightings that a wall was built completely closing the stairway leading up to the haunted hallway.

However, this tragic young lady racing to her death is not the only unexplainable thing that has been seen at this historic school. Almost from the day it was constructed odd things have happened.

In the recent El Paso High School yearbook, there is a reproduction of an old photograph showing a young lady in a white dress watching the original construction of the building in 1916. However, this unknown woman was not in the original photograph. Who was she and most importantly, how did she get in the picture? 1986 Graduating class - The girl on white was not in the original negative but is in the developed photo. No one knows who she is. (From the El Paso High public pictures)

A trophy case just inside the original front entrance of this grand old school contains a photo of the 1985 graduating class. “Everyone else in the photo shows up clear and distinct, but there is one young lady whose features are faint and fuzzy. Her image looks like it was inserted after the photo was taken,” explained Tovar.

The figure in the picture is at the end of a row primarily of teachers. There are two young ladies, one toward the right end of the group and one on the left center of the group who are looking intently toward where this mysterious young lady is standing. Were these two young ladies perhaps the only ones sensitive enough to realize that something was wrong?

This mysterious girl was not part of that particular graduating class and no one in the class that was photographed admitted knowing the identity of the girl. But regardless of how she got into the picture, she is very clearly in the photograph, a lovely, lonely looking girl, smiling for the camera.

Tovar had a wealth of stories about events at the school. “About 15 years ago, it snowed in El Paso to the point that schools were closed. A few teachers and students had arrived before the closure announcement. Those teachers and students who had been able to make it to school were not allowed to leave due to unsafe road conditions. Having nothing else to do, a group of students and teachers, decided to explore the school starting with the tunnels in the basement,” he said.

At one point, several of the teachers crawled through a small opening eventually coming to a brick wall that blocked the tunnel. The bricks were old and the cement between them was crumbling, but it was clear that these bricks had been added long after the surrounding brickwork. Curious, one of the teachers pushed on the newer bricks until some gave way, revealing a large dark cavity. Pushing a flashlight through the hole, they discovered a sealed off classroom.

“This discovery surprised everyone as no one had even heard a whisper that there might be sealed off classrooms in the building,” said Tovar. The room was small and contained antique desks of the type seen in the television show Little House on the Prairie. There was no doubt that the classroom dated from the original construction of the building. The classroom was still set up with desks in place, texts and student notebooks still in place waiting for the students.

“There were Baby Ruth candy bar wrappers on the floor from a time this product sold for 5 cents as well as numerous 5-cent coke bottles. In one of the student notebooks lying on a desk, they found, in addition to algebra notes and completed problems, a very racy love letter from the owner of the book to a boy,” he explained.

There was a second sealed off classroom nearby, also ready to receive students, now filled with only dust and silence. Try as they might, they were never able to discover why, two classrooms would be sealed off so fast that they would not be cleaned of debris, desks nor texts nor the students be given time to claim their personal articles. The woman in the lower left hand corner was not in the original negative but is in the final photo. No one knows her identity. (From the El Paso High School public pictures.)

The vast basement has been used as an overflow morgue during several of our nation’s wars. During World War II there were so many casualties shipped here that bodies had been stored in the basement until the next of kin could be notified. During the Spanish Flu Epidemic in the early part of the 1900s, so many died that the bodies were also stored in the basement of the High School.

Just after they started practice, two waist-high access doors leading to the tunnels flew violently open, slamming back against the wall on either side. Naturally, the assumption eventually reached, even though there was little if any wind outside, was that a freak draft coming down one of the many chimneys had blown the latched doors open. The doors were shut and long heavy bench was placed in front of the doors to make sure that they would stay closed.

“The kids had gone back to their scrimmage game and they were all at the far end of the court. At about 7 p.m., the bench went flying across the court and the doors, that had been securely latched, again flew open violently,” Tovar related. Suffice it to say that this team, made up of gang members who didn’t fear the devil himself, led by a coach who, in his youth had led two tough barrio gangs, decided to leave the building without even taking the time to turn out the lights.

“A few years ago, Angelo Plecluda was the Journalism Instructor at El Paso High,” related Tovar. He and the yearbook staff, composed of journalism students, would work long into the night to produce a first class yearbook. One night he sent the last students home, and planned on being close behind them, but he had a few last minute things to do. It was almost exactly 11 p.m. when he finally left.

According to Tovar, when Plecluda turned toward the exit, standing in the pool of dim red light thrown by the exit sign was a young lady wearing a blue chiffon dress of the type that would be worn to the School Prom in the 1940s or 1950s. Thinking it was one of his students, asked her what she was doing there and told her to go home.

The girl turned and looked directly at him, her expression one of deep sadness. As he walked toward her, she began to become transparent and he noticed that she was not standing on the floor, but rather hovering in mid-air about a foot off of the floor. When he was only a few feet from her, she glided back into the deeper darkness of the hallway and disappeared.

“Danny McKillip was a former All-American and has been inducted into the UTEP Miner Hall of Fame for Track and Field,” began Tovar. He was also Track Coach for El Paso High. One night in the late 1970s or early 1980s, Coach McKillip and the El Paso Track Team returned to the school very late at night after a track meet in Austin. The Track Teams’ locker room was in the area beneath Tovar’s classroom. The students came into the building to drop off their track gear and pick up their possessions they had left in their lockers.

“The school was dark and silent when the buses arrived,” explained Tovar. As the students were gathering their possessions, McKillip suddenly heard the sounds of the Tiger Fight Song, cheerleaders performing their cheers and the sounds of a very spirited pep rally coming from the Second Floor Auditorium. Baffled, but thinking it might be a surprise reception for his Track Team that had just won the State Championship, Coach McKillip ran up the stairs to the second floor and, even though everything was dark, he dashed for the auditorium, a hundred feet away. Just as he reached the doors to the Auditorium, all of the sounds stopped. He found that the doors to the Auditorium were locked and he could no longer see nor hear anything.

Coach McKillip unlocked the Auditorium and entered. He found everything dark and quiet. There was no sign that anyone had been there recently. Puzzled, more than ever, he returned to the locker room where some of his students were still waiting for him. No sooner had he rejoined his students than once again they all heard the sounds of the Tiger Fight Song, cheerleaders leading cheers and voices screaming. Followed by most of the remaining students, Coach McKillip dashed back up the stairs toward the Auditorium. Once again, halfway to the door, all sounds stopped, the school was dark and silent as a tomb.

McKillip opened the Auditorium doors and he and his students searched the Auditorium for anything or anyone who could have made the sounds that they had heard. They found nothing. They returned to the locker room gathered their possessions and left the building.

The building is steeped in history but it hides its secrets well. Doing modifications to the auditorium, workers removed the steps leading to the stage and found hidden, one or two books per step, an entire set of a Catholic Encyclopedia hidden beneath the steps. This set of books is complete, lavishly illustrated and a real treasure. How did they get inside those steps? Who put them there and most importantly, why were they placed in such an unusual hiding place?