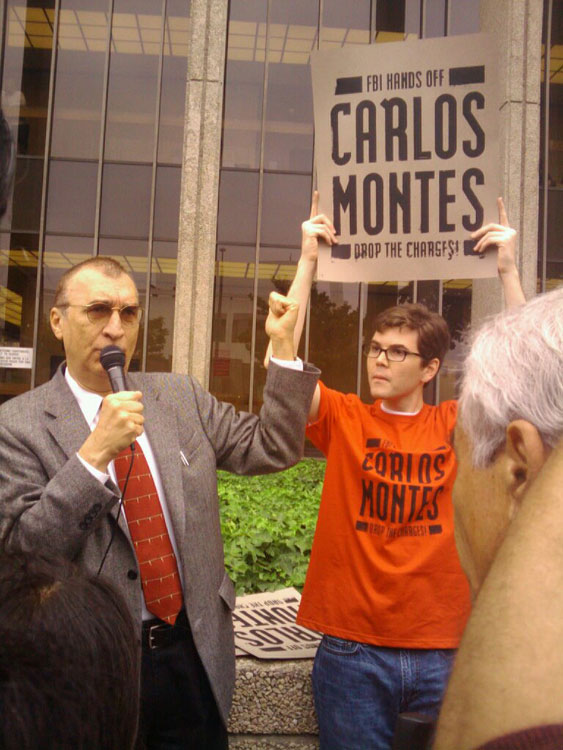 Carlos Montes after one of his court's hearings in L.A. (Courtesy of Julia Wallace.) Carlos Montes after one of his court's hearings in L.A. (Courtesy of Julia Wallace.)

EL PASO – El Paso born Carlos M. Montes has been a solidarity activist since the late 1960s, denouncing wars and fighting for immigration rights and better public education, but lately he can be seen surrounded by posters with a much different message –“Save Carlos Montes.”

Wearing his black newsboy cap backwards and a ‘Chicano Nation’ t-shirt, Montes, 64, walked with a swagger through El Paso’s Mayapan Mercado Mayachen museum, and in midsentence pointed to a picture on the gallery wall and said, “Oh shit, that’s me!” as if looking through a personal photo album that he’d forgotten existed.

The gallery documents the plight of Mexican immigrants as well as Montes’ own lifetime of struggle. The scattered protest posters scream out, “Alto Policía Represión,” “Don’t privatize public education!” and “Stop the war!”

In May 2011, police officers and the FBI raided Montes’ home in Los Angeles, he said, destroying everything in their path, confiscating papers, his computer and cell phone, dragging him out and throwing him into handcuffs.

He was charged with four counts of perjury for neglecting to mention a conviction that happened 42 years ago when he was purchasing a handgun. He was also charged with possession of a handgun and ammunition by an ex-felon.

The next court hearing is scheduled for March 27th and he is currently out on bail facing a possible prison sentence of 22 years. “The FBI is used as an instrument of repression,” Montes said. “They are after me because of my solidarity work.”

Montes has had his fair share of run-ins with the police. In 1968 he was charged with several misdemeanors after a walkout demanding better public education in L.A. high schools. In 1968 and 1969 he was arrested seven times and the FBI always kept a close watch on the Brown Berets, a Chicano activists organization partly created by Montes.

Montes’ only conviction – battery on a police officer after throwing a soda can at police lines during a demonstration at East L.A. College while demanding improved Chicano studies – would come back to haunt him. “The FBI are using that charge to keep me now while they wait to get me for something bigger,” Montes said.

That something bigger is terrorism. Montes has dipped his toes in several different activist organizations, including the Anti-war Committee and the Brown Berets, which has landed him on the FBI’s list of domestic terrorists. The FBI is currently investigating Montes and his affiliation with activist groups in America, Colombia and Palestine.

“Just because I denounce our government’s policies, I’m a terrorist? Give me a break,” Montes said. “Today, because I speak up, and I’m mad because of all the stuff I see, they are calling me a domestic terrorist and I have done nothing wrong.”

Some would argue that he has actually done a lot right. His organization of walkouts, marches and protests has brought more Chicano studies to East L.A. College and kept certain L.A. high schools from going private.

The FBI is paying no attention to Montes’ successes, while investigating his possible connection with the Fuerzas Armadas Revolucionarias de Colombia (the FARC in Colombia). Although Montes said he never met with anyone from the FARC, he has visited Colombia twice with his ex-girlfriend and had met with human rights activists there.

But even though the FBI is, as Montes says, “on his ass,” he refuses to retire from activism. “I am still as active as I was back then, fighting against wars, fighting for immigration reform, and education,” Montes said. “I’m under attack so I got to fight back.”

As antsy as ever, fighting back is what Montes all about. “When you ask me why am I an activist it’s like asking a person what makes them who they are,” Montes said.

“I am an activist because of what I experienced growing up as a young man in L.A. and in Juarez and El Paso. I experienced racism, police brutality, poor working conditions, overcrowded schools, and racist teachers and that made me an activist.”

Amanda Brinegar is currently a student at the University of Texas at El Paso, double majoring in Cultural Anthropology and Multimedia Journalism. Last year she participated in a bridge year program called Global Citizen Year. She lived in Senegal, West Africa for seven months, serving the community, working in education and public health. She won an international young reporters competition with the International Committee of the Red Cross and completed a project about the struggle faced by land mine victims. Amanda graduated from Franklin High School where she was editor-in-chief of her yearbook and features editor of her newspaper.