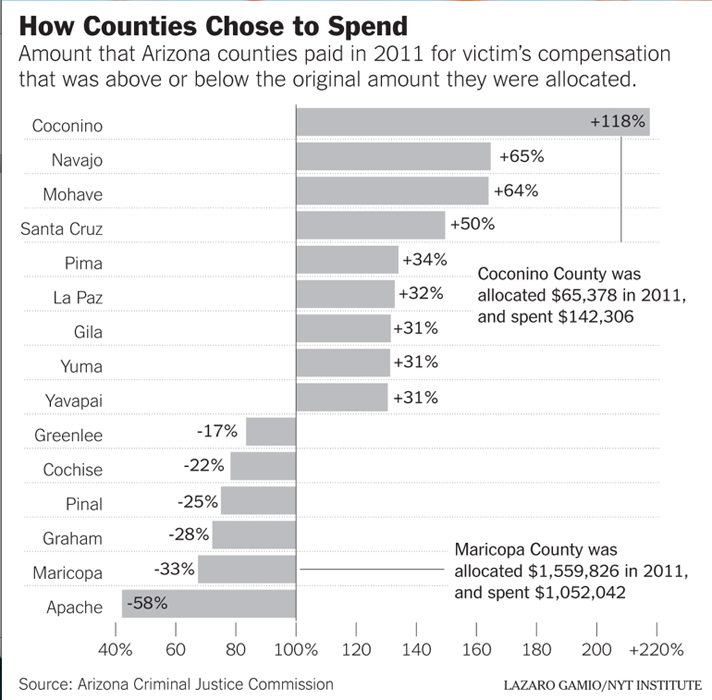 TUCSON, Ariz. – In Arizona, victims of violent crime have access to as much as $20,000 to help pay for funerals and other expenses. But officials and a report by Arizona State University assert that there’s a wide variation in how counties in the state disburse the money. “It’s not easy to get compensation,” Hart said. “Either people don’t know about the program or the rules are pretty strict.”

The report outlines a number of factors that have contributed to people’s difficulty in getting compensation, including a lack of awareness of the program and a decentralized system of operations.

Arizona and Colorado are the only two states in the country that have decentralized systems. In Arizona, each of the state’s 15 counties has its own board responsible for the distribution of monetary assistance to crime victims.

“It’s not easy to get compensation when rules are pretty strict and rule interpretation varies by county,” Hart said.

Arizona residents are eligible for compensation if they make a report to police within 72 hours of a crime. They may become ineligible if there is proof that they were involved in the crime itself or if they have outstanding county debts.

Critics say decentralized operations can lead to inconsistency in decisions and differences in rules’ interpretation.

“Sometimes board members’ opinions, where they live, culture and bias take part in whether they approve or deny a claim,” said Larry Grubbs, program manager of the Arizona Criminal Justice Commission Crime Victim Services. The commission collects and distributes the funds to each of the 15 counties based on population.

Counties that do not use the funds allotted to the program must return the money to the commission at the end of the year. The money is then redistributed to counties that may have fallen short in funds.

The maximum award for a single claim in Arizona remains among the lowest in the nation, at $20,000. States with some of the highest payments include California, Oregon and Ohio, whose residents are eligible for payments between $50,000 and $65,000.

Arizona receives about $1 million of the total $705 million approved annually by Congress. Federal funds, which come from fines paid by convicted offenders in federal prisons, constitute a third of the compensation budget. Arizona’s remaining two-thirds comes from unclaimed victims’ restitution fees paid by offenders in each county and state attorney general settlements.

According to the Arizona Criminal Justice Commission, many Arizona counties do not spend all the money budgeted for victims’ compensation. Among those is Cochise, a county with 140,263 residents in southern Arizona. In 2011, county officials returned $14,464 of the initial $60,000 they received from the commission.

On average, about 15 percent of applications in Cochise County are rejected before they’re reviewed by the board, for not meeting the initial requirements set forth by the county, said Meg Bokhari, coordinator of the Cochise Victims Compensation Program.

“I know right now we have a lot of money in our account to help people,” Bokhari said. “If they meet the criteria, they will be OK for payment.”

Program coordinators across the state agreed that many Arizona residents do not take advantage of the program because they do not know it is available to them.

In 2009, Santa Cruz, a county in southern Arizona with 47,900 people, began an aggressive outreach effort to increase awareness of the county’s victims’ compensation program.

“My team and I visited schools and hospitals,” said Inti Vasquez, director of Santa Cruz County Victim Services. “We respond on the scene, collect victims’ info and follow up with them to refer them to the program.”

In Apache, a county in northern Arizona with 76,668 residents, program coordinators encouraged local law enforcement agencies to spread the word about the program. As a result, the number of claims filed and payments increased, officials said.

“Those are counties that have recognized a need in the community,” Grubbs said.

The Arizona Criminal Justice Commission has scheduled a session to review the program’s guidelines this year. Officials plan to discuss considering crime rates and yearly payments on fund distribution.

“I believe it is the responsibility of ACJC to develop a formula that is able to effectively allocate to each county program the money they need,” Grubbs said.