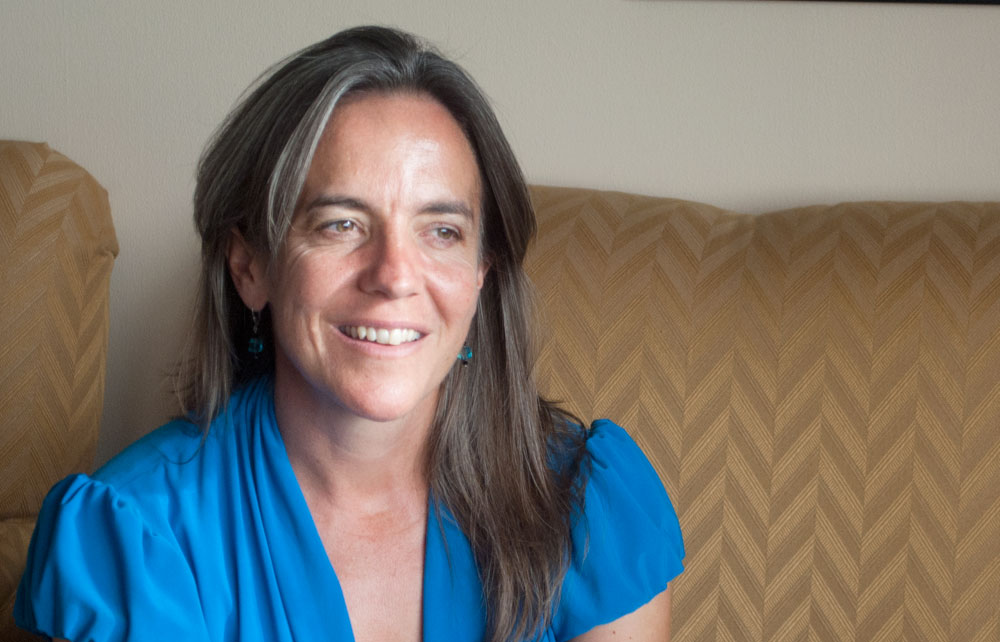 It's all about the community, believes Susy Byrd. (Alex Gandara/Borderzine.com) It's all about the community, believes Susie Byrd. (Alex Gandara/Borderzine.com)

Byrd stands by that vote, which sparked a recall effort against her, Mayor John Cooke and Representative Steve Ortega.  “This is less about me and more about my community. Our community has been tainted by religious leadership that seems very intent on tearing down our gay and lesbian community rather than building it.”

Byrd said that at stake is an issue of discrimination that the city needs to combat and something that the community has to repudiate for the rest of the world to see. “We are a very generous welcoming hopeful community and we embrace people of all backgrounds.”

She sees herself as a confident individual who above all cares about her community and says that her accomplishments are nothing more than her duty to the citizens she represents.

She says her strengths are getting into the weave of policies and projects, working through ideas and implementing them.

A mother of three married to Eddie Holland, a high school ESL teacher for the El Paso Independent School District, Byrd grew up in the central city. After attending Emory University in Atlanta, she returned to El Paso and worked as the director of Marketing and Publicity for her family’s company, Cinco Puntos Press, from 1995 to 2001.

In 2001 she was named Executive Assistant to Mayor Ray Caballero. In that position, she developed the El Paso Housing Finance Corporation’s First Time Homebuyer program, the mayor’s Incentives Taskforce and assisted with the Medical Center of the Americas, for Central El Paso. Byrd said the main barrier to overcome is within each woman. (Alex Gandara/Borderzine.com)

That job ended when Caballero was voted out of office in 2003. “Working for Mayor Caballero, I learned that it is easy to start a fire and get people worked up and fearful and hateful. It’s easy, but the most important work for the community is to do the hard work of building up neighborhoods, building hope and energy around good ideas.”

In 2003 she started her own company, Moxie Communications and Consulting. After two years she decided to run for city representative for Central El Paso. In 2005 she won the District 2 position and was re-elected in 2009.

Her strong stands on issues sometimes elicit strong challenges, but she says she has learned not to take everything personally. “You blow it off and I remember the job is not about me.  It’s about my community.”

Judy Gutierrez, her administrative assistant, says that working for Byrd can be like riding a rollercoaster.  “As far as policy, we’ve had really high highs like the downtown revitalization and the need to improve parks.” However the lows have been very low, she said, especially during the campaign season when Byrd ran for re-election.

“Things got really personal. It affected her and having to watch that from the sidelines was an eye opening experience.” Gutierrez said she witnessed many ugly personal attacks. “To see them, I can say those were the lowest lows I can think of.  When it gets personal and they go after your family that’s the part that you wish you weren’t around for.”

While remaining as objective as possible, Byrd said she does take some issues – like barriers to downtown renovation – personally. “Some people own very significant and important properties and are unwilling to invest in them in a way that is respectful to the community. I take that personally especially when there are people willing to invest and make sure those buildings don’t fall to the ground.

Listening to the community is essential to solve problems and clarify issues, she said.  At the very beginning of the redesign process of the Los Lagartos fountain in downtown El Paso’s San Jacinto Plaza, some people wanted to replace the sculpture built by Luis Jimenez, an El Paso public figure.

There was concern about the deterioration of the statue of Los Lagartos, which is exposed to the elements and it was important to be able to hear and respond to public concerns, she said. “The public arts people brought in a conservator who can help us keep the statue and keep it central to the story of the park.  The outcomes are good when you have the chance to hear from people.”

The downtown redevelopment plan also stirred up excitement, but not all the emotion came from the people of Segundo Barrio. “Beto O’Rourke and Veronica Escobar went door to door, and the concerns you were hearing from advocates were very different from the people in the neighborhood,” Byrd said. People love that neighborhood and believe there is a lot of important history and they don’t want it to deteriorate and decline, she said. Instead, they want the history and culture preserved, she said.

Byrd said there are few barriers for women in El Paso, although they are underrepresented in positions of leadership in business.  However, they are engaged in civic leadership in groups such as the Hispanic Chamber of Commerce, the greater Chamber and the El Paso del Norte group.

Women are especially strong agents of change in the public sector, she said.  City Council in the last six years has had a great representation of women along with the school boards, she said.

Speaking to a group of young women at the University of Texas at El Paso recently, Byrd said the main barrier to overcome is within each woman.  She said there is a need for more people willing to participate and if some are willing, enough people will support them.

Byrd finds inspiration in Mahatma Gandhi and Martin Luther King Jr., and especially in Mother Teresa’s ability to give beyond what she thought she was capable of.  “I’m a hard worker and people appreciate that about me in this community,” she said.

Editor’s note: This is another in a series of profiles of influential women in El Paso.

3 thoughts on “Rep. Susie Byrd believes in success through hard work and listening to the community”