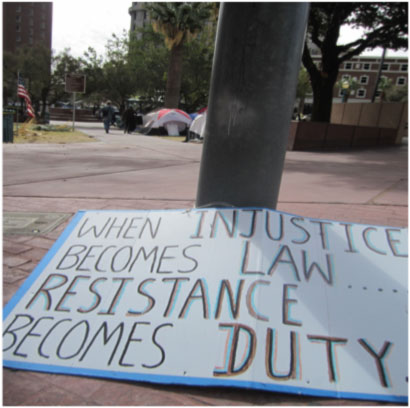 EL PASO – The cold morning breeze of October blurs the historical Plaza of San Jacinto where a handful of people occupy the plaza in an act of solidarity, adopting a cause originated by one national feeling: inconformity.

Occupy Together is undoubtedly the most important movement of the decade, spreading all across the country and some important cities around the world; and although Occupy El Paso is not as massive as in New York, or as aggressive as the Oakland (Cal.) movement, it is still a symbol that conveys the same message. For the past three weeks, San Jacinto plaza has witnessed how both workers and jobless rally against the unfair distribution of wealth in the U.S. From students drowning in a sea of debt to veterans from all the 20th and 21st century wars, the diversity of the crowd is vast.

“I’m here because I truly believe that we actually can do something,” said Claudia, an Iraq War veteran who encountered a jobless country after the war.

Like Claudia, I had experienced some of the same problems that started this movement; however, sincerely speaking I remain a little bit skeptical about the honesty of our petitions.

In my personal opinion this whole movement is ironic.

We fight against corporate greed, but isn’t our motivation also propelled by greed?

I have no doubt that protesters all around the country have convincing and accurate responses to this question to justify their actions, yet it is not enough to revolt against something if you yourself don’t have a solution. And even if you do have one, it must be thoroughly analyzed to be considered an option.

As I interviewed the San Jacinto protesters, the reasons why they joined the movement became clear.  But although the problems they described were palpable they lacked the facility to explain how they planned to achieve their goals.

Many offered Robin Hood solutions such as “tax the rich,” or… well, “tax the rich.”  Yet if it’s true that private companies “own” our government, it just seems to be a very utopian thought to think that our government immediately will start taxing “itself.” I mean, we all saw how the Congress destroyed Obama’s American Jobs Act.

Whether or not you are an Obama supporter, his plan closes corporate tax loopholes so that the wealthiest pay their fair share, just like this movement is trying to achieve; however, since the Senate has more than one hundred voices and interest, in the end they voted to keep their money.

In the best of cases, one candidate for the 2012’s elections can pick up this social inconformity and make promises of change to win votes. Nevertheless, history has taught us that campaign promises are easily forgotten.

Ironically enough, some protesters even dare to use a popular anti-government symbol of the Guy Fawkes’ masks, made famous by the 2006 film “V for Vendetta.” Besides clearly supporting capitalism by buying this mask, the movie slogan “People shouldn’t be afraid of their government, Government should be afraid of its people,” is not shown in the actions of the Occupy El Paso movement.

What is truly deplorable about Occupy El Paso is its meekness. Supposedly they are in “civil disobedience,” yet they are applying for permits and adjusting the city’s government schedule. Even one protester by the name of “Teddy”, said that he is terribly disappointed about this city’s movement by asking if  “we supposed to be showing the people’s power over its government?”

I think this kind of peaceful, obedient protest won’t scare our government and thus there will be no change at all.  To quote The Dreamers: “A revolution isn’t a gala dinner. It cannot be created like a book, a drawing or a tapestry. It cannot unfold with such elegance, tranquility and delicacy. Or such sweetness, affability. Courtesy, restraint and generosity. A revolution is an uprising, a violent act by which one class overthrows another.”

I agree with the whole nation when they claim that there is “something terribly wrong with this country,” yet as “V” (the masked character of the 2006 movie “V for Vendetta”) also said in his famous speech, “Truth be told, if you’re looking for the guilty, you need only look into a mirror.”

We are the ones who are making richer people with our own money, which ends up as bribes for politicians. Monopolies are fueled by our own greed.