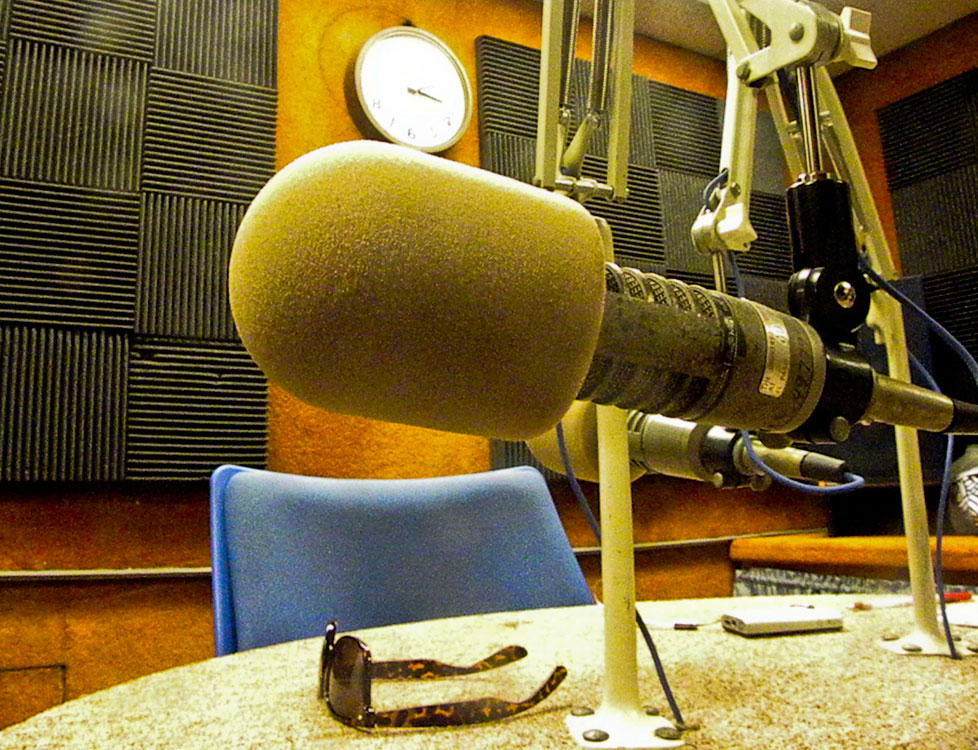 MNR was produced to revive an old tradition at KTEP, the student-run magazine. (Oscar Garza/Borderzine.com)

EL PASO – Before the computer, before the television, there was… the radio.

Individuals would sit around the radio and listen as the news, sport events and other entertainment were broadcast through the analog airwaves. The radio was an extremely popular medium that broke new ground long before television and the Internet.

“I can remember back in the 70’s, we would sit and listen to the radio a lot,” recalls Dennis Woo, Operations Director of KTEP, a non-commercial radio station broadcasting from the Communication Department at the University of Texas at El Paso. “Summer afternoons, cutting the lawn with my dad and we would listen to ball games, and all kinds of stuff, and so news magazines became like the norm in the 1970’s, and so we tried to teach that here at KTEP.”​

Woo explained that in the late 70’s KTEP was required curriculum for electronic media. Students would either create new programing or would get involved with established programming. In the middle part of the 1980’s KTEP became autonomous and it lost its curriculum status. Student-run magazine shows were no longer on the air.

Students on the air

This past May, a group of students resurrected the forgotten student-run magazine shows of the past, and created Miner News Radio (MNR), a news radio show that is run by students, who communicate current events on the borderland to the public, while enhancing their knowledge as professional radio broadcasters.

“The purpose of MNR is to teach the students; we want them to learn how to edit a show, how to interview and how to use the equipment,” said Sarah Duenas, MNR co-anchor, “that way students who want to go into radio have already produced, reported, hosted and have gained experience on how a radio station works”.

Sarah Duenas along with Ernie Chacon were the pioneers of Miner News Radio and guided the program to a successful first year. “In the beginning it was a whole lot easier, because we had someone showing us what to do,” said Sarah. “Then as we got more experience it got to the point where I was putting the show together.” MNR was produced to revive an old tradition at KTEP, the student-run magazine. (Oscar Garza/Borderzine.com)

Duenas and Chacon recruited students who aspire to be radio broadcasters. Most of the students involved with MNR are Multimedia Journalism majors. They hope their work in MNR can prepare them for their future careers as journalists.

During the first year of MNR the students were able to report on topics such as breast cancer awareness and the current events on campus. MNR has aired a total of 10 programs including a special Halloween Show in which they hosted the show using monster voices and reported on haunting themes. The MNR crew placed this episode as the highlight of their first year.

“Our Halloween show was something that KTEP was not used to,” said Chacon, “we weren’t sure if they were going to allow us to air it, but they enjoyed it so much that they are going to archive it.”

​The students describe the atmosphere at MNR as very relaxed and good natured but also funny and energetic. They meet on Wednesdays to brainstorm ideas on the structure of each months show.

“We get together and goof around,” said Duenas. “We believe through humor we can get to be serious.”

Producing an MNR show can be rewarding, but also highly stressful and very difficult. Duenas described her experience spending many hours editing the final show, sometimes staying up until three in the morning finishing up the edit.

“It’s difficult to edit a show because you have to cut it down to exactly 29 minutes, this last show I had it at 28.77, so I needed 33 milliseconds to fill, I kept going over then under the time limit. It was stressful.”

Duenas considers editing to be the hardest aspect of the show, but said that the whole process; from brainstorming on ideas, to inception, to the release of the show, is very rewarding.

MNR is still young, but thanks to its enthusiastic students, different array of topics and a successful first year, they entered the cultural mainstream of El Paso and the Borderland to inform the public. Duenas and Chacon hope that the program can evolve and become much bigger in its second year.

“Sarah and Ernie are the bridge between the old regime and the new regime of Miners News Radio,” said Woo, “and they have really put a lot of effort into trying to keep the momentum of the show going.”