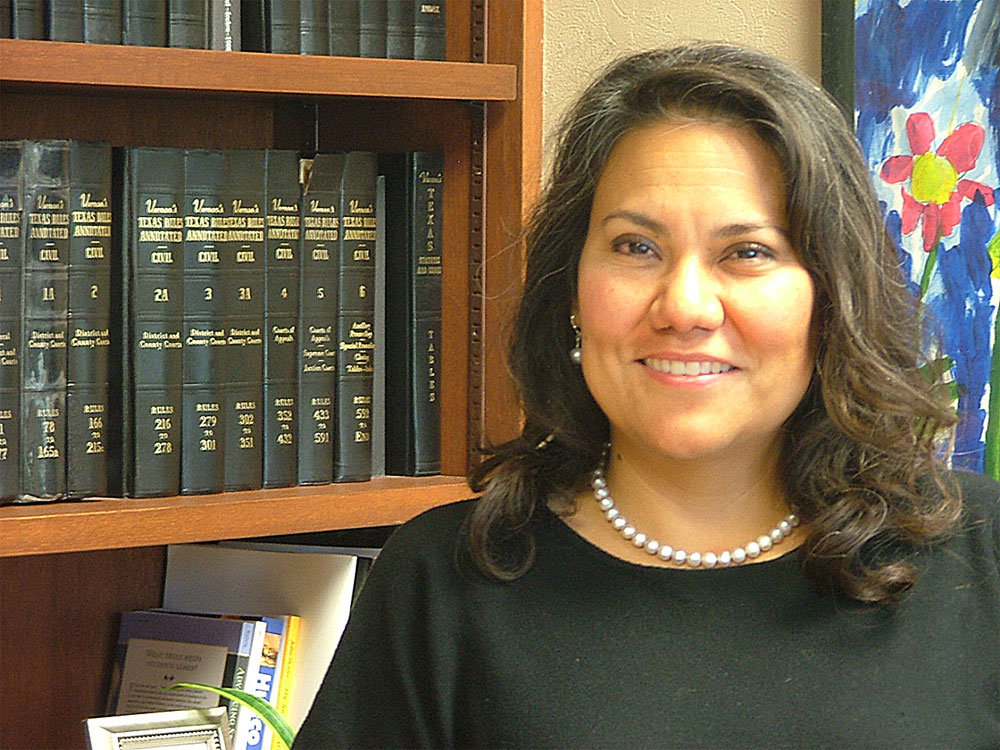 Judge Veronica Escobar says her mom – a strong woman, capable of juggling a lot and still being a committed loving wife and mother to her family – was a huge influence in her life. (Kristopher Rivera/Borderzine.com)

EL PASO – When she was running for the position of El Paso County judge Veronica Escobar listed her top three accomplishments in public service this way: lowering the cost of government, protecting the taxpayer and improving access to health care.

In a recent interview, she cited her interest in the redevelopment of downtown El Paso as an example of her dedication to economic growth. “The downtown renovation project isn’t happening fast enough. I am a huge supporter.”

Escobar said she wants to see downtown renovation bring El Paso back to the thriving city it was in the 1950’s until bad leadership brought it down in the 70’s, 80’s and 90’s. To her, downtown renovation means two things – the recreation of a wonderful community and the encouragement of economic activity. “In the 1970’s and 1980’s downtown went into decline. My parents used to talk about how wonderful it was, with streetcars that would go through the community and lots of activity,” she said.

Large buildings dropped in value, she said, and even the worth of the more valuable tall buildings also declined, lowering the tax base. Instead of taxing homeowners, downtown renovation would contribute more to the tax base, which means more money to fund parks, museums, streetlights, streets and libraries, she said.

In cities with a healthy tax base, downtown and commercial properties shoulder 60 percent to 70 percent of the tax burden, with some 30 percent paid by homeowners. “In El Paso it’s reversed.  Downtown is a miniscule fraction,” she said.

Downtown blight places an economic cost on everyone in the area, Escobar said. Economic vitality is what funds community service, especially in poor communities, it is important, she said.  With downtown renovation, El Paso will bloom into a striving city eventually, but it’s up to the community to do it, Escobar said.

“We have an incredibly ambitious council that for the first time is investing in mass transit, thinking about light rail, downtown revitalization, reinvesting in us, and you have the haters trying to tear down good people and get them out of office. This sends a negative message to our community, that we are not interested in progress.”

A recall effort against Representatives Susie Byrd, Steve Ortega and Mayor John Cooke, worries her, she said. Last June, four El Paso City Council members voted to restore health care benefits to gay and unmarried partners of city employees, reversing an initiative approved by voters last year. That vote, sparked the recall, which Escobar sees as a huge test of where the lines of progress are drawn.

Escobar says her mom – a strong woman, capable of juggling a lot and still being a committed loving wife and mother to her family – was a huge influence in her life. Escobar went on to graduate from the University of Texas at El Paso, with a Bachelor of Arts degree in 1991 and then earned a Master of Arts degree at New York University in 1993.

Escobar has been involved in the Border network for Human Rights for the past 20 years and many other community organizations including the Hispanic Leadership Institute, Las Americas Immigrant Advocacy Center, the Border Rights Coalition, El Paso Now!, the Women’s Political Action Committee of El Paso, and the Community Scholars.

In 2001 to 2003 she was the communications director for Mayor Ray Caballero and then Precinct 2 county commissioner form 2006-2010.

El Paso Representative Susie Byrd, who worked with Escobar from 2001-2003 during the Caballero administration, said that Escobar mobilizes around hope and excitement for her community. “The test of a woman with really good strong leadership would be Judge Escobar, who is able to over time sustain real change because she pulls people in,” Byrd said.

Elections next year will make a huge difference in El Paso, Escobar said. “There’s a lot at stake right now and it’s important to vote – elections matter and the votes are important. If anyone in the community is not interested in progress, maybe they should run for office, and not discourage the ones that do.”

Editor’s note: This is another in a series of profiles of influential women in El Paso.