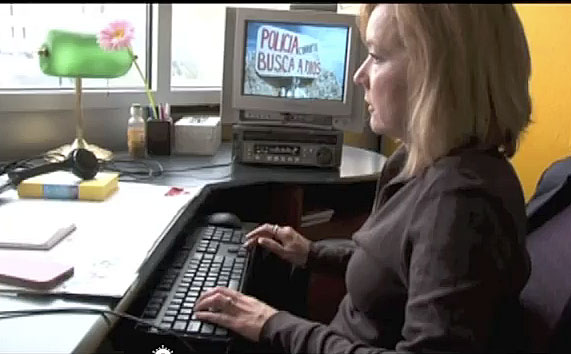 EL PASO – TV reporters covering the U.S.-Mexico border require passion, strong investigative skills and survival skills on a beat that has claimed thousands of lives in a ruthless drug war.

Angela Kocherga and her cameraman Hugo Perez, who have covered the violent border for the Belo Border Bureau for the past six years, won the 9th Annual Lone Star Emmy Awards Crime-News Single Story category for their story on Juárez paramedics.

Working for the Belo Corporation, one of the largest television companies in the nation, which operates 20 television stations, the Kocherga-Perez team covers stories on drug war violence, immigration and cross border health issues and how all this affects people on both sides of the border. Their featured stories are aired in various stations throughout Texas. The award-winning story revealed the everyday risks the paramedics of Ciudad Juárez face while trying to save lives. Both men and women in the Red Cross have had people chase them and pull patients out of the ambulance to kill them.

“I like to share those stories that often go untold, to talk to people who are out,” Kocherga said. “Especially in Juárez right now there is a lot of violence, a lot of crime, but to see the people out in the field who are still doing heroic things in spite of all the horror you know the families helping each other or the parents who have lost a loved one or a child who are helping other families.”

They have travelled to Juárez many times since the violence worsened in 2007, Perez said, “We’ve gone into Reynosa, which is a very dangerous place. We were there to shoot a story and were mostly finished when someone told us ‘saben que no deben de estar aquí como reporteros.’” Pérez said they slowly gathered their equipment then made their way back to the bridge and across to the U.S. side.

“We know when we are monitored like in Nuevo Laredo. As soon as we cross to the Mexican side they have their hawks monitoring us with their two ways telling their other people that there is media coming in and they’ll watch us,” Perez said.

At the recent awards ceremony in Houston, they also received the On Camera Talent, Specialty Assignment award for their story Drug War, on the impact of violence on both sides of the border.

“As U.S. journalists, what we do pales in comparison to what our Mexican colleagues do day-in and day-out, especially our colleagues who are living in some of these very dangerous areas where they’ve really had to self-censor. They aren’t able to tell these stories because they would be killed, or kidnapped,” said Kocherga.

“They’ve disappeared journalists, and photographers so Hugo and I feel a greater sense of responsibility because we do have the freedom to go back and forth to get over there and tell those stories and bring them to viewers to this side of the border as well,” she said.