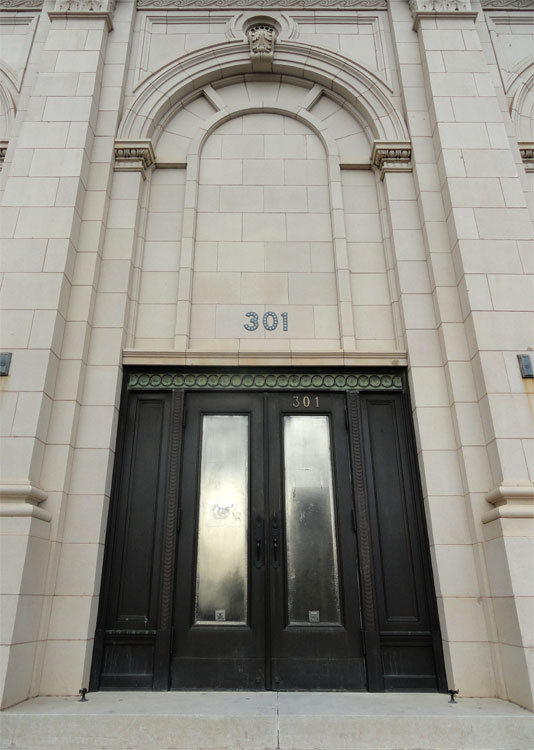 The Ancient and Accepted Scottish Rite of Freemasonry is located at 301 W. Missouri Ave. (Christine Villegas/Borderzine.com)

EL PASO – Most people go to only a few funerals in their lifetime, so it is hard to imagine going to hundreds, but Norman Miller says he has performed 1,000 Masonic funeral services.

The 93-year-old Freemason has been conducting funeral services for the Freemasons for 48 years.

“The military and Masonry have been my life,” Miller said proudly as he sat just feet away from a chapel-like room where Masonic paraphernalia is displayed in the Scottish Rite building in downtown El Paso.

“I came in to the Masons in 1958… In December of 1963, I did my first Masonic funeral on an old gentleman, Mr. Pandelities.” Freemasons refer to the funeral ceremony they conduct as an orientation. The ceremony itself is very similar to non-denomination funeral services in large part because of the Freemason’s ambiguous belief in a supreme being. Miller is the Master of the ceremony, the person who speaks at the service, much like a priest would at a funeral.

The memory of the men he has helped commemorate obviously weighs heavily on Miller, but he takes it all in stride. “And I have continued and continued up to this time. I never kept track of how many, but I know it is over a thousand,” Miller smiles.

He pointed out that this is not a job for the faint-hearted. “We never know when we will get a call. The last funeral lasted six to eight hours. I had to get everybody together.” This means he had to find six other available members and make sure all the materials for the ceremony where ready. “We made it to the funeral,” he said proudly.

Miller explained the process this way: “We get word from the families or the funeral director that the family desires to have a Masonic gravesite service. We don our Masonic aprons, our paraphernalia… some of the lodge officers (have) their jewels on.  We form the group and I do the Masonic orientation.” The Ancient and Accepted Scottish Rite of Freemasonry is located at 301 W. Missouri Ave. (Christine Villegas/Borderzine.com)

The Freemasons is a fraternity that has a long and sometimes mysterious history that stretches back to the 16th century and across the Atlantic Ocean to the British Isles. This has earned them the reputation of being a secret society.

In recent years the Masons have grown into a fraternity that is more open and focused on charitable works. Their history, however, still has a strong presence in their culture. One of the places where this is strongly felt is in their funeral traditions, where a special service for a deceased Mason is performed by other fellow Masons. The ceremony is riddled with symbolism only understood by Masons.

“Most of the services I’ve done have been at Fort Bliss National Cemetery for members of the Masonic order that have been military in the past.” There is no Freemason rule that states you must have served to be a Mason but almost all Masons have a military background.

Ironically, this spirited senior Mason credits his long life to his funeral work with the Freemasons. “I think that I owe my longevity to just staying active all my life.“

Despite all the death in his work or maybe because of it, Miller has a positive outlook on life, “All I can say is that it has been a beautiful life.“