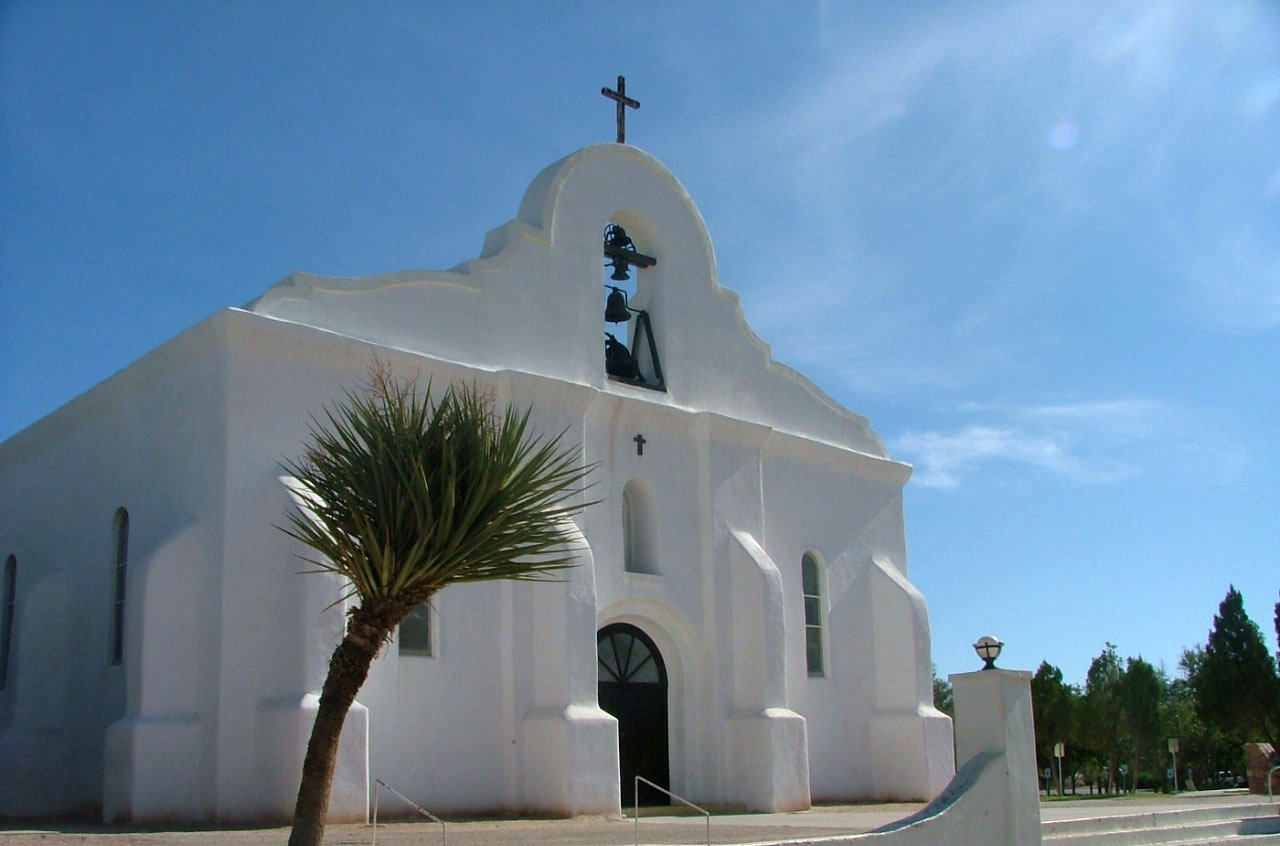 SAN ELIZARIO, TX – A chapel dedicated to San Elizario has stood on this spot  since the days the conquistadores wound their way north on the old imperial Spanish mission trail along the Rio Grande, but the current church built in 1877 is falling apart.

Extensive repairs have maintained the exterior of the church, but the crumbling interior looks like it has been damaged by a violent exorcism. The walls have been battered by storms that weakened the adobe and created numerous pits and cracks.

Lillian Trujillo, a tour guide for the church who has deep family roots in San Elizario still sees beauty in the existing structure. “Even though it’s damaged you can see that it’s a beautiful church. Of the three it’s the biggest, and to me it’s the prettiest church,” Trujillo said. “It has a lot of historic value, it dates back to Juan De Oñate.  A a lot of people have memories here.  My family spans to the 1790s in this little town and this church.” The adobe construction has numerous pits and cracks. (Kristopher Rivera/Borderzine.com)

Several community leaders have tried to deal with the problem by shuffling solutions to help restore the church to its former glory. Jorge Vergen, executive director of Catholic Properties of El Paso said they are trying to raise funds to repair the church.

“The main thing is to do the interior. The outside is already done. We stabilized the church as much as we could,” he said. “The problem with those church is there’s no footing, – its just adobe on the ground. “

This lack of a foundation is the main source of the structure’s problem. The church invested $200,000 in renovations that can be clearly visible on the outside, but acquiring a second grant to restore the interior is proving difficult. The renovations and repairs are estimated to cost another $200,000, but with a huge existing debt it won’t be possible for the church to receive a second grant or borrow new money.

The church got some funds from the sale of land and fiestas are held at the church every year, but they don’t provide enough resources to deal with the reconstruction.

The Catholic diocese provided a grant and a loan. Now the San Elizario Chapel has accumulated a debt of $107,000.  “We’re hoping that they’ll take a bigger role in this because this is a very poor parish,” Trujillo said. “We were getting $1,200 a week, which sounds a lot, but it’s only $4,800 a month and our bills are close to $8,000 a month so it doesn’t even cover the bills.”

But on the other side of the issue, the Diocese believes the community must put in a greater effort. “The church belongs to the community. I really think the community should be more involved,” Vergen said. “The other churches can do it  – the best example is the Ysleta mission.”

Vergen says that if these churches were owned by the state then financing for restorations would not be a problem. However, the downside to that option would be the end of the structure as a living church.  The mission would not longer be in religious service, unable to provide Sunday Mass.

Because of existing debt and lack of savings the survival of the church appears to rest entirely on the ability of the community to raise the necessary funds through other means.

The walls have been battered by storms that weakened the adobe. (Kristopher Rivera/Borderzine.com)

The adobe construction has numerous pits and cracks. (Kristopher Rivera/Borderzine.com)

One thought on “Crumbling from the inside out, a Mission Trail chapel prays for support”