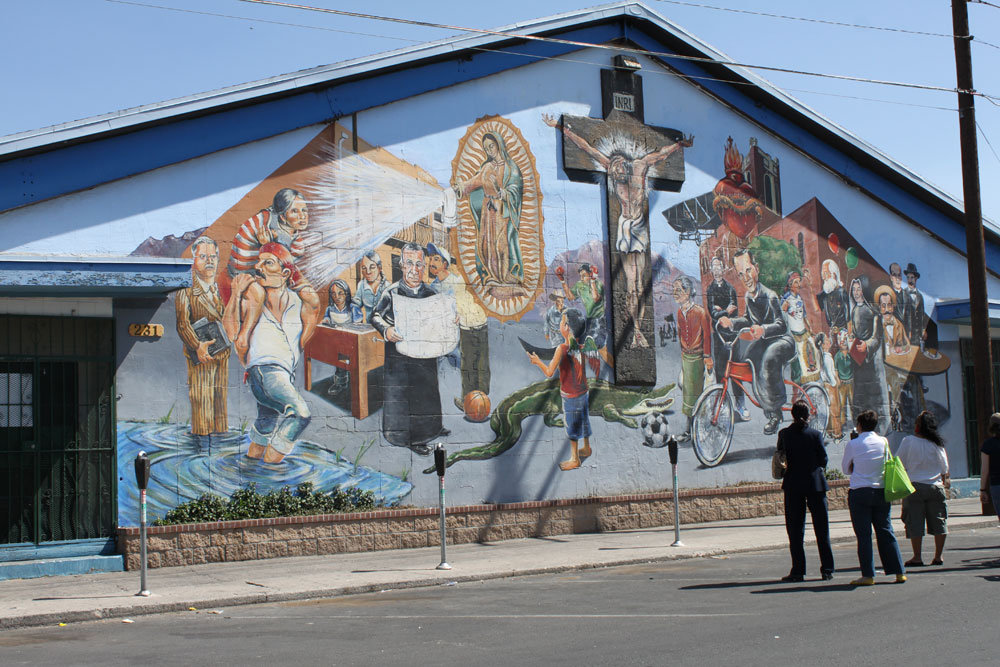 A mural with the most important character of Segundo Barrio can be found at E. Father Rahm Ave. (Azenett Cornejo/Borderzine.com)

EL PASO — In the heart of El Paso is Segundo Barrio, a port of entry to the United States. It’s the first community people see when they cross the border from Juarez, Mexico.

Located on the city’s south side, Segundo Barrio is home to more than 8,000 people, of whom 50.8 percent are U.S. citizens, 13.7 percent are naturalized citizens and 35.5 percent are non-citizens, according to City of El Paso statistics.

Yolanda Chávez Leyva, chair of the University of Texas at El Paso history department, calls Segundo Barrio the “heart of the Mexican diaspora.” A mural with the most important character of Segundo Barrio can be found at E. Father Rahm Ave. (Azenett Cornejo/Borderzine.com)

Segundo Barrio has always been an immigrant and impoverished community.

“For many years, it was the lowest-income ZIP code in the U.S.,” Chávez Leyva said.

The professor’s family lived in Segundo Barrio after leaving Mexico in the 1920s.

“I grew up, just like hundreds of other people in El Paso, always visiting El Segundo,” she said.

After studying the community for many years, Chávez Leyva and colleagues founded Museo Urbano in May 2011 to share the neighborhood’s history with the younger generation.

Museo Urbano, located at 500 S. Oregon St., pays tribute to Segundo Barrio’s most influential residents. Visitors to this museum learn about the people who came to the community centuries ago, and about those who helped shape its history.

Among the best-known residents of Segundo Barrio is Teresa Urrea (1873-1906), a “legendary healer” and journalist who “helped early revolutionary movements against the Mexican dictator Porfirio Diaz,” reads a plaque outside the museum.

Diaz called her the “most dangerous girl in Mexico,” Chávez Leyva said.

From the plaque, one learns that Urrea lived in Segundo Barrio from 1896 to 1897. Thousands of people came to her home for healing, and she treated the poor free of charge.

Among those coming to the neighborhood now are migrant farmworkers who gather outside the Centro de los Trabajadores Agrícolas Fronterizos looking for work.

About 5,000 farmworkers work in the El Paso area, but work is scarce these days because of the drought.

The center, located at Ninth Avenue and Oregon Street, provides food and shelter to about 100 farmworkers a day, said its director, Carlos Marentes.

“These days, we provide emergency assistance because there is no agricultural activity,” Marentes said. “If the center is not here, the farmworkers would be back [living on] the streets, as it was before the building of the center.” Asked what challenges Segundo Barrio faces now, Chávez Leyva replied they are the same as in the past.

“People there are paid very low wages, there’s high unemployment and there’s a lack of job training,” she said.

Chávez Leyva said in order to fix Segundo Barrio’s problems, El Paso’s leaders should ask its residents what they need.

The city’s revitalization plan calls for the demolition of many of the neighborhood’s historic buildings, including the one that houses Museo Urbano.

“If that area, which is the heart of Segundo Barrio, were to be demolished, the Museo would go with it,” Chávez Leyva said.

Carliene Quist, a teacher at El Paso’s La Fe preparatory school who also visited the museum recently, said she has a newfound appreciation for the “living history” that exists within the buildings of Segundo Barrio.

“I would challenge why redevelopment needs to include the destruction of so much history,” Quist said. “… Are there ways that we could respect the integrity of this area while we modernize for 21st century businesses?”

Chávez Leyva is concerned about Segundo Barrio’s future and hopes people realize the importance of the area and the need to preserve it.

“Our hope is to really demonstrate to the city and the people of the United States the historic value of Segundo Barrio and the contemporary value of that community. [Its residents] are so hardworking and resilient in the face of such huge challenges,” she said.

(Click on the image below to watch a slideshow.)

Cornejo was hired as the coordinator of student publications at the University of Texas at Brownsville in August 1997. At the time, the department produced a biweekly newspaper. She expanded the department's offerings to a weekly print and online newspaper. a weekly webcast and in 2009, an internet-based student radio station. Cornejo was promoted to director of student media in 2009. During her tenure, the department's student staff has won 194 awards from the Texas Intercollegiate Press Association