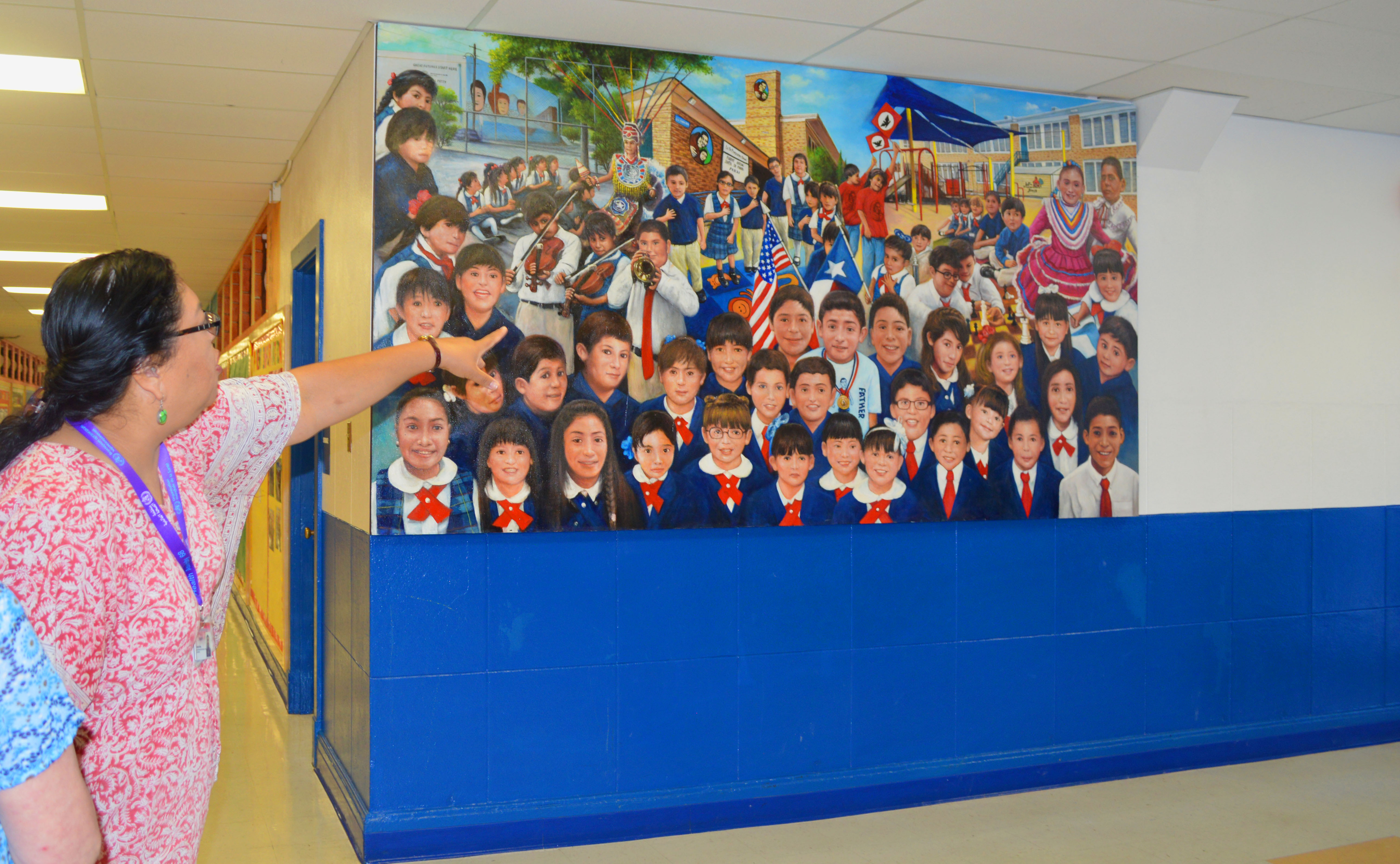 EL PASO — The future of Segundo Barrio is not white or brown, but green. Such is the view of Centro de Salud Familiar La Fe, a health and human services organization that contends economic power will decide the fate of this historic neighborhood in south central El Paso.

It is a decidedly pragmatic approach for a non-profit born in the grassroots movements of the 1960’s and grounded in social justice.

A visit to the La Fe “campus” reveals an organization that appears to be thriving. In 1992, La Fe consisted of one health clinic, 65 employees and a budget of $3 million, mostly federal funds. Today, La Fe has 22 sites, 400 staff members and a budget of $23 million, 25 percent of which is federal money.

The La Fe network includes health clinics throughout El Paso, a preparatory school, a technology center, and a research and policy center in San Antonio.

The organization’s expansion reflects its holistic philosophy to health care, which it describes as Totalidad de Nuestro Bienestar. Total wellness, they say, can only be achieved hand-in-hand with better education, employment and housing. “It’s all one circle of health,” says La Fe spokesperson Estela Reyes. “Health care is not just the physical.” Figures from the 2000 census show 64 percent of residents living in poverty. (city-data.com)

At the same time La Fe is “a hand-up from poverty, not a hand-out,” say staff. “CEO Salvador Balcorta emphasized from the start that we were to run the non-profit like a corporation and strive for self-sufficiency,” says La Fe’s Chief Operating Officer Robert Gonzales.

Yet, all of this growth has not come without growing pains, with some critics questioning whether a grassroots organization can retain its mission to the people as it expands.

La Fe’s campus covers several blocks of Segundo Barrio, a neighborhood steeped in history. Segundo Barrio has played an important role in many political and social movements, from the Mexican Revolution to the Movimiento Chicano of the 1960s.

One night in the late 1960s, a five-year-old girl fell down the stairs of her apartment building in the notorious Seis Infiernos (Six Hells), a slum underserved by city public health services. She bled to death before the ambulance arrived. Her death served as a rallying call for women in the community to form their own health care clinic. That one-room tenement clinic grew over the years, evolving into Centro de Salud Familiar La Fe, or Faith Family Health Center.

Today, the La Fe clinics serve thousands of patients a year. In a community where the median family income is around $12,000, the clinics serve some of the city — and the nation’s — poorest residents. Diabetes and hypertension top the list of ailments, along with obesity-related complications.

The clinics are open to all, Reyes says. This may at times include the undocumented. “Disease does not carry a passport,” she says. “When we are talking about the health of this community, we realize that we truly mean not just the community north of the Rio Grande. What affects Juarez affects us.”

COO Robert Gonzales concurs. “Our children play with their children. We want them all to get vaccinated.” Recent anti-immigrant sentiment has impacted the community, says Gonzales, with fewer parents bringing the children in for medical care. “The kids are U.S. citizens, but the parents may not be and they will hold back because they are afraid.”

The La Fe pharmacy serves anyone who walks through the door, says Albert Lucero, pharmacist. Clinic patients pay only $7 for any medication, regardless of whether it costs La Fe a penny or $100, he says.

Changing lifestyles — notably lack of exercise and health education — is as important as the medication he dispenses, says Lucero. La Fe has several programs directed at preventing many of the community’s ailments. Zumba, a mix of merengue, cha-cha-cha and aerobics, offers community women a way to de-stress. “Many women here have physical or stress-related concerns due to their spouses, hypertension, or papeles,” says Zumba instructor Marisol Galan. “This is an hour just for them. I see changes in their faces after class. They are more relaxed and content.”

The Women’s Health and Family Planning Center offer low-cost gynecological care. The center name may soon be changing, says Reyes, to encourage more men to come to the clinic.

It is essential to reach out to husbands and boyfriends, says Reyes, and to overcome some of the shame some Latina women feel about seeking reproductive health care.

“Right now Latinas are among the fastest rising new HIV/AIDS infection groups,” says Reyes. “Our women culturally, historically, have been in environments where they are taught to be submissive, where they are taught and expected not to question their husbands about their sexual histories, while they themselves are expected to have none.” Reyes adds that there is also a growing elderly population who are contracting the virus. “We are seeing patients in the 80s,” she says. Contraceptives were traditionally used for birth control, she says. As a result, many people in their late 50s or 60s are less vigilant about condom use, she says. “That can be a dangerous thing in a border town where prostitution is available right across the border.”

La Fe CARE Center-HIV/AIDS is treating about 1,500 “official” patients, diagnosed as HIV positive or full-blown AIDS, says Reyes, but the true number in the region is probably much higher. Recent closure of Planned Parenthood of El Paso left La Fe to pick up the patients served by that clinic. Now the center is the only public health HIV education and treatment center in the entire El Paso southwest region, she says.

Dental care is often a luxury low income residents must forego to pay more pressing expenses. Neglect and lack of education are the biggest causes of tooth decay in the population, says senior dental assistant Martha “Marty” Martinez. “We see the dental IQ among our patients is very low,” says Martinez. “A lot of them have never been to the dentist or have phobias about the dentist. We see a lot of children with bottle decay where parents might put Coca-Cola or Kool-Aid in bottles because they don’t realize it is unhealthy.” At the La Fe dental clinic, patients need only pay $30, whether they are getting a filling, an extraction or a root canal, she says.

An Emphasis on Education Talking to second-graders at La Fe Preparatory School, it quickly becomes clear that these students have big plans. Asking students what they want to be when they grow up results in answers like “I’d like to be a doctor” and “I want to be a veterinarian.” There is an expectation that students are both capable of attending and will attend college, something many of their parents were not able to do. Census figures show that almost 80 percent of Segundo Barrio residents did not finish high school.

The school currently serves students in pre-K through 4th grade and La Fe hopes to add middle and high schools. Classes are truly bilingual, with students alternating between English and Spanish teachers. Students are in class from nine until five, giving parents childcare relief. Students are also, says Reyes, some of the best-dressed niños in the barrio.

Reyes adds, “I love it every year when we march our kids around the neighborhood for Cesar Chavez Day, and they’re out there screaming and chanting ‘Si se puede!’ with their little fists in the air. People say to me, ‘Estela, you guys are creating, what, a little leftist militant army?’ That’s right.” Walls of the school are lined with student work in both Spanish and English. All La Fe students learn about their community heroes, who they were and why they are still relevant, says instructor Miguel Cervantes. They also learn that the struggle for civil rights and recognition is ongoing, he says, like the recent debate over whether to eliminate Cesar Chavez Day.

“There is not a doubt in the mind of the people who live in Segundo Barrio that Cesar Chavez Day is an important holiday,” says Cervantes. “It is essential to remember who Chavez was and what he did so that the union that he established can continue to provide human rights to the people that need them.” The La Fe technology center serves both young and old members of the community, says staff member Victor Rodriguez. One elderly mother used the center to communicate with her son in Iraq. Another resident used it to sell Avon products, he says.

Older residents who did not get their high school diploma can study in La Fe’s GED program, run by Humberto Romero, who proudly points to all the diplomas on the wall earned by his students. He says he focuses on math because that’s where students seem to have the most trouble.

“What did people say to you when you told them you were coming to Segundo Barrio?” Reyes asks a visiting group of students from UTEP. “Be careful? Lock your car? There are gang members everywhere?”

At one time there was a saying in the neighborhood, “Sal si puede,” or “Escape if you can,” says Reyes. That is no longer the case. Residents take enormous pride in their barrio and look out for their neighbors. In Segundo Barrio, says Reyes, you are much more likely to be greeted by a neighbor who inquires after your mother, or warns you that your dog is loose, than you are to be mugged or carjacked.

And more change is coming. In addition to its social services, La Fe has been involved in construction of new housing in the neighborhood, which is part of a larger plan to develop El Paso’s downtown area. Magoffin Park Villas is a 91-unit mixed-income complex that will be opening in 2011, with 20 affordable units. Rents are estimated to be $800 a month for a one-bedroom unit, and $1,000 for a two-bedroom, says Reyes. Some suggest real estate development seems an unusual venture for a health and human services organization, but Reyes says livable housing is a part of La Fe’s holistic approach to community and individual well-being.

“I’m tired of hearing that we should not build more housing in Segundo Barrio,” she says. “The question is not ‘Why is La Fe getting involved in downtown development,'” she says. “It is ‘Why aren’t you?'”