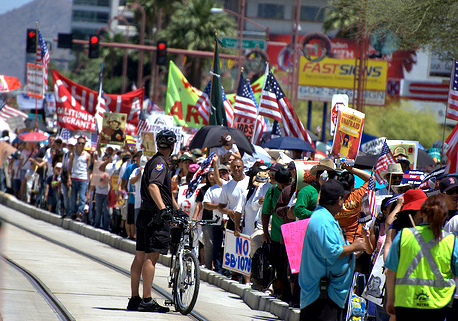 A small portion of the enormous crowd on May 29th. (George Thomson/Borderzine.com

PHOENIX, Ariz. — In an historic showing of political power, as many as 100,000 persons marched through central Phoenix on Saturday May 29th in protest against SB1070 and Arizona’s continue legalized racism.

As I walked I saw and heard the protestors’ chants and demands making it clear to me that  on May 29th, 2010, new political reality awoke in Arizona. A small portion of the enormous crowd on May 29th. (George Thomson/Borderzine.com

The Arizona legislature continued its perceived attempt to preserve Anglo cultural dominance as it passed two more laws in addition to the questions of racial profiling caused by SB1070.

Other laws passed in the last month diminish the preservation of Hispanic culture through public education and another ends the negative influence of teachers with accents.

There is fundamental political realignment taking place in Arizona, in the United States now. The Hispanic near majority is demanding, through political assembly and political speech, that laws that diminish one’s ethnicity, based on racial profiling, or ethnic separatism, have got to end.

With thousands chanting, “Obama escucha …” the evidence is overwhelming of a new majorities fight against SB1070. To Obama, the first mixed-race President, the point is that Hispanics are demanding that he bring the law to the United States Supreme Court.

The Marchers walked the five miles from Central Phoenix to the state capitol in about 3 hours. In speeches at the capitol the Rev. Warren Stewart of the First Institutional Baptist Church in Phoenix said to Obama, “God put you in the White House. You are a person of color. Stand with us.”

At the Arizona Capitol rally, Richard Trumka, president of the AFL-CIO spoke about the ethnic separatism caused by the law. He said,  “Immigrants are not the cause of America’s problems, and Senate Bill 1070 is not the answer.”

Walking with the marchers I heard drums beating, chants and response, musicians playing and even a George Bush look alike. Maricopa Arizona Sheriff Joe Arpaio states he is doing the work that the federal immigration authorities have failed to do. Arpaio said in a recent appearance with Al Sharpton on CNN’s Larry King that it is not about race but about the law. Arpaio said that the sheriff’s office is the only force “tough” enough to address Arizona’s immigration problems and that many, if not most of the criminals in the Maricopa County jail, are in the United States illegally.

Sheriff Joe is known for tactics such as raiding quinceañeras, baptisms and Home Depot parking lots.

Teachers with heavy foreign accents are another problem addressed, symbolically, by the Arizona legislature. The problem of heavily accented teachers in Arizona schools is minimal yet with the legislature’s legal manipulation of the issue, Arizona again appears to be legislating against ethnicity.

I teach on the border in Nogales Public Schools. Nogales schools routinely recruit some of its best teachers from schools or other professionals in Mexico. These teachers, with proper work permits, then fill our deep need for math and science teachers. All have accents, some “thicker” than others. All adjust, nearly all stay in Nogales schools and our schools have gained valued professionals.

In a win-win, our school has a good teacher, with an accent, and the teacher has an American job that could not be filled by an American. In addition to the excellent Mexican teachers being recruited for math and science positions, several teachers from India also teach math and science in Nogales schools. These teachers are often able English speakers, know their content yet lack the cultural adaption the Mexican teachers possess.

In 2000, Arizona voters approved an initiative that required all classes be taught in English. Now, as an outgrowth of that law, teachers who speak with an accent have been banned. Superintendent of Public Instruction, Tom Horne, said of the law, “As you expect science teachers to know science, math teachers to know math, you expect a teacher who is teaching the kids English to know English.” (Fox News) The teacher/accent law is not intended to be directed at any particular ethnic group yet the reality is that in Arizona schools, as is across the United States, teachers with advanced math and science schools are being recruited form outside the United States, particularity from Mexico and India. Teaching is about communication of knowledge and we expect teachers to be understood or for a compromise to be made that is understood by the teacher that one’s superior ability should give way to a universal language like math. This law would exclude a person like Albert Einstein from teaching in Arizona Schools.

The reality is that heavily accented is not a problem in Arizona schools, not one that needs a specific law. If it is a problem, individual schools can deal with the teacher’s assignment, students could choose to take that teacher’s class or not.

In Tucson Unified School District Mexican-American studies were a voluntary component of the District’s curriculum for more than 25 years. In Nogales schools, we are immersed in Mexican culture and heritage, living on the border gives us that advantage. Tucson schools while close to the border and with a large Mexican-American population see a need for such curriculum. Even knowing that one’s ethnic history makes us better Americans the law passed in Arizona this legislative session. The law, HB2281 sates that curriculum that to, “promote the overthrow of the U.S. government, promote resentment of a particular race or class of people, are designed primarily for students of a particular ethnic group or advocate ethnic solidarity instead of the treatment of pupils as individuals.” (AZ 49th Legislature, Second Session, HB2281)

The Legislature ensures assimilation is now legally mandated through it micro management of a schools curriculum. 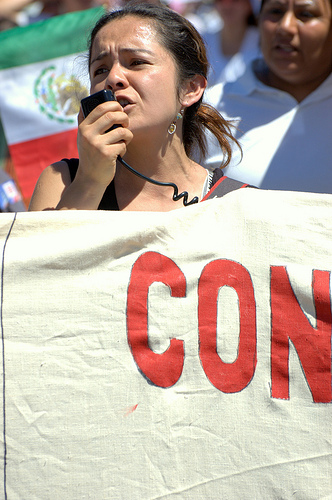 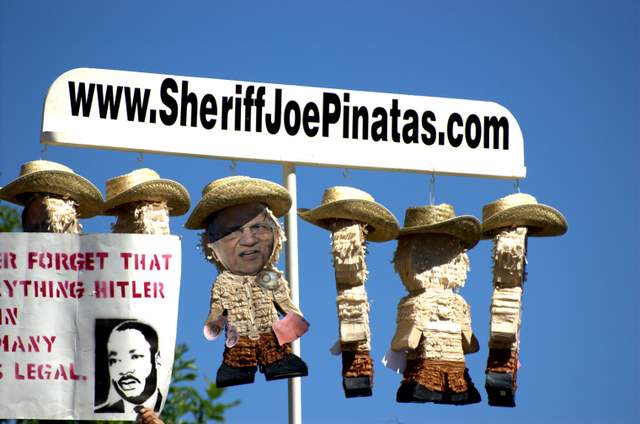 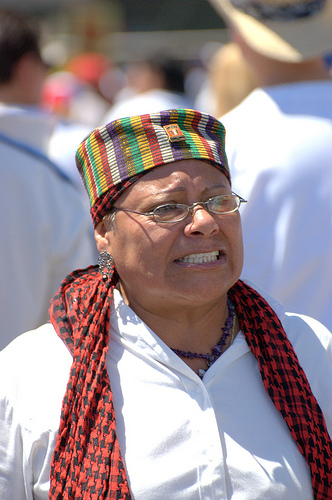 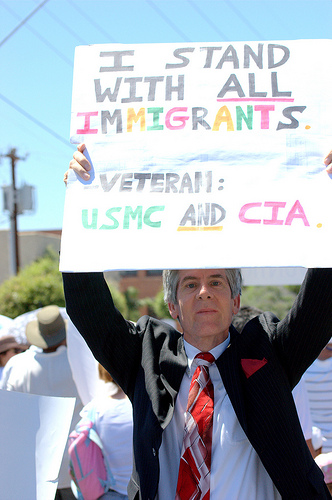 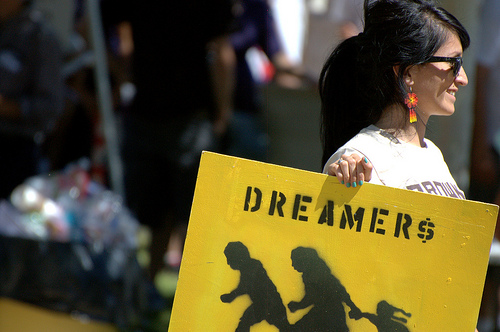 People risking everything to improve their lives show the humanity. (George Thomson/Borderzine.com) 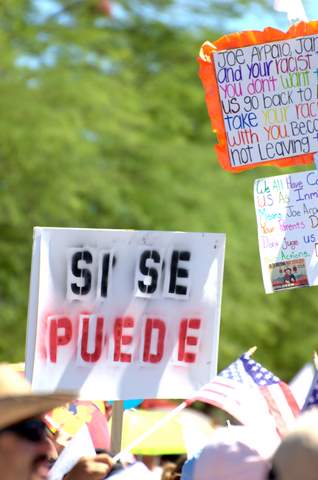 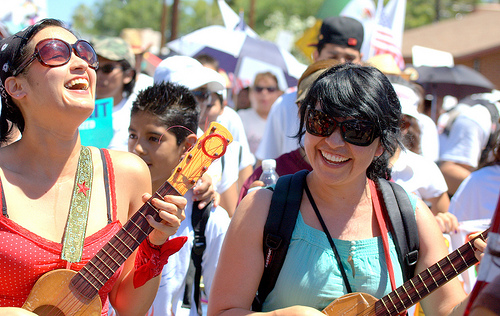 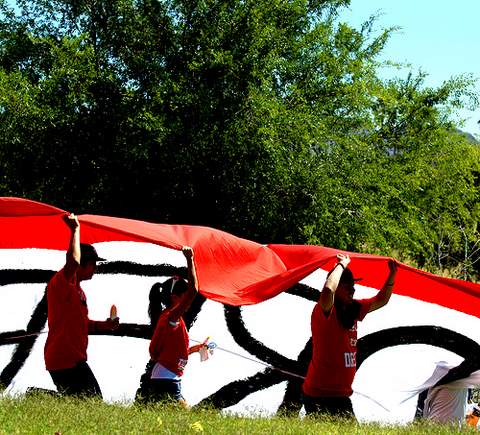 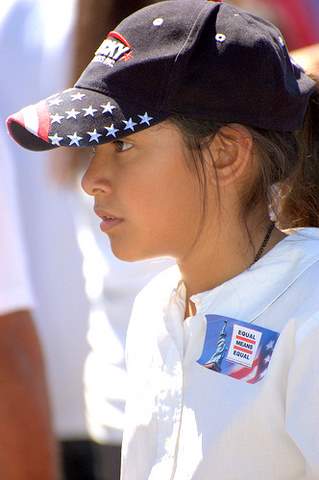 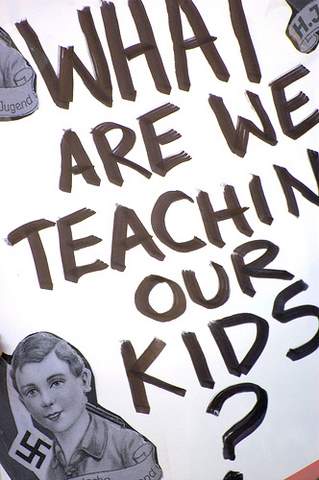 What are we teaching to our kids? (George Thomson/Borderzine.com) 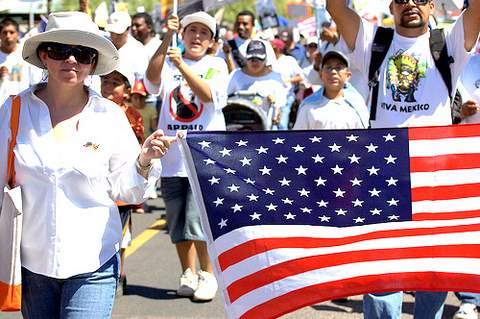