EL PASO, Texas — As El Paso continues to grow in population, so does the dual culture and bilingual language of the region. Because the U.S. is quickly becoming a bilingual country, many El Pasoans now realize the importance of teaching their children both English and Spanish, regardless of their ethnicity.

Lundy Elementary School was one of seven new schools that started the implementation of the Dual Language Program this past 2009-2010 scholarly year. Even in that short amount of time, the program has blossomed, attracting parents and their children from both the Spanish dominant and English dominant speaking spectrums. 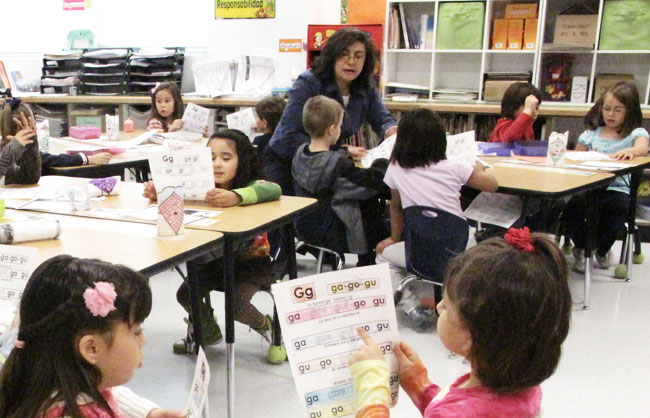 While Spanish dominant parents would say in the beginning, “I don’t want my child in a bilingual program, I want him/her to learn more English,” the harm was evident throughout the child’s inability to grasp the English language fully within that scholarly year.

“It was sad to see parents saying, ‘I don’t want my child speaking in the native language that I grew up in,’” said Lachmann. “So we started the program having mostly English dominant children in the classroom.”

But soon after noticing the significant changes among the English dominant children, Spanish dominant parents began taking more interest in the program.

“They were much more willing to put their children in a classroom where they felt good about their language being accepted,” said Lachmann.

El Pasoans are seeing the benefits of the program. Whereas before, speaking Spanish in the classroom was looked down upon, speaking in both languages in the classroom today is encouraged and commended.  Most of the children in the Dual Language Program also study in the Gifted and Talented Program and must demonstrate higher thinking skills.

The Dual Language Program roots go all the way back to the 1960s in Canada, where students were taught both French and English. The program has caught on in the United States, and has quickly mushroomed nationwide to California, South Carolina, Oregon and New Mexico, to name a few.

Ellen Chavez, facilitator for EPISD, has been coordinating the Dual Language Program for the district, training the teachers on how to implement the program, and once they are implementing it, Chavez helps them to continue their professional development.

“I was working in another district as the Dual Language coordinator and I knew that EPISD wanted to expand the program and I thought that was very exciting,” said Chavez. “I’m very passionate about the program, I believe in it 100 percent,” said Chavez. “Bi-literacy and bilingualism, that’s a given in the program, but high academic achievement is seen because of it as well.”

While high academic achievement through instruction in two languages has proven to be successful, teachers and parents have noticed a change in cultural competence.

“The children know how to get along with people who are different than they are, they know how to function in a different world, and they have open minds,” said Chavez.

Along with cultural competency, the children are proud to be bilingual and bi-literate, a dramatic change since the time of our parents’. The program is bringing awareness of both the Mexican culture and American culture to our border city.

Introducing children classics such as “La Víbora de la Mar” and “Old McDonald had a Farm,” allows the children to expand their mindsets and open many doors that may have once been closed.

2 thoughts on “Lundy Elementary Proudly Speaks Both English and Spanish”