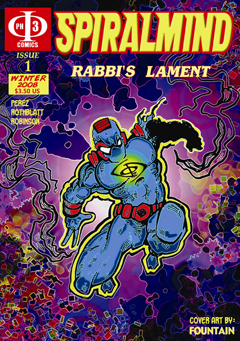 The idea for the main character has been living in Perez’s mind since childhood.

“When I was a little boy my mom would take us to go see the movies,” he said. “Old movies like Dracula, Frankenstein. As a kid that scares the crap out of you. So I asked my mom, ‘Who’s going to fight these guys? Superman should be here.’ And my mom says, ‘Superman doesn’t fight them.’ So I said I’m going to create a character…that will fight these kinds of bad guys.”

Spiralmind is a reflection of his creators. His alter ego, Ben Landry, is also an engineer. Landry designs the hi-tech weaponry used by the bulky blue-and-red-suited Spiralmind. Landry is raised by a priest and a rabbi after losing both his parents, similar to author Rothblatt, who was raised Catholic but has a Jewish father. Their decision to publish the Spiralmind series in Spanish was influenced by the authors’ Hispanic heritage and the bilingual nature of their hometown.

Brad Wilson, owner of All Star Comics in El Paso, thinks publishing a comic in Spanish is a good idea. On a recent afternoon he worked the cash register as customers browsed the store. A nearly 9-foot tall Incredible Hulk statue towered in a back corner.

“No one else has tried it they’ll be the first ones,” Wilson said of the Spanish publication. “I think if it works for them, the other comic book publishers in El Paso might consider putting their comics out in Spanish, which I think will be a very good idea. ” The two major comic companies in the United States, Marvel and DC, have tested the market with a few Spanish comics, including an issue of the Fantastic Four and the El Paso-based series, Blue Beetle. Jai Nitz, author of the Spanish Blue Beetle edition said that although sales for the issue were on the low end, the issue and the series itself demonstrates that parent company Warner Brothers is serious about marketing to a growing Hispanic market. In a border city like El Paso, where Mexico is visible across the interstate, Nitz thinks a Spanish language comic has good potential.

“It’s easy to look literally look out your window and see the other market that you’re not tapping into,” Nitz said.

Perez and Rothblatt, who aren’t fluent in Spanish, turned to another co-worker, Jahaziel Rodriguez, to do the translation for their comic book. Rodriguez is from Ciudad Juarez, Mexico and a native Spanish speaker. Rothblatt said they wanted the translation to have quality and authenticity.

“We wanted people to really read this and think it was written in Spanish for them, which is our whole plan,” Rothblatt said.

When the movie versions of Batman and Spiderman were released in theatres, even non-comic book fans flocked to see them. That’s because at the heart of any good comic is a story people can relate to. Perez says that’s why he and his cousin feel it’s important to make Spiralmind accessible to their Spanish-speaking neighbors and others around the world.

“All characters have difficulties they go through,” he said, “From Clark Kent being from another planet, Peter Parker losing his uncle, Bruce Wayne losing both his parents, yet they still succeed and they still do good and they have limits they will not cross. Those could be examples that we should follow.”

You can catch the authors of Spiralmind on Free Comic Book Day at Rebel’s Comic Vault, 10781 Pebble Hills, from 12 to 4 pm.

One thought on “Spiralmind Comic Delivers in English and Spanish”