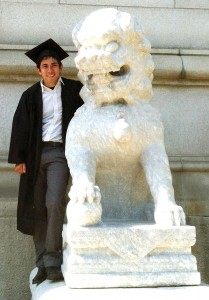 IMPERIAL VALLEY, Calif. – Calexico native and former Imperial Valley College student Luis Flores has been awarded the Judith Lee Stronach Baccalaureate prize to pursue a hands-on solution to educating new immigrants to the U.S. about credit dependency. The $25,000 Stronach award will fund Flores’s “El Valle y la Recesion” project, a visual documentary that will focus on illustrating the difficulties Imperial Valley residents, mainly recent immigrants, struggle with when faced with credit and mortgage decisions. “Rather than blaming immigrants for borrowing too much [money], or for not being educated enough, I want to suggest that there were larger forces compelling immigrants to live a life of credit dependency,” said Flores.  “This project wants to show that the typical explanations of the recession in the region are limited, because they do not look at the history of economic policies in both the Mexicali and Imperial valleys since the 1980s.”

The ultimate result of “El Valle y la Recesion” is to develop an educational and service website, and possibly a bricks-and-mortar service, that will aid border consumers in credit decisions, something that does not exist at this time. Flores, 22, a recent graduate of the University of California, Berkeley with undergraduate degrees in political economy and history, will return to Calexico in August to start his project, which he envisions as a collaboration with IVC, San Diego State University Imperial Valley campus, Universidad Autonoma de Baja California in Mexicali, and the University of Texas El Paso’s student journalism website Borderzine.com.