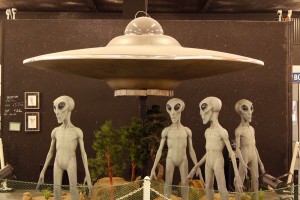 ROSWELL, NM – The 65th anniversary of the alleged crash of an unidentified flying object here attracted visitors from as far away as Australia and introduced a large number of people to the various aspects of the UFO mystery through displays, books and lectures. As has been the custom for many years, around the fourth of July, a dual celebration of this event was held in Roswell, one sponsored by the town and the other by the UFO Museum and Study Center. The Galaxy Fest, the event sponsored by the UFO Museum and Study Center, held its opening ceremonies in the UFO Museum at 9:00 AM, Friday, June 29th. Each year the Museum invites stars from the world of science fiction as well as the leading researchers and authors in the field of UFO phenomenon. Attending this event was Denise Crosby, the actress that played Tasha Yar on the first season of the television program Star Trek: The Next Generation. 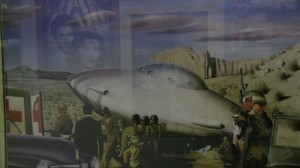