EL PASO — Walking through a dark hall and swinging open the pair of steel gates, museum guests are thrown into a room with walls exquisitely decorated with the memories of this city’s most history-rich neighborhoods.Bright and colorful murals at the El Paso History Museum exhibit surround the viewer with quotes and representations of two of El Paso’s first neighborhoods.Neighborhoods and Shared Memories is an exhibit that shows what life was like in the Segundo Barrio and Chihuahuita neighborhoods as children grew up in the area. El Paso’s oldest neighborhoods continue to thrive in the southern part of the city with an extensive history as a place of refuge and social and economic struggle. Today, vivid murals on aged structures along the two-way streets give an insight into the cultural influences once existed.”We wanted to reach out to all the folks who had not had a voice, who were not represented in the history. The original exhibit plans for this building was that this gallery was designated from the begining to be the headquarters for the neighborhoods exhibit” says senior curator Barbara Angus.”The concept was that even from the beginning the exhibits that were created were directly by the people from the neighborhoods,” said Angus. Each wall represents one neighborhood with phrases from people who lived in the area and their memories of life there. 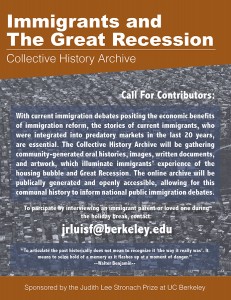 Immigrants and the Great Recession: A do-it-yourself historical archive

BERKELEY – What is “public” about a public history? Is it that these historical narratives chronicle marginalized rather than elite stories? Is it that these types of stories can be publically available, on a website or public library, for anyone to access? Or is it, perhaps, that the goal of this type of history is to engage the public and enable social participation? I think all three. 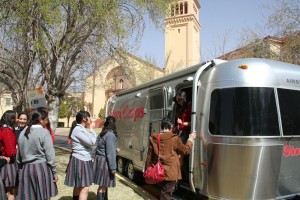 El Pasoans find their place in the American oral history

EL PASO – Eighty-nine year-old Rita Don attended the Loretto Academy here from kindergarten until she graduated from high school in 1939 and her story will now become a chapter in recorded history. Don said she was excited for the opportunity to leave a little piece of herself behind recorded in StoryCorps’ cross-country oral history archive tour. “I wanted to give a little of my time back to the community that gave so much of their time to me.”

StoryCorps, a non-profit organization, has spent the last nine years touring the country in order to fulfill its mission of gathering and organizing a vast collection of oral histories from everyday Americans. And after almost a decade, the organization’s MobileBooth tour will give Sun City residents the opportunity to have their stories make history. Don’s time at Loretto Academy, her years in college, her career as a medical technologist, her dream of becoming a doctor, and the eventual realization of those aspirations are topics she planned to discuss in her recording session.