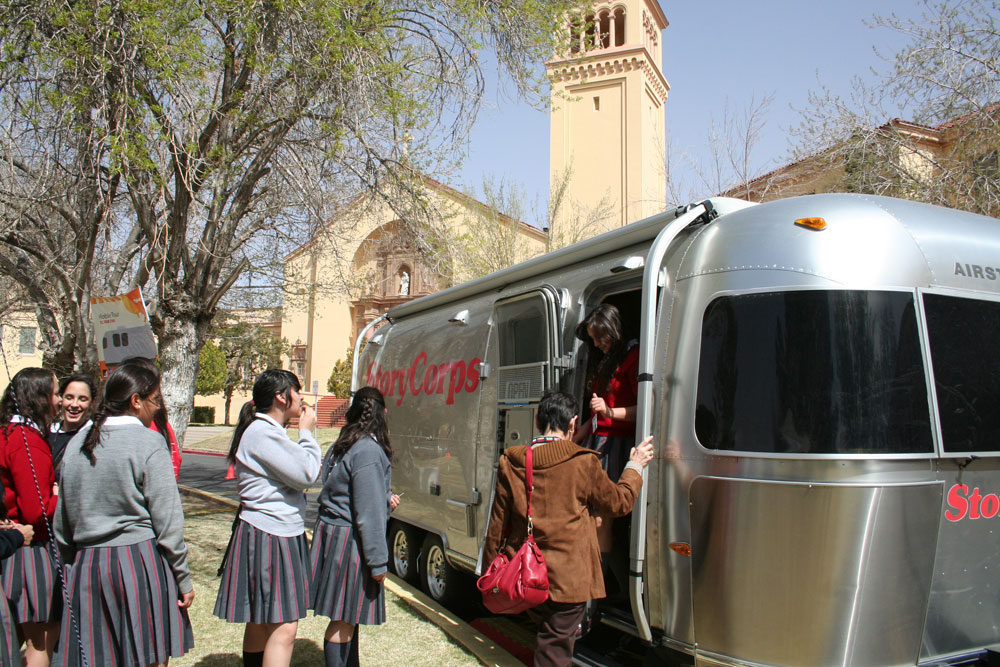 EL PASO – Eighty-nine year-old Rita Don attended the Loretto Academy here from kindergarten until she graduated from high school in 1939 and her story will now become a chapter in recorded history.

Don said she was excited for the opportunity to leave a little piece of herself behind recorded in StoryCorps’ cross-country oral history archive tour. “I wanted to give a little of my time back to the community that gave so much of their time to me.”

StoryCorps, a non-profit organization, has spent the last nine years touring the country in order to fulfill its mission of gathering and organizing a vast collection of oral histories from everyday Americans. And after almost a decade, the organization’s MobileBooth tour will give Sun City residents the opportunity to have their stories make history. Eighty-nine year-old Rita Don waits to board the trailer and smiles as she recalls some of the many memories made at Loretto Academy while she was a student there. (Amanda Duran/Borderzine.com)

Don’s time at Loretto Academy, her years in college, her career as a medical technologist, her dream of becoming a doctor, and the eventual realization of those aspirations are topics she planned to discuss in her recording session. Even though Don never had children because as she jokingly explained she, “could never find anyone to support me in the manner I had become accustomed to,” she was excited to share her story with the rest of the world by having her recorded interview preserved in the Library of Congress for future generations.

The shiny, silver airstream trailer where thousands have told their story stood out against the background of clustered Catholic schoolgirls in uniforms chatting as they walked to their next scheduled class. The trailer parked in front of the historic all girls Catholic school was the center of attention for the opening-day press conference to commence at 10 a.m.

StoryCorps, a national nonprofit organization, made its way into El Paso March 7 for the program’s American MobileBooth tour devoted to recording, preserving and sharing the stories of everyday Americans. The trailer, outfitted with a deceivingly high-tech recording studio, called Loretto Academy home for the next 10-days as local residents were invited to make an appointment to hop aboard the mobile studio and record their stories.

Don was just one of the many women associated with the all girl’s school who planned on preserving their places in history.

This year, the host site Loretto Academy is celebrating its 200th year anniversary. President of the school, Sister Mary (Buffy) Boesen, provided the opening remarks and said the anniversary has reminded her of the wealth of stories that the school’s alums and sisters have to share with future generations.

Since its start in 2003, StoryCorps has accumulated more than 40,000 interviews from almost double that number of participants. Those who partake are interviewed by their own friends and family, or may opt to go alone and have a StoryCorps facilitator conduct the interview. Every session is recorded on a CD, which is given to the participants free of charge, and archived at the American Folklife Center at the Library of Congress in Washington, D.C. should the participants consent.

Select stories are chosen to be broadcast locally or nationally on NPR’s Morning Edition, featured on the Listen Pages of StoryCorps’ website, or transcribed for a StoryCorps book. So far, three books have been published using excerpts of interviews. The book Listening Is An Act of Love is a compilation of memorable stories, Mom celebrates motherhood, and All There Is is a collection of love stories. The shiny airstream trailer that has made its way across the country is parked in front of Loretto Acadamy’s chapel. (Amanda Duran/Borderzine.com)

Anaid Reyes, 25, has been a StoryCorps facilitator for seven months now. As a history major in college with a special interest in oral history, working with StoryCorps was an obvious option for her to pursue. Her job as a facilitator involves greeting the participants, describing the interview process while sometimes assisting, making them feel comfortable and acting as what she called a sound engineer.

“We have to make sure the recordings sound great and are of broadcast quality,” said Reyes, “and it’s not necessarily us interviewing them, but sometimes we might jump in with some clarification questions, like the names of their grandparents who they have been talking about for the last forty minutes but have yet to identify.”

Facilitator Reyes said her most memorable recording happened at the end of a session in Los Angeles, California. The couple interviewing in the trailer were talking about how they met and what their relationship meant to each other. At the end, the boyfriend got down on one knee and proposed. ”Of course she said yes,” said Reyes, “so that was my first StoryCorps proposal.”

Reyes and supervisor Virginia Lora agree that people sometimes come thinking they don’t have a story to tell, but then they start talking – having a conversation, and it turns out they do have a story. Everybody has a story worth sharing.

Editor’s note: A previous version of this story has been modified to correctly spelled Ms. Don’s last name.

An inside look at the actual recording area within the StoryCorps’ MobileBooth touring trailer where thousands of stories have been shared. (Amanda Duran/Borderzine.com)

Invited by UTEP’s oral history department, El Pasoan Joe Gomez, a 1970 graduate of UTEP that was then known as Texas Western College was still trying to decide what he was going to talk about in his scheduled interview slot. (Amanda Duran/Borderzine.com)

The shiny airstream trailer that has made its way across the country is parked in front of Loretto Acadamy’s chapel. (Amanda Duran/Borderzine.com)

Two of StoryCorps’ published books containing selected exerpts of collected stories are available for browsing while waiting to board the MobileBooth. (Amanda Duran/Borderzine.com)

Eighty-nine years old Rita Dawn waits to board the trailer and smiles as she recalls some of the many memories made at Loretto Academy while she was a student there. (Amanda Duran/Borderzine.com)