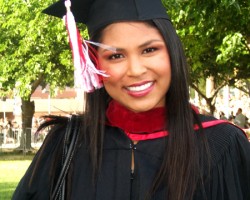 The road toward citizenship: The plight of the undocumented

She has vague memories of the day her parents packed up and brought her and her sister to the U.S. One of them is her arriving at an “airport” though in reality she’d arrived to Sun Valley after crossing the border illegally at the age of three. Growing up, Joselyn Arroyo, 29, would accompany her mother, a janitor at the time, to the KNBC studios in Burbank. She remembers watching the broadcasters and deciding then that it was what she wanted to do when she grew up, oblivious to the hardships she’d face living in the U.S as an undocumented resident. Born Joselyn Ontiveros in San Luis Potosi, Mexico on April 26, 1982, she stands at about 5 feet 5 inches with medium length black hair, tan skin and an athletic build and has always considered herself a citizen of the U.S. despite her illegal status. “I knew I was from Mexico but I didn’t know the logistics of not being and being a citizen,” says Joselyn.