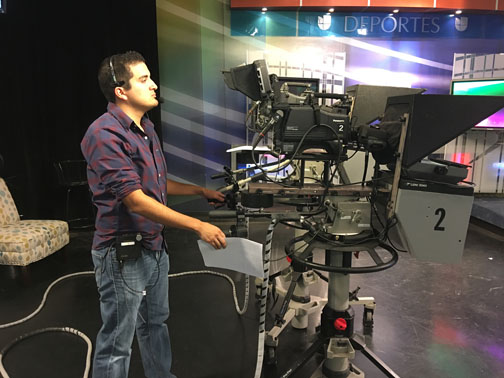 Lessons learned during my internship in TV news

University of Texas at El Paso students preparing to complete their bachelor’s degree in any communications major, such as Digital Media Production and Multimedia Journalism, must look for a media organization to conduct an internship if they wish to succeed in the demanding profession. An internship is fundamental for future journalists entering the job market, employers say. Students pursuing a major in journalism need a place to practice the craft of the profession and local news media outlets in the El Paso-Ciudad Juarez region offer great opportunities for UTEP students to complete their internship training. I had the good fortune of being selected for an internship at Entravision Univision 26, one of the highest -rated stations in the region. News Director Uriel Posada gave me the opportunity to enhance my communication skills during the fall 2016 semester.

More than 900 UTEP students, faculty, staff members, and residents of the El Paso community took advantage of early voting on Thursday at the Student Union on campus to cast their choice for president of the United States. Maggie Ortega, 57, a staff member who helped coordinate and organize UTEP’s early voting day, said she was surprised by the high turnout. City wide, early voting has broken previous voting records, according to local news reports. “This is the highest turnout that we’ve had in years,” said Ortega, who is services coordinator for the UTEP Student Government Association and worked with the El Paso County Elections Department to bring the mobile voting booth to the Student Union from 8 a.m. to 5 p.m. on October 27. The El Paso Department of Elections notifies UTEP staff in advance of the date they intend to set up the mobile voting booth, said Administrative Coordinator Maggie Ortega, who also helped organize the early voting day.

EL PASO – On a recent Saturday in September hundreds of local residents attended a health fair event, sponsored by Entravision 26, at Sunland Park Mall. The annual event provided residents with health and medical information as well as free vaccines, blood pressure and hearing tests. The all-day event featured music, free food, and an opportunity for attendees to have their picture taken with well-known Entravision news reporters and anchors. A primary goal of the fair was to help residents who lack medical insurance and have limited access to health care. One of the primary speakers at the fair was Weather Anchor Aldo Acosta, 53.