IMPERIAL, Calif.—Imperial Valley College had a growth spurt in the last three years with a techno-new science building, expanded parking facilities, updated classrooms, and water-friendly landscaping. While the science building is impressive, parking is now abundant, and learning in 21st century classrooms is a reality, it’s the often-overlooked things like one small, bright desert flower, a lush green lawn, or a 40-foot tree providing relief from the heat that might help to nurture pride and performance in study-weary students, faculty and staff. With this facelift came the new philosophy of landscaping the campus with a more “green-friendly,” energy-efficient technology—xeriscaping. Here is a closer look: 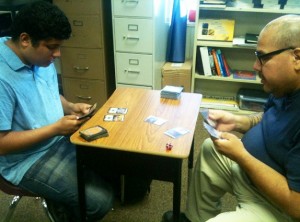 CALEXICO, Calif.–Jovan Rojas had a lot of trouble making friends on his high school campus. For a lot of adolescents, painful insecurities can be a repellant to their peers. “I was not very mature and had problems socializing with anyone,” said Rojas, now 18 and a senior at Calexico High School. “After joining the program I have felt improvement in myself and I am told from tutors that I have improved a lot.”

That program, the After School Safety and Enrichment for Teens, or ASSETs, a grant-based project provided under the No Child Left Behind Act of 2001 and administered by California’s 21st Century Community Learning Centers program, was launched at Calexico High in February 2010 with a five-year $1.5 million grant. ASSETs is aimed at involving latchkey kids, or at-risk teens who have no place to go and nothing to do when that final school bell rings for the day.