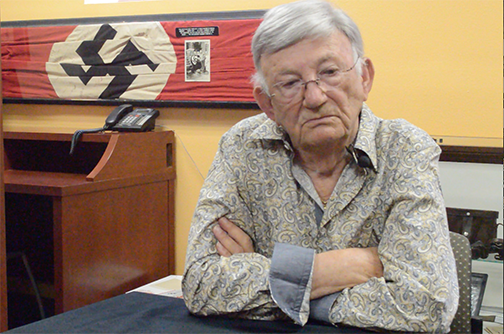 Holocaust survivor’s first act of freedom was to embrace forgiveness

When someone has “put you through hell” it’s often hard to forgive. But Holocaust survivor David Kaplan, who spent four years in a concentration camp, has made forgiving Hitler and the Nazis look easy. “I stop, I relax and then I don’t hate them anymore,” Kaplan, 88, said recently in an emotional interview at the El Paso Holocaust Museum and Study Center. Born on July 20, 1928 in Kaunas, Lithuania, the retired businessman is one of about 35 Holocaust survivors who settled in El Paso after the Second World War and one of just a few still alive in El Paso. When the Nazis and Adolph Hitler rose to power in Germany when he was a child in Lithuania, he and his parents and siblings were forced to move into a small house in the Slobodka Ghetto.