Director of Mexico’s war on drugs to address Border Security

EL PASO – Mexico’s secretary of public security, Genaro García Luna, is scheduled to address the eighth annual Border Security Conference on the campus of the University of Texas at El Paso (UTEP), August 15-16. Luna is in charge of implementing Mexican President Felipe Calderón’s war against drug trafficking and organized crime, which has greatly affected the border region. He is scheduled to give the keynote address on the second day of the conference, which will focus on enhancing security along the U.S.-Mexico border while fostering economic development in both countries. UTEP president Diana Natalicio told Borderzine,“With its location, student demographics, academic programs, research infrastructure and ties to many Mexican institutions, UTEP offers a splendid setting for sharing perspectives and promoting cross-border conversations on border security issues.”

Panelists will discuss a range of topics during the two-day conference including strengthening economic ties between the two countries and the use of technology to enhance border security. Among panelists from the university and the border community are also Janice Ayala, the assistant director of operations for Immigrations and Customs Enforcement (ICE).

EL PASO — Once a foster child herself, Jessica Archuleta now helps former foster children achieve their goals of stability and higher education. “Living through the foster care system didn’t define me. It didn’t get me where I was today,” said Archuleta, now an outreach specialist in the Foster, Homeless and Adopted Resource (FHAR) program at the University of Texas at El Paso. “It was my own experiences in life and how I dealt with them. Realizing that helped me realize I wanted to help other people in their experiences and give them a positive outlook.” Archuleta says she and her brother were placed in child crisis centers more than 20 times. 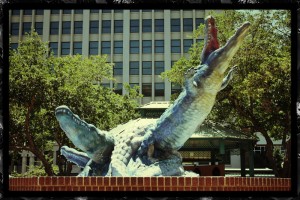 What is your opinion of the proposed changes to San Jacinto Plaza? – Video

EL PASO — Downtown El Paso could soon lose one of its most beloved landmarks, created by one of the city’s most famous artists if a plan to renovate San Jacinto Plaza is approved and funded by the city council. Luis Jimenez’s fiberglass sculpture, “Los Lagartos” has stood at the center of the plaza since 1995, would be replaced by shrubbery trimmed in the shape of alligators in the renovation plans donated by Mills Plaza Properties, owned by prominent El Paso businessman Paul Foster. El Paso art historian Miguel Juarez is spearheading the movement to keep the statue in the city’s plans. “The alligators are the soul of El Paso,” Juarez said. “Historically the plaza was a meeting place.

EL PASO – Juárez journalists, Rocío Idalia Gallegos Rodríguez and Sandra Rodríguez Nieto, were awarded the 2011 Knight International Journalism Award last week for their investigative work on El Diario De Juárez, in the world’s most violent city. The award symbolizes a “valuable recognition” of the work of journalists in Ciudad Juárez, Rodríguez said. She hopes that it also will change the commonly believed notion that Mexican reporters on the border have been silenced by the lawlessness in the embattled city. Joyce Barnathan, president of the International Center for Journalism said, “These extraordinary journalists dare to tell stories that few have the courage to address. Because of them, we have an essential understanding of the tragedies faced by citizens in México.”

Rodríguez’ and Gallegos’ investigative reporting has done much to expose corrupt government officials and the ruthless drug cartels battling for control in Juárez and other parts of México.

The Caravan for Peace with Justice and Dignity, led by poet and activist Javier Sicilia settled in at the plaza as the poet told a crowd of several hundred about his son’s killing and stressed once again that the drug-war murders in Mexico are non-discriminatory. If something isn’t done to stop the killings, anyone could be a victim, he said. “It’s a war that no longer distinguishes. Any Mexican can be assassinated, can be a victim of crime or repression,” Sicilia said.

EL PASO, Texas — To stop cheats, UTEP faculty and staff take a proactive approach to educate students on the pitfalls of academic dishonesty. Of the many challenges that today’s students face, one of the biggest is the temptation to cheat. With a wealth of knowledge just a mouse click away, students can easily Google answers to math problems, email each other answers, or simply copy from published sources for term papers. In an era where technology abounds, teachers and professors have learned to stay on their toes when it comes to what is and isn’t allowed come test time. Many students will encounter a list of devices that are not allowed in class printed in their syllabus on the first day of class.