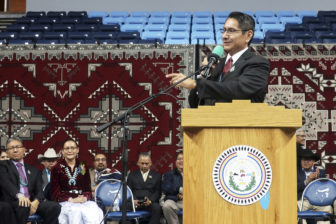 SANTA FE, N.M. (AP) — The leader of one of the largest Native American tribes in the U.S. called Wednesday for the governor of New Mexico to end efforts to fight a court ruling that orders improvements in education for members of his tribe and other vulnerable groups. The comments from Navajo Nation President Jonathan Nez come ahead of a court hearing next week in which Democratic Gov. Michelle Lujan Grisham will ask a state judge to dismiss a consolidated lawsuit representing Native American and Hispanic plaintiffs. “The lawsuit needs to be pursued so Native students can be provided adequate education programs and services necessary to learn and thrive,” Nez said. “Our students deserve an educational environment that prioritizes their culture and unique needs. It is time for our Native students to have the same opportunities as other students.”