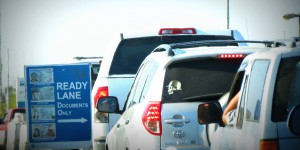 IMPERIAL, Calif.– With Congress drafting out a concrete plan for immigration reform, students and staff at Imperial Valley College shared their opinions on the matter. About 11 million undocumented people in the U.S. who entered illegally could be offered amnesty and a path to citizenship.

Cleaning up a neighborhood in Calexico, Calif.

to do something about it because this is where our children are going to grow up,” said Saul Garcia during the Kennedy Gardens neighborhood clean-up on Saturday March 9, 2013. Garcia joined forces with Javier Gonzalez, the KG Neighborhood Watch leader, to organize a cleanup for the Kennedy Gardens neighborhood and park in Calexico. Gonzalez wanted to organize an event where residents of the neighborhood and volunteers from the community got together to fix, paint, and clean up their parks and streets. Gonzalez and Garcia worked hard to get permission from the city as well as garnering donations for supplies. The City of Calexico and the Imperial Irrigation District provided paint and tools for the event.

CALEXICO, Calif.–The Camarena Memorial Library held its Read Across America Family Night on Tuesday Feb. 26, 2013. Children as young as toddlers and their families participated in the various activities designed to foster a love of reading. They rotated from arts and crafts to story time, games, and snack time. “It’s a program we offer for children to implement reading from an early age, so we invite all families to come by and take advantage of the program,” said Veronica Torreros, an administrator at the library.