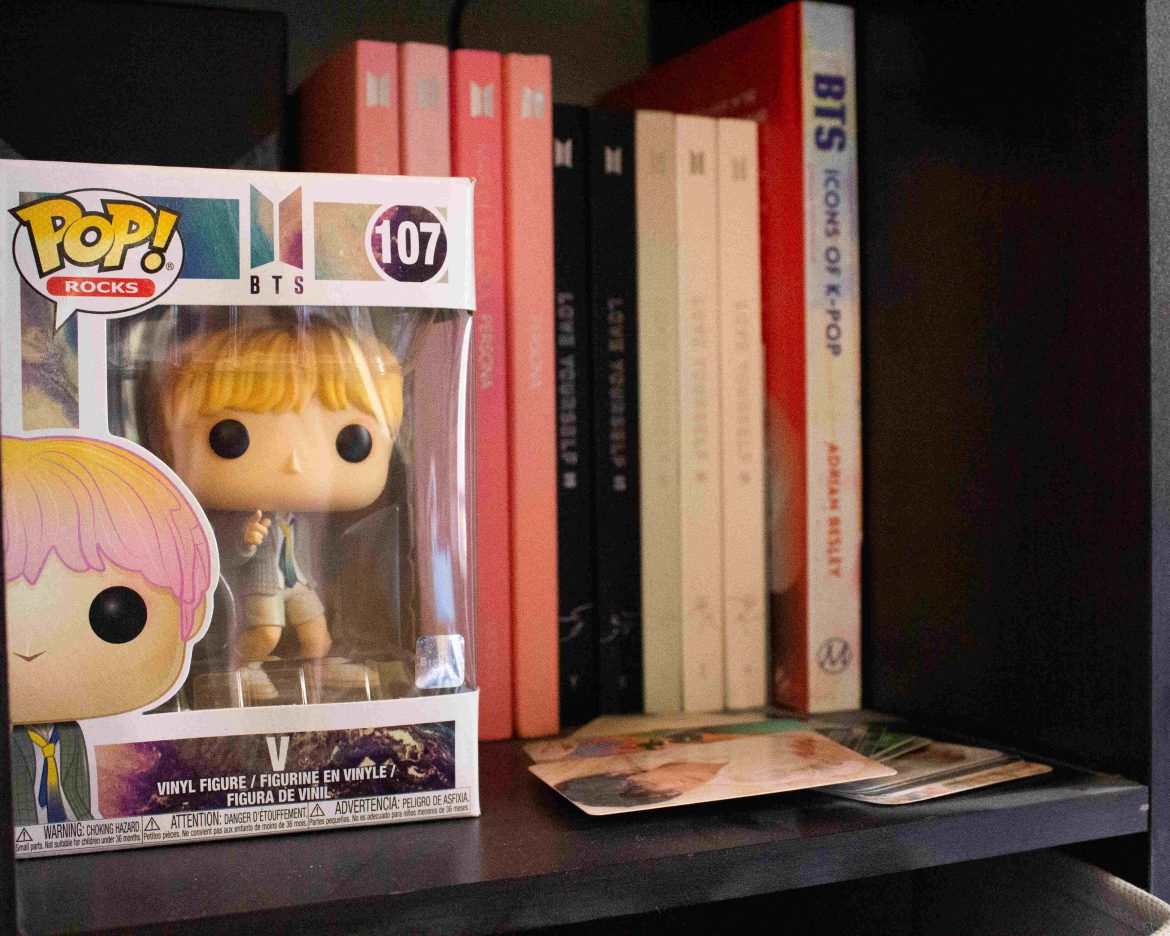 Collecting albums and other novelty items is like a right of passage when becoming a K-Pop fan. Photo credit: Maryam Ragheb

I was first introduced to K-Pop at the end of 2019, when Grammy nominated artist Halsey and Korean band BTS collaborated on Boy With Luv.

At the time, I was going through a rough patch to say the least, unmotivated and unhappy with life. Something about the bright, colorful music video and catchy lyrics that had me humming “oh my, my, my” to myself for days felt like a refreshing new turn in my life.

Before that, I was into alternative and punk rock. I still am, but there is a uniqueness to being a K-Pop fan that is unlike any fan experience I have ever had.

Days, weeks and a few music videos later, I found myself interacting with fans both in person and on the internet. I ended up meeting two of my best friends because they walked into my job and I noticed their photocards in their phones. I have made friends on the internet across the country, even all the way in London.

Groups like BTS and Blackpink have become recognizable names when it comes to K-Pop, and their existence and impact have become doorways for thousands of fans to discover new groups.

From Seventeen and NCT to girl groups like Twice and Itzy, there is an array of artists and sub-genres of Korean music to discover.

Each group also has a nickname given to their fans, chosen by the group themselves.

BTS fans are called ARMY, an acronym for Adorable Representative MC for Youth. Seventeen fans are dubbed Carats, for a 17 carat diamond. NCT fans go by NCT-zens, a play on the group’s name and the word citizens. The list goes on.

Because these names are chosen by the groups, it inherently creates a deeper relationship between fan and artist. These names also become identifiers across fandoms, much like Beliebers and Directioners back in the mid-200’s.

Not only does each member and group have unique qualities and personalities, but fans can pick their favorite members or ones they attribute to themselves the most. Dubbed “biases”, fans can collect various memorabilia including headbands, flags and the most popular, photo cards.

These photo cards are part of a marketing strategy to boost physical album sales. While buying physical CDs seems long gone, K-Pop groups have revived the medium. In 2020, BTS’s Map of the Soul: 7 sold more traditional (physical) albums than any other artist that year, according to Forbes, coming in at 473,052 units. 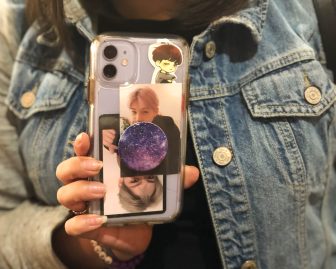 Along with CDs, these albums come with photo-books from various concept photoshoots, download codes, posters, and most importantly photocards. These 2×3 cardstock photos are placed in albums in randomized order. Not only are there different versions of each album to choose from, but the more albums fans buy, the greater the chance is of getting their bias.

Photocards have also become a non-verbal form of communication for K-Pop fans. Most carry their favorite photocard inside of their clear phone cases, creating an instant conversation-starter and allowing fans to create connections. 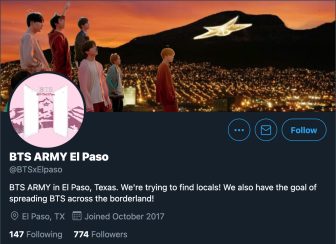 Laura Gonzalez is one of the admins for El Paso ARMY, a page dedicated to connecting BTS fans in El Paso and Juarez. The Twitter page has over 700 followers. She says that she came up with the idea after being inspired by other ARMY groups across the United States who rallied together to try and get the group radio play on popular stations like 93.1 KISS FM, 98.3 EXA FM and 104.3 HIT FM.

Since 2017, she says the amount of ARMY in both El Paso and Juarez have increased.

“With the common goal of getting radio stations on both sides of the border to play BTS, ARMY have been able to achieve what we once thought was impossible in both cities where the dominant music languages are English and Spanish.”

In a community that is already both bilingual and bicultural, throwing a third into the mix would normally seem foreign. However, K-Pop groups like BTS have proven their ability to transcend the boundaries of both language and culture.

BTS fans created an ARMY Census in order to record demographics of the fandom across the globe. 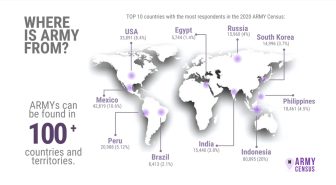 A graphic from ARMY census showing the global placements of BTS fans. via https://www.btsarmycensus.com/results

According to their findings, which recorded responses from 402,881 fans from over 100 countries, roughly 10.6% of BTS fans are in Mexico.

Other countries recorded in the census include Egypt, Brazil, India and Indonesia. The United States recorded about 8.4% of fans and is the only predominantly English-speaking country in the census.

These findings can suggest that not only are fans from already bilingual and bicultural backgrounds able to connect through a completely foreign entity, but they have an eagerness to learn more about Korean culture in the process.

Along with meeting new people within the fandom, many K-Pop fans take the opportunity to learn more about Korean culture and language. Some have taken it on as a hobby, while others use it as a way to have a better understanding of lyrics as well as educating themselves on the culture.

K-Pop concerts allow fans to step into an entirely different world filled with over-the-top productions with 100-foot LED screens, pyrotechnics and confetti. The crowds are so large, concerts are reserved for big arenas like the United Center in Chicago and the Rose Bowl in Los Angeles. Fans from all over will frequently get on a plane or make a drive across states to see their favorite groups. 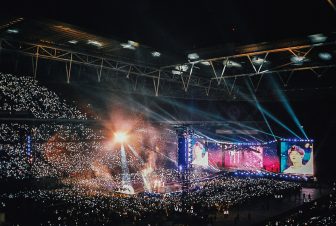 BTS performs at a sold out Wembley Arena in London, England. Photo by Hannah Driscoll.

In January 2020, I flew to Chicago to meet a group of 9 women, share an Airbnb and see Seventeen at the United Center. I have never been above couch-surfing or traveling for concerts in the past, but never went with such a large group.

It was my first all-day concert since I went to the final Vans Warped Tour in 2018. K-Pop concerts aren’t just an event you show up for an hour before doors open. It’s almost an unspoken law that you need to wake up at 8 a.m., spend the entire day roaming around the venue meeting other fans. It is not uncommon to notice the fan you saw in the airport sitting two rows in front of you. 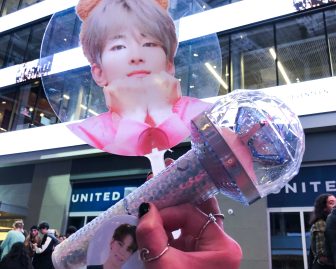 Fans waiting for doors to open at the United Center in Chicago can buy Seventeen's official lightstick and other merchandise. Photo credit: Maryam Ragheb

Fan groups in respective cities will host café events or dance parties outside the concert venues while they wait for doors to open. Artists and other creatives within the fandom hand out goodie bags filled with freebies of photo cards, stickers and homemade jewelry.

There is a feeling that you’re among family.

It’s a feeling that I was convinced didn’t exist beyond 1,000 capacity rooms where I could crowdsurf and trust a group of strangers enough to make sure I didn’t fall.

As soon as three of us walked to our seats just 5 rows from the stage, the girls behind us became just as emotional as we were. They were also amazed at how close our seats were. While we waited for the lights to come up, we talked about the band, about the one member who was on a break for mental health reasons, and who our biases were. I remember the girl next to me cracking jokes to keep us from crying because we were so emotional about being there. The other women we Airbnb’d with texted us saying they could see my bright pink hair all the way from their floor seats that were right by the stage.

Most importantly, K-Pop becomes about creating greater friendships, fostering a newfound love for the music and the community that transcends the boundaries of language and culture.