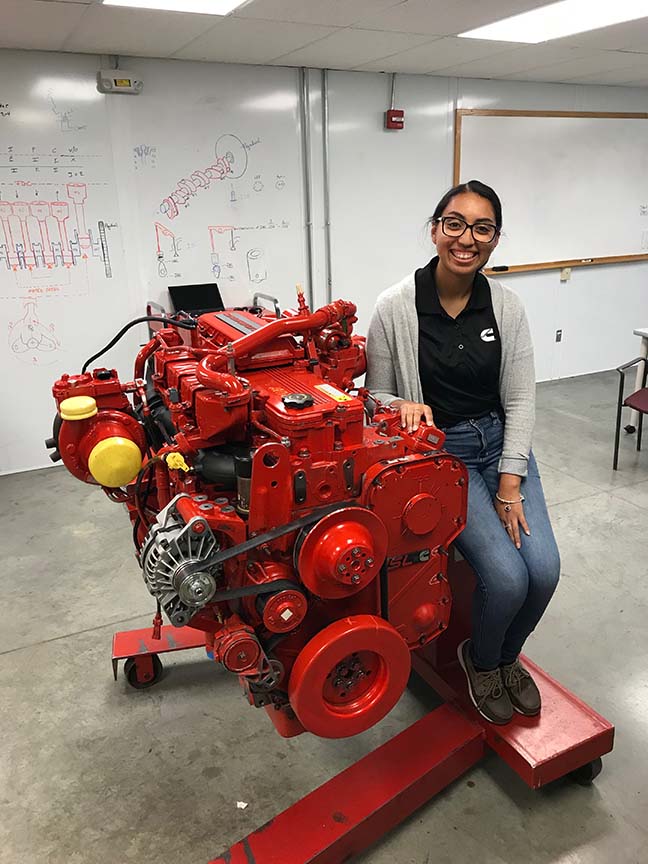 Walking into her intro to computer science theory class as a freshman at the University of Texas at El Paso, Montserrat Molina felt out of place. The room was full of men, except for three other women besides herself.

“I felt very scared. I was very intimidated,” said Molina, who was majoring in computer science.

Molina said the experience was eye opening. It was the first time she felt like a minority and that she didn’t belong. But she stuck it out and continued to follow her degree plan

Molina’s experience is not an isolated one and many young women choose not to pursue college studies in the STEM fields of science, technology, engineering and math. The challenges to attracting and keeping more women and Latinos in STEM have gained attention among researchers and educators.

Ann Gates, vice provost and professor of the Computer Science Department at UTEP, is also a founding member and lead of the Computing Alliance of Hispanic Serving Institutions (CAHSI), a nationally recognized network of more than 60 colleges and universities that focus on the recruitment, retention, mentorship and advancement of Hispanics in computing.

“The biggest problem we’re facing at UTEP is the Latinas, the low number of Latinas that go into computer science and graduate,” Gates said. “UTEP is a little bit higher than most of the country, we’re almost at 20% within our department.”

In 2019 Molina landed in a summer internship with Uber in California. Her experience at Uber was very similar to what she had experienced in the classroom, the lack of diversity in race/ethnicity and gender. 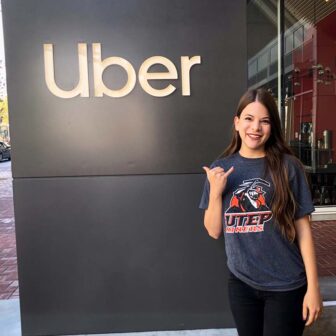 Montserrat Molina shows her school pride while at her internship at Uber headquarters in San Francisco in 2019. She was a returning summr intern in with Uber in 2021. Photo credit: Courtesy photo

Molina returned to intern for Uber in the summer of 2021 in a remote position due to the pandemic. She tries to support other Latina students in their STEM careers by helping them to apply for internships and grants.

“Latino women, we are a huge minority (in STEM), and I hope that’s something that will change in the future. Somehow, I would like to empower more women to go into the field,” she said.

Alejandra Casas is a first-generation college student and a Latina who pursued her master’s in systems engineering at UTEP in 2021. She served as the president of the Society of Women Engineers at UTEP. This student-led organization empowers women in potential careers as engineers and leaders to improve and demonstrate the value of diversity.

“We try to stimulate and empower women to continue their education and provide kind of a source in a community for women to feel more included,” Casas said.

At SWE, they provide mentorship to students, advise them on classes and help them fill out grants and internship applications.

Casas got involved with the support group after encountering similar experiences as Molina of feeling isolated in classes and internships where there wasn’t much diversity.

“I was either the only Hispanic or the only female. Multiple layers can put you down,” Casas said. “You have to really stand your ground, and there is no room to second guess yourself. Because the moment you start second-guessing yourself, others are going to second guess your decisions automatically.”

Throughout her time in college, Casas interned with different companies: Toyota, Raytheon, Lockheed Martin, and Boeing. In the summer of 2021, she did a remote internship with Microsoft.

She encourages young girls to have confidence in pursuing opportunities in STEM.

“Just apply, I think we think we have to check all the boxes when doing an application, and it just because you see one that it’s like, ‘oh, I don’t have the skills, or I don’t think I’m a good match’,” Casas said. “Always apply, you never know, and most of the people they’re looking for is just your willingness to learn.”

Cathy Chen is the co-founder and executive director of Fab Lab, a non-profit organization in El Paso that offers free STEM education for children in the Borderland. The program, known as Fab Kids, is supported by grants.

“It starts with younger kids, right? If not, they don’t have the opportunities or to imagine or think outside of the box, and we just follow the same path,” Chen said. “I think it happens with a lot of careers.”

As one of the few women engineering students Casas believed more STEM programs should be taught in all school districts in the region. She wishes to had been exposed to engineering earlier in life when she was in the Clint Independent School District, which didn’t have a STEM program.

“There wasn’t even like robotics,” Casas said, explaining private lessons weren’t an option either. “Sometimes applying for camps can be expensive, or sometimes you don’t have the resources just to apply to something I think is quite unfortunate,”

The importance of bringing these opportunities to younger students is the same as working as a community to retain talented college graduates who leave town for job opportunities, Chen said.

In 2018, El Paso was declared a Microsoft TechSpark region, an initiative aimed at bringing a bit of the Silicon Valley to the middle of the country. The program promotes the infusion of transformational technologies into the local economy through investments in computer science education in high schools, digital skills training, high-speed broadband and technology for nonprofits, according to Microsoft. The Southwest Regional Manager for Microsoft in El Paso is Chen’s husband, Gustavo Arriaga.

Gates is also involved in this initiative and working closely with the TechSpark team.

“The idea was to bring in to build a community, invest in the community, from an economic development point of view, but also bringing together companies locally in El Paso,” Gates said.