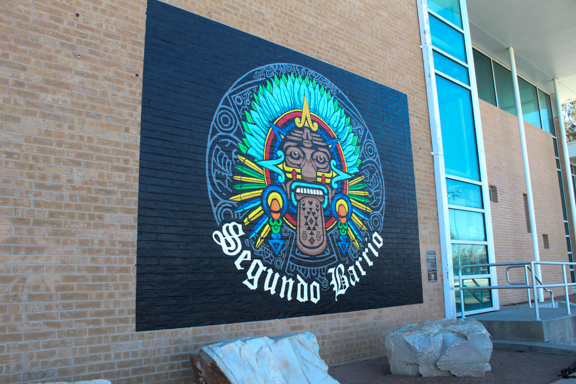 This mural was painted in December 2020 as a Christmas present to the Segundo Barrio by artists Francisco Delgado, Francisco Camacho, and Bobby Lerma. Photo by Victoria Rivas, Borderzine.com

EL PASO — Three artists who grew up in the Segundo Barrio collaborated to create the mural “Quinto Sol- The Rebirth,” in south El Paso.

Francisco Delgado, Francisco Camacho, and Bobby Lerma united to paint the mural to inspire children from the neighborhood with memorable artwork.

Delgado calls himself a “bordeño,” an artist whose artwork is a mashup of being a Chicano and a “fronterizo.” It focuses on social and political issues in the borderland. He has painted numerous murals, including the popular “Sagrado Corazón,” or Sacred Heart which is also located in the Segundo Barrio neighborhood.

Camacho’s artwork is influenced by graffiti and hip pop and he incorporates it with Chicano and pop art.

The design features an Aztec with bright jade-colored feathers and Segundo Barrio written in big white letters. According to the artists, the mural is designed to inspire pride, hope, and “ganas,” or drive, to the people of the Segundo during these difficult pandemic times.

The mural at Seventh Ave. and Florence St. reflects neighborhoods roots. The Aztec figure’s skin color is light brown to represent the people of the barrio. The ear spools represent a child’s progression in the community. The tongue’s piercings and tattoos honor the elderly and their families according to the artists.

The jade colored feathers represent the brightly colored headdresses made from the Quetzal bird ‘s feathers and worn by Aztec leaders, like Moctezuma. “Of course, the feathers mean a little more because the neighborhood is where you develop,” Lerma said.

The artists finished the mural in December 2020 and it was a Christmas gift for the people of the Segundo Barrio.

“It’s something that is going to outlive us, way beyond our time. This project was more than just us. It’s for the community. It was for them to walk by, to take pictures, and to admire it,” Camacho said. 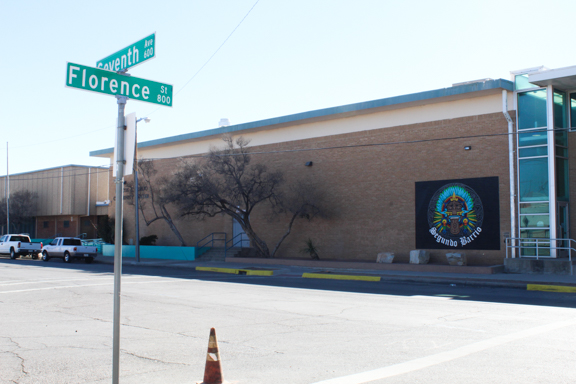 The pandemic has also allowed the artists to focus and spend more time on their individual artwork after their gallery exhibitions and other projects were canceled.

“I could either be sad about it, or I could just keep creating. I think this slowed down everything for me so that I could continue creating. I still did some things in my studio. This was possible because of it, the mural,” Delgado said.

Both Delgado and Camacho also sell their pieces to anyone interested in collecting their designs. “Anything and everything is for sale. I love creating artwork for myself, to begin with, but I love it when somebody else likes that art and if they are willing to buy it or willing to ask for a print. Everything is available,” Camacho said.

Lerma had to shut down the Segundo Barrio Apparel Company he runs for a couple of months because of the pandemic. During that time, he digitized his designs and created more items to sell featuring artwork. It’s now reopened on Saturdays.

The artists see the mural as their gift to the neighborhood. “Now it belongs to the people,” Delgado said. “They own it, and it’s posted right there, Segundo Barrio.

Rich in culture, history, and tradition, the mural also represents the hope of a new generation.

“We’re still here, times have changed, but the community and the barrio still continue to flourish. So, the rebirth is there, and it’s part of what the mural stands for,” Camacho said.

Victoria Rivas majored in multimedia journalism at UT El Paso. She served on the Borderzine staff in spring 2021.