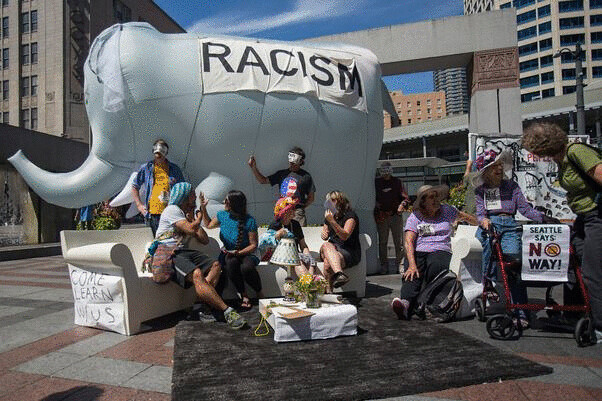 In 2015, Seattle passersby were invited to take part in a public interactive art installation to expose racism as the “elephant in the room.” The event was organized as part of Backbone Campaign's annual week-long Localize This! Action Camp. (Credit: CC by 2.0)

If you’re white and live outside of the urban centers where most protests have occurred since the murders of George Floyd and Ahmad Arbury, it’s a scene you’ve likely experienced any number of times. It speaks volumes about where we are as a country a half-century after Martin Luther King Jr. laid down his life to try to solve our enduring race problem – a uniquely American bog that today somehow encompasses both reasonable progress and no progress at all.

It can happen almost anywhere, anytime. Months before the current crises, I was at a local restaurant’s bar when the talk turned to politics. The owner was carrying on about how much he loved President Trump’s tough talk about solving the homelessness problem, as if that problem hasn’t bedeviled America’s leaders for the past 50 years. But to the restaurant owner this sounded great because, as he said, the homeless don’t want to work — and he’s sick of paying to take care of them. “They sit out on the stoop smoking reefer all day!” he bellowed.

Then a customer chimed in that he’d just spent a week training a new employee named “Shanika, Sharika, I can’t even pronounce it.” He added that she was eight months pregnant. He was furious because she took an online test to get the job, whereas when he started years ago he had to take a written exam in person at a testing center.

And yet, as this powwow was winding down, a teenaged African American waitress approached the owner and asked if she could leave early because she needed to study for a calculus exam. He kindly told her that it was no problem, then turned to us and said, “She’s OK.” His snarl of a few moments earlier was gone. The employee of course was not anywhere near us when that conversation occurred.

If you were to call the restaurant owner or his customer racists, they would consider those fighting words. The owner treats his employees well, black or white, and the customer moonlights in music and often performs with black musicians. Both have accepted many societal changes, particularly the social stigma of being openly racist.

But their resentments linger, so they’ve dialed them back into code and convinced themselves they are fair-minded, although you most definitely will not see them out protesting racism. Code talkers profess the same rationale: If black people play by their rules, work hard, and keep their heads down, they’ll treat them as fairly as anyone else. So that’s progress, right? Well, yes, perhaps, if you ignore that it puts African Americans in a state of perpetual probation: When they behave, they’re OK; when they don’t, they’re black.

And we all know what that means.

In case you just flew in from Nepal, let me translate the narrative of the restaurant scene for you: Most blacks don’t want to work, that’s why so many of them are homeless, and we (white people) are paying for it. Make no mistake: The guy smoking reefer on the stoop is black, and so is Sharika or Shanika – note the not-so-subtle alleged confusion about her name. “Pregnant” means out-of-wedlock (quite possibly with the pot smoker on the stoop), and of course Sharika/Shanika only got the job because she’s black, and now her white colleagues have to cover for her.

Welcome to race relations in 2020 America, where we still have a long way to go. In a country that is more of a melting pot than ever, a huge swathe of the population can be described as white code talkers.

The irony of white code talking is that while black people don’t hear it much, they know perfectly well it’s out there, and they’re left to trying to figure out who is and who isn’t talking behind their backs. That’s because the code talkers are usually careful about where and to whom they speak. The audience for the code these days is more often white, especially if the code talkers believe you’re a “safe” listener who won’t squeal on them. The classic trope is: “You can’t say anything these days or they’ll think you’re a racist.”

When I shared my epiphany about code talkers with my wife, who is black, she shook her head at my naiveté, as if to say, “It took you this long to figure this out?” And I can already hear my liberal-minded friends bleating: “Why didn’t you say something!?”

If I see an overt act of racism, I will say something. But recent events aside, that’s not always how it plays out. My wife and I have never had such an experience, which is seemingly a step in the right direction. Beyond that, my response to liberal outrage is:  Really? That’s a marvelous sentiment in your gentrified urban neighborhood where everyone agrees with you, and where you have a hissy fit about people who wore blackface 30 years ago, which of course simply reinforces the code talkers’ paranoia. Get out of your bubble more and you’ll see that code talk is  plentiful, especially among the generations older than millennials. Where I live, if I challenged every code talker I’d be out of breath in a week.

So are we a complicated work in progress, or is it all just more of the same?

On the one hand, many white Americans who may have a chip on their shoulder have nevertheless accepted, sometimes begrudgingly but sometimes proudly, our progress in eradicating the worst evils of racism. They have African Americans in their lives and treat them respectfully, at least to their face.

On the other, their anger still smolders, and when they need to vent, they wait until the African American computer whiz is out of earshot, take stock of who’s in their little audience, and pull out their code when they’re certain it’s safe. It murmurs its way across this country every day. We’ve tried to legislate and stigmatize it away, but it festers still, and we’re coming to learn that it boils over into violence more than we think, whether in Georgia or Minnesota or countless other places. Maybe as a country we just need more time; or maybe we’re just devolving into a society with way too many code talkers living under the delusion that if the white sheets are gone, so is our race problem.

This article was originally posted on RealClearPolitics.com on June 14, 2020 and reprinted with permission by the author.

David Einhorn has worked as a journalist for Knight-Ridder newspapers and as an international development worker with the U.S. Peace Corps. Inter-American Development Bank, and International Monetary Fund. He has worked and lived overseas in such countries as Paraguay and Haiti. He is also a jazz bassist and today works with Caribbean jazz artists such as Reginald Policard of Haiti and Luther Francois of Saint Lucia. He currently lives in Palm Beach Gardens, Fla.