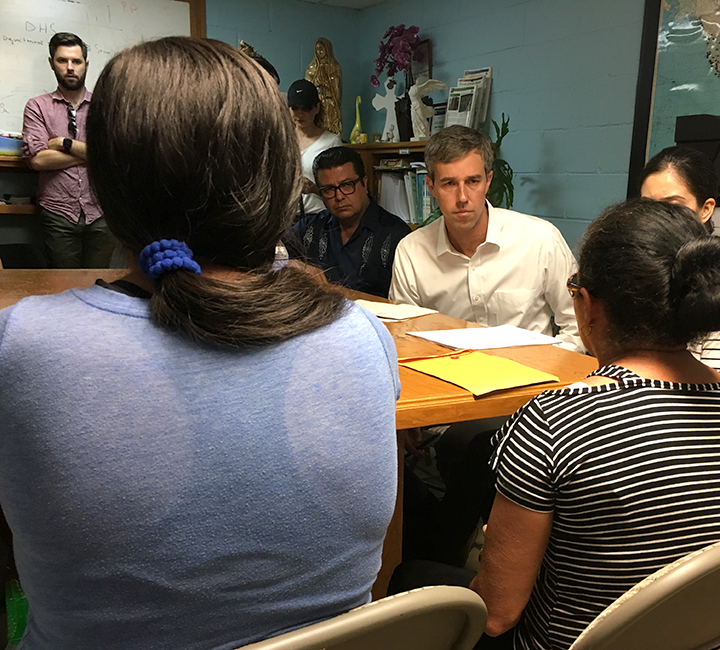 O’Rourke met with asylum seekers at a burrito restaurant and at Juárez’s largest migrant shelter. He criticized several policies: metering, which strictly limits the number of migrants who can approach ports of entry to seek asylum; Migrant Protection Protocols, the “remain in Mexico” policy that has sent thousands of asylum seekers back across the border while their immigration cases are decided by U.S. courts; and family separation.

“We put them in this precarious position, we have caused this suffering. We also have the opportunity to make this better and to make this right,” O’Rourke said after hearing stories from several migrants.

The O’Rourke campaign said the former El Paso congressman is the first Democratic presidential candidate to visit a foreign country this election cycle.

The Trump campaign pounced on O’Rourke’s visit to Juárez shortly after a reporter tweeted a photo of him meeting with migrants at the Casa del Migrante shelter.

“Could Democrats make it any more obvious that they couldn’t care less about actual American citizens?” Matt Wolking, the deputy communications director for the Trump campaign, said in a tweet. “Beto could visit a homeless camp in California or an opioid addiction center in rural West Virginia. He could meet with Angel families. But he’d rather campaign for president by talking to people who can’t even vote.”

O’Rourke and other Democratic candidates have focused on Trump immigration policies in recent days amid reports of inhumane treatment of children in Border Patrol facilities, as well as a viral photo of a father and daughter from El Salvador who died while trying to cross the Rio Grande at Matamoros, Mexico.

O’Rourke on Sunday focused on a policy that hasn’t gotten much attention from other candidates, even though it is a key component of the Trump administration’s efforts to slow the number of families from Central America coming to the U.S.-Mexico border.

The impact of Migrant Protection Protocols

Migrant Protection Protocols, which began in January, requires some asylum seekers to wait in Mexico while their cases are decided in U.S. immigration courts. The migrants are allowed to come back to the United States for their court dates, but otherwise have to wait in northern Mexico border cities.

The Mexican immigration agency has said more than 15,000 migrants have been sent back, including almost 7,000 from El Paso to Juárez. Mexico and the United States agreed to a massive expansion of the MPP program as a means of heading off President Trump’s threats to impose tariffs on Mexican products if the country didn’t do more to curb the migratory flow from Central America.

A number of people in MPP have said they’ve been raped, kidnapped, beaten and robbed after being returned to Juárez.

At Casa del Migrante, a Catholic Church-run shelter that can hold 800 to 1,000 migrants, O’Rourke talked with Karen, a 19-year-old Salvadoran woman. She entered the United States in April with her parents and younger siblings. She said she was separated from her family and forced to return to Juárez; her family was released from immigration custody and allowed to go to California while their asylum claims were decided.

“It’s a cruelty on a young person who’s already separated from her family, is no longer in her country, has been in Ciudad Juárez for months now, just trying to get help, and is navigating all of this without an attorney,” O’Rourke said at the meeting, which was live-streamed by his campaign.

O’Rourke also talked with a Salvadoran family who said they fled their country after police told them they couldn’t protect them from gang threats. The father, who didn’t give his name, described walking barefoot across parts of Mexico after losing his shoes, carrying his young son on his shoulders. The heat was intense and one man in their group died on the journey, he said.

“Many people do not know, but there have been at least 8,000 migrants and asylum seekers over the last two decades who have died trying to come to the United States of America to escape violence … to contribute to our country. And our policies that we chose, the walls that we’ve already built, this MPP policy that we’re now employing, the metering where we turn people back from our ports of entry, has literally forced people to make this god-awful decision where they’re literally taking their lives into their hands to try to save the lives of their kids and their families,” O’Rourke said.

Child detention in the U.S.

After finishing his conversation with asylum seekers in Juárez, O’Rourke headed back to the United States for a rally at the Border Patrol station in Clint, about 20 miles southeast of El Paso. That is one of the facilities cited by lawyers and health professionals for poor treatment of children, an allegation the Border Patrol has denied. Julian Castro, a Democratic presidential candidate, held a press conference on Saturday at the
Clint Border Patrol station to denounce the Trump administration’s treatment of migrant
children. Photo by Robert Moore for Borderzine.com

O’Rourke was the second Democratic presidential candidate in as many days to visit the Clint Border Patrol station. Julian Castro, a former San Antonio mayor and former secretary of Housing and Urban Development, had a press conference outside the facility on Saturday.

Rep. Will Hurd, a Republican whose district includes Clint, also was at the Border Patrol station on Saturday. He said the facility held about 60 children that day, down from 117 when the media toured the facility on Wednesday and well below a peak of 700 several weeks ago. The facility has cell space to hold 106 children; many have been held in a converted driveway and warehouse.

“We shouldn’t be housing people in these kinds of facilities for any length of time, especially not children,” said Hurd, who disagrees with both President Trump and leading Democrats on how to address migration and border security.

Two Texas Democrats in the House, Veronica Escobar of El Paso and Joaquin Castro of San Antonio, will lead a congressional delegation on Monday that will visit Border Patrol stations in El Paso and Clint. At least 14 Democratic House members are expected to attend, including Rep. Alexandria Ocasio-Cortez of New York.