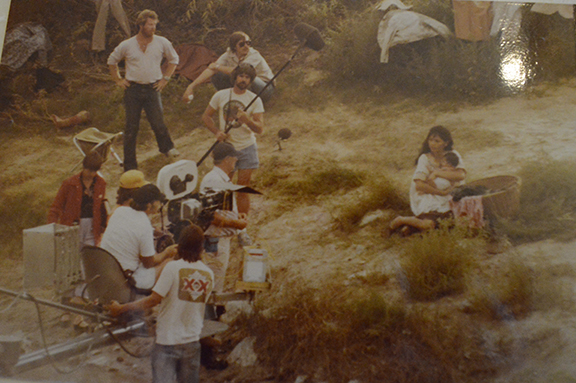 'The Border' was filmed along the El Paso-Juarez border in 1980 with many extras from the area. Photo courtesy Martha Romero.

Nicholas Romero was only six weeks old when he debuted in “The Border,” a movie filmed in El Paso in 1980 starring Jack Nicholson, Valerie Perrine and Elpidia Carillo. Nicholas was one of several infants used to play Carillo’s son. Martha Romero’s newborn son Nicholas was one of several local babies who worked on the set of “The Border” during filming in El Paso in 1980. Photo by Idalia Suarez, Borderzine.com.

“Aw, that’s my baby,” Romero recalled saying when she saw the movie for the first time.

Romero said that having her newborn in a movie was a fascinating experience. She said that the job lasted 50 days and her son had his own trailer on set. Labor laws limited the amount of time each baby could work, so they were switched out throughout the filming.

“It was very hard. I now understand why actors and actresses get paid what they get paid because it was very tedious, boring work.”

“We wanted to show it in part because last year was our 11th year, the festival had never shown that movie and we were working on this concept,” said Doug Pullen, the festival’s coordinator. “It had actually been in development for about three years this idea of doing all these movies that connected back to this area in some way in this case it was shot here but it was set here.”

“We showed about 95 movies last year, 50 of them had some connection to El Paso, Juarez or the Las Cruces area,” Pullen said.

Romero attended the film festival screening. As her husband was waiting in line to get their tickets, she approached one of the festival officials: “I think that you should know that I am the mother of one of the babies that was in the movie.” ‘The Border’ was filmed along the El Paso-Juarez border in 1980 with many extras from the area. Photo courtesy Martha Romero.

Romero said the movie, that tells the stories of a migrant mother and a U.S. Border Patrol agent, stands the test of time 37 years later because it touches on issues that are still happening in the borderland now.

“I would recommend that they see the movie because it’s based on truth and it’s very sad to see people that are looking for a better life trying to come and they bring their small children and endanger their life and as a parent there’s nothing more important to you than your children,” she said.