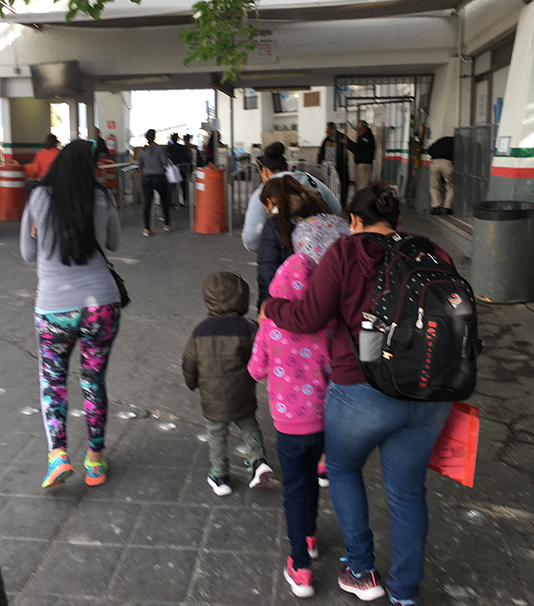 Several Central American families prepared to cross from Ciudad Juárez into El Paso on April 17 for their initial court hearing. They were among the first people sent back from El Paso to Mexico under the controversial Migrant Protection Protocols program.

A 30-year-old Guatemalan woman and her two sons on Friday became the first people to be deported from the United States while taking part in a controversial Trump administration program that requires some migrants to remain in Mexico while their U.S. immigration cases are heard.

“Over there (in Guatemala), if they do something to me my children have somewhere to go. Over here (in Mexico,) they have nothing if something happens to me,” Karla told immigration judge Nathan Herbert in El Paso. Borderzine is not using her full name because she said her family faces threats in Guatemala.

More: On Mexico’s southern border, migrants seek to survive one day at a time

Karla, her 9-year-old son Eddin and her 11-month-old son Ian entered the United States in El Paso on March 25, according to court documents. They were sent to Ciudad Juárez on March 29, among the first people sent back from El Paso under the Trump administration’s Migrant Protection Protocols.

“I want to go back to my country,” she told the judge.

Herbert asked her if she was afraid to go back to Guatemala.

“Yes, but I am even more afraid to be in Mexico,” Karla said, sobbing. She held her baby while her older son, Eddin, sat about 10 feet away on a courtroom bench. At the end of the hearing, Herbert issued an order of removal that will result in the family’s deportation to Guatemala. Attorneys familiar with Migrant Protection Protocols said Karla and her family are the first people in the program to be ordered deported.

Karla’s case illustrates both the hopes of the Trump administration and the fears of its critics in the MPP program, which began in January in southern California in late January and expanded to El Paso in late March.

Karla and her children were ordered deported six weeks after arriving in the United States, at a time when it takes years for courts to rule on cases of migrants released into the United States. Critics have said the Trump administration is deliberately placing migrants in dangerous conditions in hopes they’ll abandon their immigration cases and return home.

Mexican officials have said the United States has sent more than 3,600 migrants back to Mexico under the MPP program since January.  The Ninth Circuit Court of Appeals last week allowed the program to continue while the American Civil Liberties Union and other groups challenge its legality.

Although Karla and her sons were the first people formally deported under MPP, a man from El Salvador on Thursday won permission to return to his country without a deportation order. But that effort triggered confusion and led to a government effort to block him from returning to his home country.

“I left my son, who is very ill,” Elmer, 31, told Herbert at the Thursday hearing. The boy was getting sicker by the day and Elmer said he wanted to go home and resume working in El Salvador so he could care for his wife and two children. By volunteering to end his immigration case, Elmer would avoid deportation, an action that would make it more difficult for him to legally enter the United States in the future.

But Michael Klowsosky, a lawyer for the Department of Homeland Security, objected to Elmer’s request, saying he should be forced to continue his case and be forced to stay in Ciudad Juárez.

“You can’t hold him as a hostage,” said Nancy Oretskin, an attorney from Las Cruces, New Mexico, who volunteered to represent Elmer at his initial hearing in El Paso immigration court.

Klowsosky told Herbert that Elmer couldn’t prove that he had the means to travel to El Salvador, even though Oretskin said she would pay for his bus ticket.

Because Elmer was dropping his efforts to stay in the United States, he would no longer be in the MPP program and might not be allowed by Mexican officials to return and travel through that country, Klowsosky said. He acknowledged that the government had planned to send Elmer back to Mexico at the end of Thursday’s hearing if he hadn’t volunteered to end his case.

Herbert initially granted Elmer’s request that he be allowed to abandon his immigration case and return to El Salvador, over Klowsosky’s objection. The DHS attorney said he had been instructed by “headquarters” to appeal the ruling, which meant that Elmer would be held in Immigration and Customs Enforcement custody for weeks or months while the appeal was decided.

Herbert recessed the hearing to research the law. In an interview during the recess, Elmer said he had hoped to join an uncle in Los Angeles so he could make some money for his family. His eyes were red from weeping repeatedly during the hearing.

During the break, Klowsosky emailed his supervisors and then offered Oretskin a compromise. Elmer would withdraw his request to end his immigration case and instead seek to delay his initial hearing until July 23. If Elmer proved he returned to El Salvador before he was due back in court, his immigration case would be dismissed.

When Herbert returned to court, Elmer approved the DHS offer and the judge gave his blessing. Elmer was taken back to Ciudad Juárez by U.S. immigration agents Thursday afternoon, and he planned to buy a bus ticket to El Salvador.

But Elmer ran into difficulty after leaving court. U.S. border agents declined to return his Salvadoran national identification card, which he would need to return to his home country. It now appears likely that he will have to travel to the Salvadoran consulate in Monterrey, Mexico, to obtain a duplicate copy of the card. That will delay his return to his sick son by several days, said Dylan Corbett, executive director of Hope Border Institute, which has been assisting Elmer.