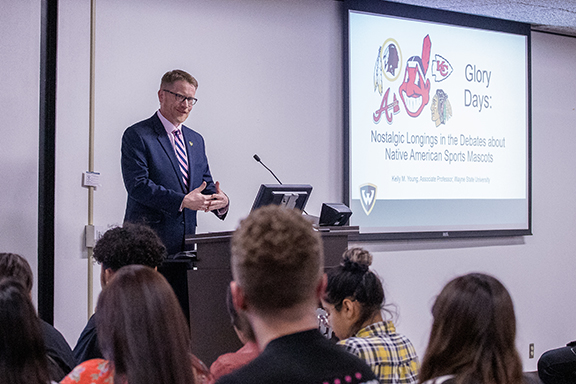 Kelly Young, an associate professor of communication at Wayne State University, introduces his talk for his public lecture about the appropriation of Native American symbols as sports mascots April 22 at UTEP's Blumberg Auditorium. Photo by Gaby Velazquez, The Prospector Daily

The appropriation of Native American symbols as sports mascots is a divisive topic as sports fans enthusiastically support their teams, and others want the mascots replaced, a scholar on the topic said recently.

Young emphasized his love for sports and how his time in Cleveland helped add to his research. “When I was there it was sort of the ground zero of anti-Chief Wahoo protest going on there,” Young said.

For rabid fans, such symbols, are not seen as racist but as symbols of remembrances when they went to games with loved ones. For some members of Native American population, the symbols are caricatures and racist.

Young said he thinks this issue is far more complex than people give credit. “For opponents of Native American mascots, we fall into a trap that its real simple. Clearly these are racist images. We shouldn’t be racist. We should stop it, but I’m really curious on the other side of the equation on why do these fans seem to be drawn to it so much,” Young said at his presentation, sponsored by the Sam Donaldson Center at the Blumberg Auditorium on April 22.

“I’ve been a debate coach for several years and I was working on this project on the Makah Indians and it was just fascinating. They had this debate about wailing and what was their identity as a people, and that led me to shift my entire research into this area of Native American affairs and its just developed over time,” Young said.

Young did not focus exclusively on the Cleveland Indians mascot, and added fans of the Washington Redskins are just as passionate.

During the lecture Young played a YouTube video of Cleveland Indians fans using profanity and flipping off Chief Wahoo protesters outside of the stadium on baseball’s Opening Day.

He wondered why people cared so much about the mascot. Reiterating that he was not against the idea of the mascot but why people so passionately defend them.

From his personal experience there are many people who are clearly not racist, but will defend the symbols. Young said he hopes this research sparks the conversation and helps register that these mascots are problematic.

Young never imagined he was going to be a Native American Rhetoric Scholar, but the interest sparked him one day while doing debate research into representation of Native Americans in sports and museums.

He then goes on to connect the passion of the fans for these mascots is the nostalgia they provide and different connections or family ties.

For example, Dan Snyder, owner of the Washington Redskins, used the nostalgia of his father taking him to games as a reason he would not change the team name in a letter published in the Washington Post published in 2013. Snyder also adds how he would like to share the Redskins tradition with his three children.

Young described how this argument develops in a few different ways. Summarizing that people would argue mascots are meaningless, are being blown out of proportion, and the mascots are just meant to be fun.

The ongoing research will lead to a book-length manuscript on the debate, but no title or release date has been set.