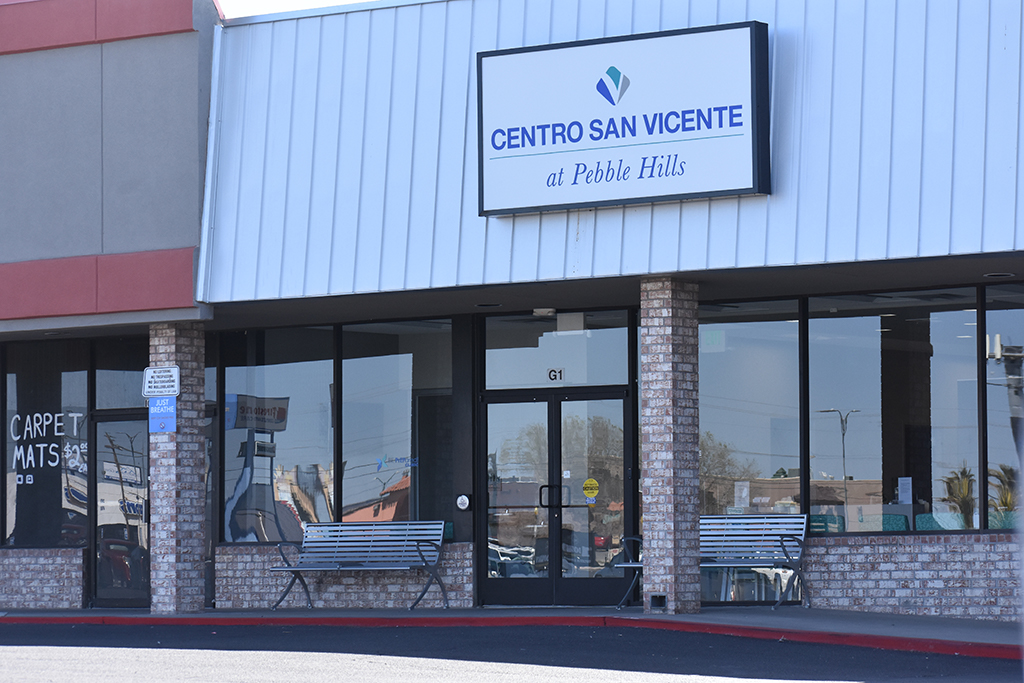 El Pasoan Ventura Villasenor grew up in the aftermath of the AIDS crisis in the 1980s where he lost friends and family members due to HIV complications, but there are now a preventive treatments that give people a chance they didn’t have when the crisis began.

“I think it’s a great opportunity for the gay community, in reality, for anybody who is at high risk of becoming HIV-positive to take advantage of the clinic, of the features that they offer, because they do not only offer HIV testing, they do all types of screenings,” said Villasenor, 39.

Ventura Villasenor, 39, a client at Centro San Vicente at Pebble Hills, says he follows the protocol for Pre-Exposure Prophylaxis (PrEP) medication because it is the responsible thing to do to protect himself and others. Photo credit: Mario Cervantes

A clinic to treat and prevent HIV opened on El Paso’s East Side by Centro San Vicente in the summer of 2018. Villasenor is a patient at the clinic.

El Paso is among the Top 10 counties with HIV cases, according to the Texas HIV Surveillance annual report. It ranks at No. 8 with 139 cases, but the treatments offered at clinics like Centro San Vicente can help reduce that number.

El Paso’s ranking has been steadily improving. The city ranked No. 3 in the nation with the highest HIV prevalence among men who have sex with men.

“It is important for people – heterosexual or homosexual – to be tested, ideally every three months if you have more than one sexual partner, but at least once a year to know your status,” said Manual Duran, a risk reduction specialist.

The federally funded, nonprofit, community health clinic is located at 10780 Pebble Hills. It offers HIV medications and prevention treatments like Pre-Exposure Prophylaxis (PrEP) which is a medicine taken on a daily basis that can protect people from getting HIV.

“Being a gay man, who is sexually active and having known people who have died of HIV complications and AIDS, the responsible thing for me is to be on PrEP,” Villasenor said.

Behavioral prevention calls for the use of condoms, decreasing the numbers of sexual partners, and people regularly checking their status.

The second method is a combination of both but predominantly including medications or treatments that prevent HIV, like PrEP.

There is also Post-Exposure Prophylaxis (PEP), a treatment for cases where an HIV-negative person might have been exposed to the virus. The treatment consists of HIV medications taken within 72 hours of being exposed, and for about 28 days after to decrease the risk of a lasting HIV infection.

The clinic also helps out on getting the treatment more affordable to those patients who don’t have medical insurance.

Joshua Romero, 28, another patient, said: “I do prefer going to this clinic not only because it is affordable, but they do offer many services for low income individuals.” Gonzalez explained how before El Paso previously wasn’t aware about PrEP. People were hesitant and thought the medication was something they could only get in a big city. But now that there is identified providers for it, people are more likely to ask, get informed and get the right treatment if needed, officials said.

“Ever since it opened, the demand for PrEP has definitely gone up, because I think is more of the sense that people know that there’s something out there, there’s a clinic out there, there are people out there that prescribes it.” Gonzalez said.

Centro San Vicente’s mission statement calls for advocating for social justice and giving a voice for the cause of improving the health of the medically underserved.

“If that is right there as a resource to the community, I think it’s great, because not even 10 years ago you could of thought of something like this being available,” Villasenor said.