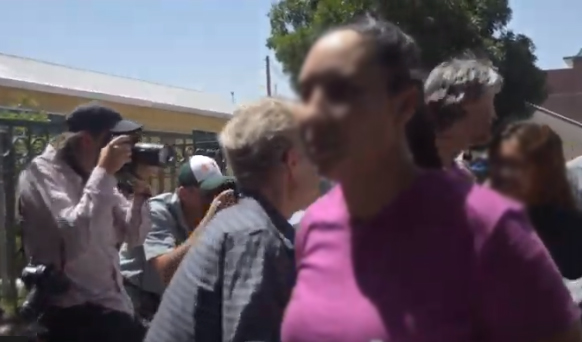 The number of Central American women who make difficult, often harrowing, journeys to the United States to flee domestic and gang violence is rising.

I’m a social science researcher and a social worker who has interviewed hundreds of women after they were detained by immigration authorities for my research about the relationship between violence against women and migration. I find that most female asylum seekers experience trauma, abuse and violence before they cross the U.S. border seeking asylum.

What these women go through while detained by Customs and Border Protection or Immigration and Customs Enforcement can take an additional physical, social and emotional toll.

Most Central American asylum-seekers come from El Salvador, Guatemala and Honduras. These three countries are among the most dangerous places in the world to be female, with some of the world’s highest murder rates, including for women and girls. There are few repercussions for the perpetrators.

As they make their way north, these women are often subjected to sexual violence or held hostage. They may also fall victim to human trafficking – which could entail being made to cook and clean for other migrants or forced into prostitution – on their journeys.

Amid rising levels of violence, the number of Guatemalans, Salvadorans and Hondurans who have sought asylum here has increased almost eight-fold between 2012 and 2017 to about 107,000 according to the Department of Homeland Security.

The government does not disclose how many women are apprehended. But there are clear signs that the number of female migrants is growing. The roughly 189,000 people who arrived with their families, rather than on their own as adults or minors, whom U.S. immigration officials stopped along the border with Mexico during the six months ending in March 2019 were mostly mothers and their children. In contrast, only 75,622 people arrived with their relatives in all of 2017.

ICE is detaining more than 50,000 immigrants at any given time. Most detainees are men, although the percentage of women and girls, and specifically asylum-seeking women and girls, is rising.

The right to seek asylum in the United States due to persecution or fear of persecution back home stems from the 1951 Refugee Convention and U.S. immigration laws. The Trump administration has responded by detaining more asylum-seekers, a policy it casts as a deterrence strategy.

Once apprehended, women may remain detained for months. In some cases they are detained indefinitely as they pursue their claims. New guidance from Attorney General William Barr could lead to more long-term detention for asylum seekers.

In June 2018, former Attorney General Sessions announced that people fleeing domestic violence or gang violence would no longer be eligible for asylum in the U.S. A federal judge struck down that policy change six months later.

According to many studies by scholars like psychologists Katy Robjant and Kalina Brabeck, locking immigrants up can damage their mental health by increasing risks of depression, post-traumatic stress and anxiety. The effects can last years and even a lifetime. For parents, the damage extends beyond detention and may harm children of the detained.

During the past two years, together with psychologists Gabriela Hurtado and Josephine Serrata, I sought to understand and document what immigrant women who have experienced violence and abuse need while they are detained and once they are released.

Many detained women say they have been abused while being held by U.S. immigration authorities in what appear to be inhumane conditions marked by incidents of sexual harassment and sexual assault.

The Department of Homeland Security itself has documented dangers that include the provision of food that isn’t safe to eat, like moldy bread and rotten meat, and delayed medical care.

There are signs of threats and intimidation as well. A woman I’ll call Adelia told my research team that when she asked an immigration official how much money she would have to pay to be released, she was told “stop asking me, or I’ll raise the amount.”

ICE itself has disclosed that 28 women had miscarriages while in detention during the 2017 and 2018 fiscal years.

I have heard directly and through media reports that these immigration detention centers sometimes isolate detained women, either in response to perceived mental health issues or as punishment, leaving them unable to interact with one another, their own children or the volunteer lawyers who are trying to help them.

These practices echo and exacerbate survivors’ experiences with past abuse and violence. That is, detention settings may resemble control tactics used by abusers, traffickers or other perpetrators, compounding previous trauma.

A previously detained woman I’ll call Lourdes described what she experienced as dehumanizing. “You feel like an animal, as if you aren’t worth anything,” she explained.

One problem is how these facilities are set up.

Sandra, another former detainee, spent more than a month in the Karnes County Residential Center in Karnes City, Texas. Having heard it would be shelter for families, she and her daughter were surprised by the barbed wire and razor wire surrounding the facility.

“At the entrance, there were nice glass doors that said, ‘Karnes Residential,’ but that was just a facade,” Sandra said. “It is a jail, a jail for families, families like mine that don’t have anyone in the United States, who come just to stay alive and because they want to see their children alive and well, for things to be better in the future.”

We found that the problems don’t end once women are released from detention.

Rather, survivors face considerable immediate and long-term needs and risks. Right after being released from detention, they may simply be left at a bus station with little or no money, supplies or information about reuniting with relatives. This leaves communities across the country scrambling to fill gaps.

Many of these women, understandably, need help finding medical care, counseling, jobs, lawyers and social services. The rough start they get off to increases their risks of becoming homeless and having trouble making ends meet. It also reduces their ability to pay back the thousands of dollars they borrow to escape violence and to cover their bonds – money the authorities collect upon a detainee’s release that is similar to bail in criminal cases.

They oppose the current detainment practices that seclude, isolate and restrict the ability of survivors of sexual violence to move around freely and to make their own decisions.

Immigrant rights advocates and mental health professionals argue that asylum-seekers should not be held in detention centers. Community-based alternatives would cost less and be more humane. They also advocate for training staff to work with people who have experienced trauma as the victims of violence and coercion.